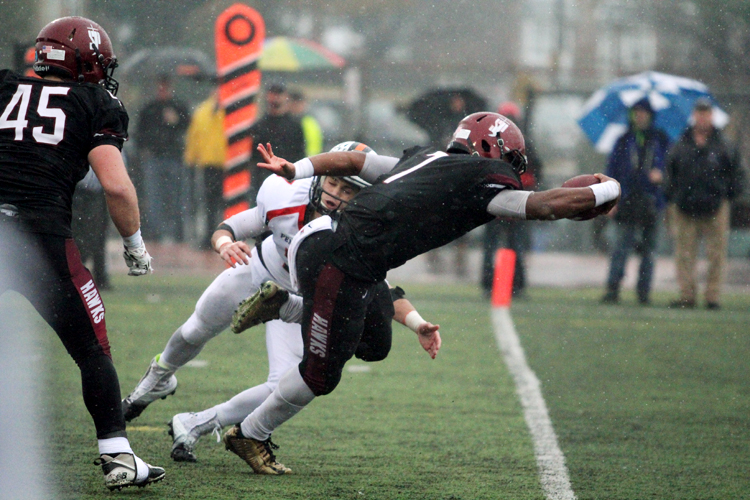 D'Andre Swift stretches into the end zone for one of his two rushing touchdowns in St. Joseph's Prep's 37-7 victory over Pennsbury Dec. 6 at Northeast High in Philadelphia. The win put the Hawks into the PIAA class AAAA championship game Dec. 13 in Hershey, Pa. (Sarah Webb) 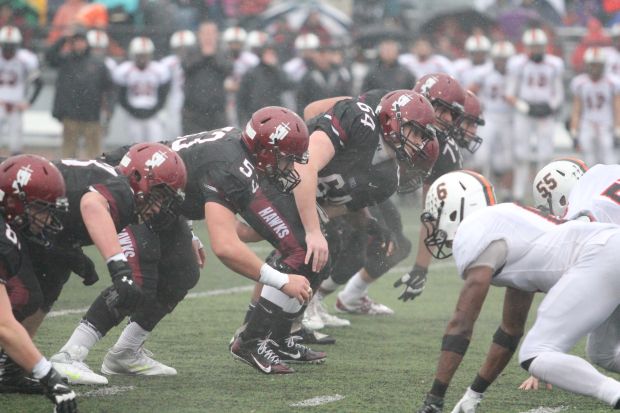 The Hawks, like most successful teams, dominated in the trenches against Pennsbury, as the offensive line moves into action on this snap. (Sarah Webb)

There was a nice-sized crowd at the PIAA Class AAAA football semifinal Dec. 6 at Northeast High School in Philadelphia, but maybe even more people would have braved the cold, rainy weather if they had known that Santa Claus was going to be giving out lots of presents.

Taking advantage of three consecutive fumbles and turning all of them into touchdowns, St. Joseph’s Prep walloped the Falcons, 37-7. The victory propelled the Hawks into the state championship against undefeated Pine-Richland at 6 p.m. Saturday, Dec. 13, at Hershey, Pa.’s HersheyPark Stadium.

The Prep will be making its second straight visit to the state final. Last year, the Hawks played an indomitable second half and spanked then-undefeated Pittsburgh Central Catholic, 35-10.

“The only thing you can hope for is having an opportunity,” said Prep senior quarterback Jack Clements. “We worked very hard to put ourselves in this situation. Now we have to do our best to repeat.”

Although the Hawks might have been favored against Pennsbury, it was still rather startling to watch the scoreboard constantly increase the amount of Prep points. Following the three straight fumbles, the Hawks’ torrid running game produced 20 points off touchdown runs of 22 yards by sophomore D’Andre Swift, four yards by Swift again (his team-leading 10th of the season), and then 26 yards by senior Jim Bell.

From that point, the Prep throttled Pennsbury’s offense before adding two more touchdown runs by seniors Justin Montague (six yards) and Benny Walls, whose 73-yard scamper down the left sideline was the definition of highlight-reel worthy.

Walls broke three tackles and followed two great blocks by Montague and was elated — not to mention thoroughly exhausted — when he reached the end zone.

“That was definitely a team effort,” Walls said, referring to his fifth touchdown of the season. “There’s no way I do that on my own.”

With the score 34-0, senior Nick Bill did everybody a major favor when he drilled a 29-yard field goal on the second play of the fourth quarter. That increased the Prep’s “edge” to 37-0 and allowed the game clock to move without interruption. Pennsbury did break the shutout, but at that point, the Prep’s personnel had the look of a junior varsity squad.

Clements, who only had to throw six passes and complete four of them for 42 yards, didn’t mind not being in the spotlight.

“We have a great running game,” he said. “Our passing game feeds off the running game. And when something is working, why change it? Those guys do a great job. You can put so many different people back there and they always do well. They’re talented runners and our offensive line is amazing.” 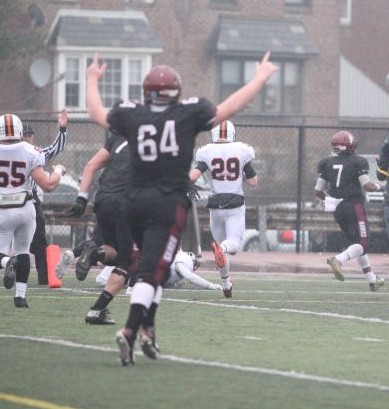 D’Andre Swift scores and his teammates celebrate ahead of their dominant state semifinal win, 37-7.

The Prep’s gaudy offensive statistics support Clements’ brief analysis. The Hawks, now 10-3 overall and riding a nine-game winning streak, have scored 62 offensive touchdowns. Of those, 38 have come via the run and 24 by the pass — all of them thrown by Clements.

Half of the TD receptions have been snared by John Reid, but the Penn State-bound star receiver and cornerback was injured in the district championship win over Ben Franklin and has been unavailable in the Prep’s two state tourney triumphs. Reports of his potential to play in the state final range from questionable at best, to doubtful at worst.

“You can’t replace a player like that,” said senior Olamide Zaccheaus, who, in addition to rushing for nine touchdowns, catching four more, and gaining 1,611 yards from scrimmage, is also a defensive back. “Other guys have had to step up, but that is the mark of a good team. You can’t rely on just one player. It takes all of us.”

When a team is on the verge of being considered the best in the entire state of Pennsylvania for a second straight year, that philosophy is tough to argue.

Last Friday, Dec. 5, the Vikings (13-1 overall) overwhelmed Somerset, 63-20, and will attempt to win their second straight championship at 7 p.m. Dec. 12 at HersheyPark Stadium, where they will face Central Valley High School.

This will mark Wood’s fourth straight trip to the final. The Vikings won also won the 2011 state title.

In their win over Somerset, senior Jarrett McClenton continued to augment his individual totals in what will go down as the greatest career by any Viking. Already the school’s all-time leading rusher, McClenton carried the ball 12 times and finished with 230 yards and three touchdowns.

This was the 10th time this season that McClenton has reached triple digits in rushing yardage and the fourth in which he has surpassed 200 yards. McClenton has now scored 38 touchdowns this fall.

NEXT: Speedy Morris closing in on career milestone