Heisman Trophy winner: Everything he does is for God’s glory 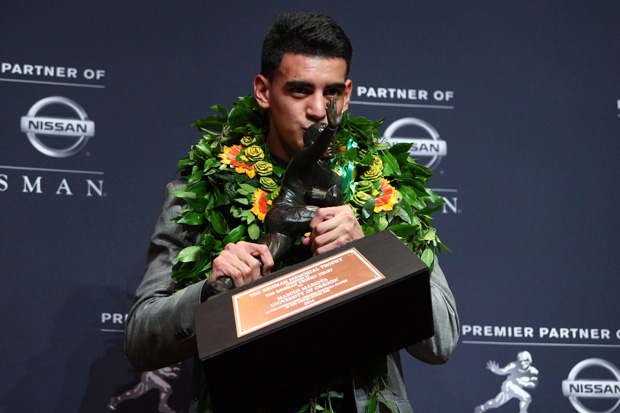 Oregon Ducks quarterback Marcus Mariota kisses the Heisman Trophy during a Dec. 13 news conference at the New York Marriott Marquis after he was named the recipient of the trophy. Mariota is not Catholic but he regularly attends team Masses and graduated from an all-boys Catholic high school in Honolulu. (CNS photo/Brad Penner, USA Today Sports via Reuters) 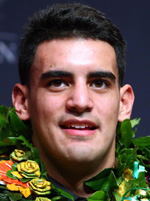 Marcus Mariota, the University of Oregon’s dual-threat quarterback, is a 2011 graduate of historic St. Louis High in Honolulu. Though he and his family are not Catholic, Mariota attended Mass at St. Louis and also is a regular at the Ducks’ weekly team Masses and shows up at campus ministry liturgies on occasion.

“He is a great kid,” said Dominican Father Peter Do, pastor at St. Thomas More Newman Center in Eugene. “He is very humble.”

In an interview before the 2014 football season, Mariota told the Fellowship of Christian Athletes Magazine that faith plays a major role in his life.

“When things start to get rough, you find comfort in your faith,” he said. “Knowing that no matter what, you can dust yourself off and be OK. And you know you do it for (God’s) glory. You do it for your teammates, your family, but also for his glory and to represent his name.”

Mariota told the publication that his faith is “the steadying force that’s pushed me, along with my family, my friends and my teammates.”

He spoke of a responsibility to represent God and his family “in the right light.” You do that through God’s power he said, but also by maintaining fellowship with other believers who become your family away from home.”

In a state without a professional sports team, Mariota has become a universal hero in Hawaii, not just because of his play, but because of the way he lives his life.

Mariota is of Samoan and German descent. At St. Louis School, founded in 1846, he was a star in both track and football. But he also was known as a good person. A school photographer once caught him helping a younger student learn how to tie a necktie.

“What an outstanding young man,” said Alvin Katahara, chief marketing officer for St. Louis School, which has 600 students in grades 6 through 12. “We are just so proud of him. Everyone knows about his outstanding achievements in football. On top of that, he is just such a wonderful role model for the kids here and all the kids in the state.”

A crowd in the St. Louis gym watched the Heisman award announcement Dec. 13 on a big screen. When their local boy was called forward during the event at the New York Marriott Marquis, the group went berserk.

The day after winning, Mariota showed his true colors in New York, visiting with sick children and laying a wreath at the 9/11 memorial.

One story circulates around the Ducks’ team. A teammate once had car trouble a few hours south of Eugene, Oregon. Mariota drove the whole distance, helped get the vehicle going and then refused payment for gas.

NEXT: Four Horsemen of the Backfield — how the Prep captured a state title