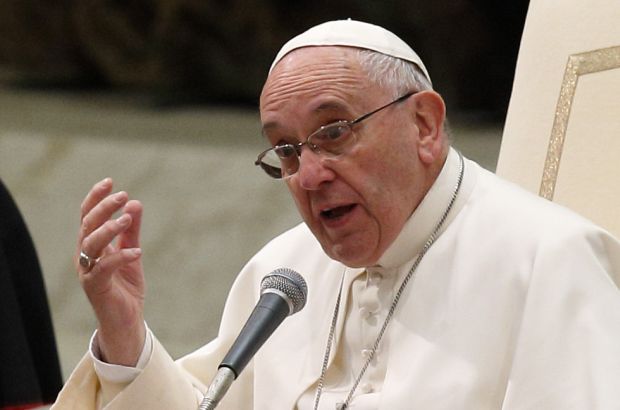 VATICAN CITY (CNS) — Courses in yoga, Zen meditation, even extensive studies in church teaching and spirituality can never free people enough to open their hearts to God and his love, Pope Francis said in a morning homily.

Only the Holy Spirit can “move the heart” and make it “docile to the Lord, docile to the freedom of love,” the pope said Jan. 9 at Mass in the Domus Sanctae Marthae.

The pope looked at how Jesus’ disciples could fail to recognize and be open to the Lord’s miracles, like his walking on water, the multiplication of the loaves and encountering him on the road to Emmaus.

“They were the apostles, those closest to Jesus. But they didn’t understand,” he said, according to the Vatican newspaper, L’Osservatore Romano.

“It was because their hearts had been hardened,” he said.

“But how does a heart harden? How is it possible with these people who were always with Jesus, every day, who listened to him, saw him … and their heart was hardened.”

The pope said he had asked his secretary why he thought people’s hearts become so closed and cold. Together they came up with a number of reasons that often affect many people in life, he said.

Painful and difficult experiences can cause people to harden their hearts because they do not want to be vulnerable to “another ordeal” or be disillusioned once again, the pope said.

He said the saying in Argentina, “If a person gets burned by milk, then he will cry when he sees a cow,” expresses this idea of becoming fearful after a painful experience.

Pride, vanity, smugness and a sense of superiority can lead people to become closed up within themselves, he said.

“Religious narcissists” also “have a hard heart because they are closed, they are not open. And they try to defend themselves with these walls they build up around themselves,” he said.

Insecurity causes people to look for things “to grab onto to be secure,” he said, like the Pharisees and Sadducees who were “so attached to the letter of the law.”

They may feel safe and secure, the pope said, but they are like someone “in a jail cell behind bars: It is a security without freedom,” and it was freedom that Jesus came to bring humanity.

God’s perfect love “crushes fear,” he said, because “in love there is no fear because fear assumes punishment and whoever is afraid is not perfect in love. He is not free. He is always afraid that something painful or sad will happen.”

The problem is a heart lacking love, a heart that has not learned how to love, he said.

“Who teaches us to love? Who frees us from this hardness?” he asked. “Only the Holy Spirit.”

The Holy Spirit “moves” hearts and compels people to cry out, “Father,” and become docile to “the freedom of his love.”

NEXT: If husband is ‘born again,’ does he need to fix the house?