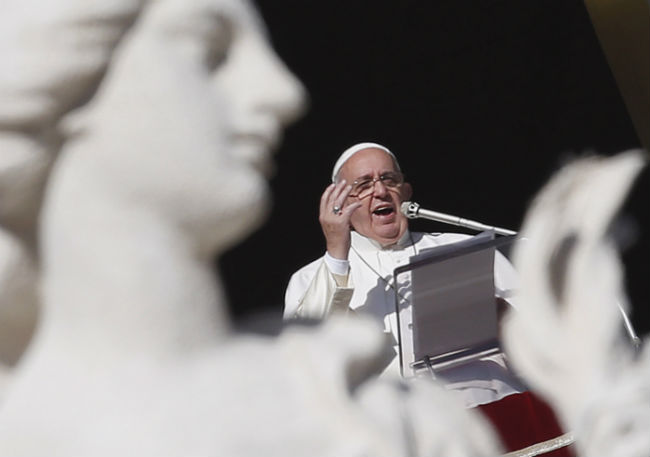 Pope Francis gestures as he leads the Angelus from the window of his studio overlooking St. Peter's Square at the Vatican Jan. 1. (CNS photo/Alessandro Bianchi, Reuters)

VATICAN CITY (CNS) — Peace is a gift that comes through prayer and through small daily efforts to sow harmony in one’s family, parish and community, Pope Francis said.

“At the beginning of this new year, we are all called to reignite in our hearts a spark of hope, which must be translated into concrete works of peace: You don’t get along with that person? Make peace. In your home? Make peace. In the community? Make peace. At work? Make peace,” he said Jan. 4 during his midday recitation of the Angelus.

Before announcing the names of the 20 new cardinals he will create Feb. 14, Pope Francis used his Sunday Angelus address to continue the reflection on peace, on Mary and on the church that he began during a Mass Jan. 1 marking the feast of Mary, Mother of God, and the World Day of Prayer for Peace.

Everyone says they want peace, Pope Francis said, but they continue to make war, even on a small scale. “How many families, how many communities — even parishes — are at war,” he said.

Describing Mary as the “queen of peace,” the pope said that during her earthly life she knew difficulty, “but she never lost her peace of heart, a fruit of having abandoned herself with trust to the mercy of God. We ask Mary, our tender mother, to point the whole world to the sure path of love and peace.”

Reciting the Angelus Jan. 1, he reminded people that the theme of his 2015 peace day message was “No longer slaves, but brothers and sisters.”

“War makes us slaves always,” he said. “We are all called to combat every form of slavery and build brotherhood. And remember, peace is possible.”

“Thanks to our baptism, we were introduced into communion with God and we are no longer at the whim of evil and sin, but we receive the love, tenderness and mercy of the heavenly Father,” he said.

Earlier Jan. 1, Pope Francis celebrated Mass in St. Peter’s Basilica and focused his homily on Mary as both the mother of God and mother of the church.

“Jesus,” he told the congregation, “cannot be understood without his mother,” the one who gave him human flesh, raised him and was near him always, even as he died on the cross and rose from the dead.

“Likewise inseparable are Christ and the church,” he said. And, just as Mary brought Jesus into the world more than 2,000 years ago, the church continues to bring him to the world, he said.

The church brings Christ to people, nourishes people with the sacraments and helps them understand what it means to belong to Christ, the pope said. “Our faith is not an abstract doctrine or philosophy, but a vital and full relationship with a person: Jesus Christ, the only-begotten Son of God.”

“Without the church,” the pope said, “Jesus Christ ends up as an idea, a moral teaching, a feeling. Without the church, our relationship with Christ would be at the mercy of our imagination, our interpretations, our moods.”

PREVIOUS: The pope said what? It could be a Facebook mash-up

NEXT: Only by loving, serving others can people come to know God, pope says