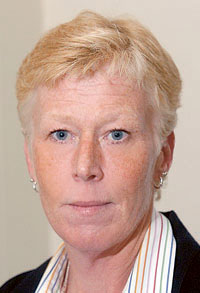 It’s easy to fool yourself into thinking you are the best parent in the history of parenting – especially if your children are good, decent people who are responsible, make intelligent decisions and live the lives of boy scouts or girl scouts (or at least lead their parents to believe those things).

But every once in a while a situation arises, an event happens, or a word is spoken to bring you back down to the world of average (perhaps even below-average) parenting.

There are times I have smugly regarded myself as a terrific parent. I use the word smugly because it should indicate that I was incorrect in that assessment. But in my defense, my kids have forced me down that road.

My daughter is a sweet, compassionate, considerate and intelligent young woman who is carving a terrific career as an educator. But truth be told, she did much of that on her own. Her father and I basically gave her an outline for life, and she pretty much filled in the gaps. Now in my smug way of thinking, it was genetics (from my blood line) that has allowed Kaitlyn to grow into such a terrific person.  So in a very basic way, I score that win for mom.

And I’m relieved to report my older son has discovered the reason he’s going to college, and scored grades that were personal bests in his educational record. Oh, throughout the course of his learning Tommy has gotten As and Bs, but this time they were all in the same marking period – a milestone. Aside from his fondness for aggravating me when it comes to his academic accomplishments, Tommy scores wins with me all the time with his common sense, his compassion (for his little brother, not for his older sister), and his humor (usually at the expense of his older sister).

This could all be a ruse, but he has led me to believe I’ve raised a perfect son in him. Really, that isn’t surprising since my mom always said (with what I always detected as a smirk) she raised five perfect children. Smirk or not, it’s genetic, so I count the win.

I would love to proclaim that the wins kept coming, but, I’m pretty sure my streak stops there. It’s been a slow realization, but one I have finally accepted. While Matthew certainly is a major victory, he’s not mine or his dad’s alone. In fact, the hard truth might be that I’ve held him back simply because I didn’t recognize all the possibilities. And for anyone who has a child with special needs, you know the worst thing a parent can do is fail to dream of – or at least consider — possibilities.

Fortunately, I’m surrounded by many smart people who don’t let my short-sightedness do much damage to Matthew, who has Down syndrome.

The list of people who expect nothing short of greatness from Matthew is countless, thank God. But the latest hero in Matthew’s life story is Father Gus Puleo, our pastor at St. Patrick Parish in Norristown.

For a few months now Father Gus has been asking me when Matthew could start his career as an altar server. I had no doubt he’d be able to do it, but when he was older. Altar serving is basically routine, and routine, in Matthew’s mind, is good and preferable. He’d be great once serving became routine, but he’d have to practice, right? Plus, Matthew, who believes all the world is his stage, would probably use the opportunity to entertain those sitting in the pews. And when I’m at Mass, I like to use that time to decompress. Matthew on the altar … well, my head could very well explode.

All good and logical excuses, but Father Gus would have none of them. He said simply and matter-of-factly, “he’ll be fine.”

So a few weeks ago I got a note from Matthew’s teacher at St. Katherine Day School that Matthew would be an altar server for the Advent Mass, and that Father Gus was celebrating the Mass. Could I be there?

I wrote Miss Cas (Gina Casalinuovo) back, saying I wouldn’t miss it for anything. But my palms started to sweat right then. It was too much responsibility with no preparation. And altar serving was important business, right?

But the Mass was at school, in a relaxed atmosphere, and one of the older students serving would do most of the work. So I was able to revel in it — even the post-homily thumbs up Matthew gave Father Gus, and the high-five in place of a handshake for the sign of peace.

All in all, it was a success – but it created a monster. Matthew wanted more time on the altar.

So a few weeks ago, minutes before Mass at St. Patrick’s was to start, Father Gus grabbed Matthew, got him in a server’s robe, and celebrated Mass with a little strawberry blonde-headed kid by his side.

When I did muster the nerve to watch Matthew on the altar – I had to fight back the tears. Who would have thought, 12 or 13 years ago, that this little kid would be standing on the altar in the church I grew up in, doing something I never did – serving Mass? It was overwhelming, unbelievably heart-warming and – most of all – eye-opening.

It made me realize that when you let other people determine what your child is capable of, very good things can happen.

Had it been left to me, Matthew would never have made it to the altar that day. My fears, or at least my doubts about his abilities – would have kept Matthew in that pew with me and his dad – and he would have not have had that experience.

Father Gus was able to see past the limitations I put up – and ignore them – and created something for Matthew that most people in church that day will always remember. I know I will never forget it.

In my mind, the two of them together – Father Gus and Matthew – represent what a good life is all about – purity and goodness of heart and mind, with the intelligence to ignore, and in turn surpass, limitations.

***
Cheryl Kehoe Rodgers is a member of St. Patrick Parish, Norristown. She can be reached at crodgers@timesherald.com.

PREVIOUS: The message of reform behind the pope’s Christmas message

NEXT: Year of Consecrated Life: Time to thank God for ‘powerhouses of prayer’