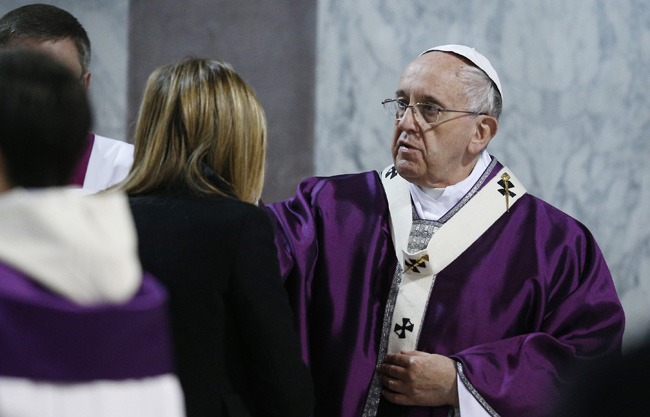 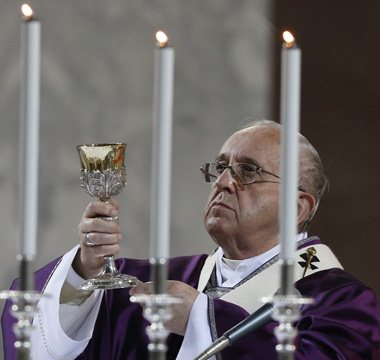 ROME (CNS) — Lent is a journey of purification and penance, a movement that should bring one tearfully back to the loving arms of the merciful Father, Pope Francis said at an Ash Wednesday Mass that began with a procession on Rome’s Aventine Hill.

After walking from the Benedictine monastery of St. Anselm to the Dominican-run Basilica of Santa Sabina Feb. 18, Pope Francis celebrated Mass. He received ashes on the top of his head from Cardinal Jozef Tomko, titular cardinal of the basilica, and distributed ashes to the Benedictines, the Dominicans, his closest aides and a family of five.

When a priest places ashes on one’s head or forehead, he recites: “Remember that you are dust and to dust you shall return” or “Repent and believe in the Gospel.”

Both, Pope Francis said, are “a reminder of the truth of human existence: We are limited creatures, sinners always in need of repentance and conversion. How important it is to listen and accept these reminders.”

In his homily before the ashes were distributed, the pope encouraged Catholics to ask God for “the gift of tears in order to make our prayer and our journey of conversion more authentic and without hypocrisy.”

The day’s first reading, Jl 2:12-18, described the Old Testament priests weeping as they prayed that God would spare their people. “It would do us good to ask, do I cry? Does the pope cry? Do the cardinals? The bishops? Consecrated people? Priests? Do tears come when we pray?”

In the day’s Gospel reading (Mt 6:1-6, 16-18), Jesus warns his disciples three times against showing off the good works they do “like the hypocrites do.”

“When we do something good, almost instinctively the desire is born in us to be esteemed and admired for this good action, to get some satisfaction from it,” the pope said. But Jesus “calls us to do these things without any ostentation and to trust only in God’s reward.”

“Do you know something, brothers and sisters, hypocrites do not know how to cry,” the pope said. “They have forgotten how to cry. They don’t ask for the gift of tears.”

The Lenten call to conversion, he said, means returning “to the arms of God, the tender and merciful father, to cry in that embrace, to trust him and entrust oneself to him.” 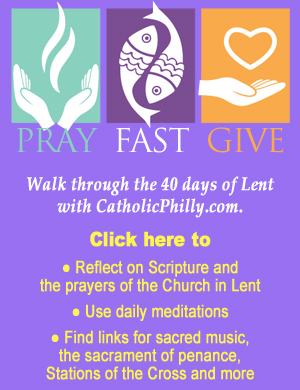 During the 40 days of Lent, he said, Christians should make a greater effort to draw closer to Christ, which is why the church recommends the tools of prayer, fasting and almsgiving.

But, he said, “conversion is not just a human work. Reconciliation between us and God is possible thanks to the mercy of the Father who, out of love for us, did not hesitate to sacrifice his only-begotten son.”

In the reading from Joel, the prophet calls people to “interior conversion,” the pope said, a conversion that requires a return to God “with your whole heart.”

“Please,” the pope said. “Let’s stop. Let’s pause a while and allow ourselves to be reconciled with God.”

Lent, he said, is time “to begin the journey of a conversion that is not superficial and transitory, but a spiritual itinerary” that goes straight to a person’s heart, the focal point “of our sentiments, the center in which our choices and attitudes mature.”

What is more, he said, the reading makes clear that the call is addressed to the whole community, which is to “proclaim a fast, call an assembly; gather the people, notify the congregation; assemble the elders, gather the children.”

PREVIOUS: God created light – may we shed it on people in darkness