Love for Emily: Parish rallies for sick girl, and everyone benefits 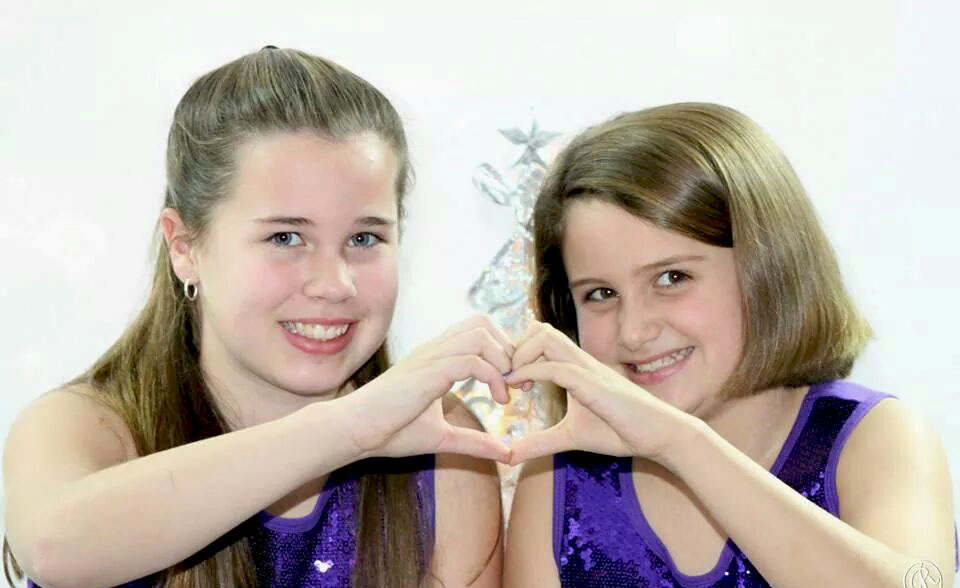 Amanda Dougherty, 12 (left), donated bone marrow to provide a treatment for her sister Emily, 10, who is recovering from a rare and serious blood condition. The school and parish community of St. Mark in Bristol is providing good spirits and tangible aid to Emily and the Dougherty family.

Emily Dougherty admits to being scared when she was told she had aplastic anemia last fall. The 10-year old understood she was seriously ill and would have to undergo grueling treatments at Children’s Hospital of Philadelphia.

She may have been frightened but she was also very brave, said her parents, Jen and Chuck Dougherty of St. Mark Parish in Bristol.

“The world stopped that day when the doctor told us. It was the last thing we expected,” Chuck said.

One reason for the shock was that Emily had exhibited no symptoms except for some unusual bruising that the family believed could be easily explained by the family doctor.

But blood tests punctured hope. Emily, a fourth-grade student at St. Mark School, is a dancer and a soccer player. She had none of the fatigue that usually accompanies the condition, her mother said.

Aplastic anemia is a rare and serious condition that occurs when the body stops making red blood cells. Treatments range from medications to blood transfusions to a stem cell transplant.

Even as the earth shifted for the Doughertys, their extended parish “family” swung into action to assist with prayers, financial support and good cheer during last December’s holiday season. Once it was learned that Amanda needed a bone marrow transplant, the first order of business was a blood drive in the school auditorium, said parishioner Janine LaRosa.

“We were shocked and alarmed at first, but then everyone started asking what we could do,” LaRosa said.

What a growing band of volunteers did was use the blood drive to test marrow that might match Emily’s. At the same time, the group also sold purple “Team Emily” T-shirts — purple is Emily’s favorite color — and bracelets. Donors could also choose pastries from the bake sale tables.

Response was overwhelming. The Spanish-speaking members of St. Mark’s gave donations, as did members of other parishes including St. Michael the Archangel Parish in nearby Levittown.

The children of St. Mark School prayed every day for Emily, and St. Mark’s church pews were packed on the night of a special prayer service.

As Chuck Dougherty walked into the church the night of the service, he was amazed at the turnout and at the well wishes of friends and people he saw at church but really didn’t know.

“I never knew so many people cared about us,” Chuck said.

Christmas was approaching quickly even as preparations for the transplant were underway. Money was tight because Jen had to take leave of her job as a teacher’s assistant at the Pen Ryn School in Fairless Hills. That spurred the congregation to provide not only assistance, but a lot of cheer.

LaRosa and several others sought donations for a “money” tree to take to the family on a Sunday afternoon. Dozens of participants, including St. Mark’s pastor, Father Dennis Mooney, and the parochial vicar, Father Sam Verruni, gathered to sing carols on the lawn of the Dougherty home.

They had with them a Christmas tree decorated with money, gift cards, greetings, or whatever else anyone wanted to put on it.

“This response demonstrated the environment we have created here at St. Mark,” Father Mooney said. “As large as our parish is, we are a small family and that’s what we should be: a church family.”

The biggest surprise that day was a fire truck, arranged at the last minute by one of the students’ parents, Mike Myers. He called Tony Bucci, assistant chief of America Hose Hook and Ladder, and asked if he could get a fire truck to lead the festivities.

“He responded immediately. He told me he’d be there in 10 minutes,” Myers said, adding that a block-long procession trailed behind the truck.

LaRosa’s niece, Molly Corrigan, and friend Theresa Lawless helped decorate the tree; carols filled the afternoon air on the Dougherty’s quiet street, and the finale was a duet with Conwell-Egan Catholic High School students Tara Dougherty and Olivia Smith singing, “What Child is This.”

Everyone in attendance was affected by the event, Myers said.

“My wife, Dawn, and I — and all of us, really — felt a community and religious warmth with our church. We all really wanted Emily to feel loved and that prayers were coming her way. We wanted her to know that we were all in this together,” he said.

As moving as that celebration was, the family sees the best gift of all as coming from Emily’s sister, Amanda. The two girls were always close, but when tests revealed that Amanda’s marrow was a perfect match for Emily’s, she didn’t hesitate.

Emily was scheduled for her transplant on Dec. 17 at Children’s Hospital of Philadelphia, which has a special bone marrow transplant unit.

Emily’s first ordeal was the chemotherapy aimed at destroying her own marrow to clear the way for the transplant. She and Amanda were wheeled into surgery for the procedure that would separate them for several weeks.

Both girls came through the procedure well, Jen said. Emily is at home now and doctors are monitoring her closely. She’s housebound for now and passes the time playing with her dolls or talking to friends by telephone. But she can’t wait to get back to school.

She will be able to leave her house to go to church in April, but she won’t be allowed to mix with big crowds until June, so she’ll have to attend Mass from up in the choir loft. Her hair hasn’t grown back yet but she’s ready to get back to normal, she said.

“This was scary but I was so glad to know that a lot of people were around and they made me feel good and feel loved,” Emily said.

While she won’t return to school until next year, St. Mark teacher Amy Del Rossi visits the Dougherty home to keep Emily up on her studies. St. Mark Principal Maria Sanson said the response to Emily’s plight by so many people reflects the generosity and spirit of the parish.

“When someone in St. Mark Parish is hurting, we all hurt. We all share each other’s joy and pain as one family,” Sanson said.

Jen said that her daughter’s ordeal and the outreach of fellow parishioners have energized her own faith.

“You could feel it when people were praying for you,” she said. “If people doubt the power of prayer, well, I’d tell them differently. This is why we’re a parish. This is why we send our kids to Catholic school.”

Elizabeth Fisher is a freelance writer in Bucks County.

PREVIOUS: Hundreds expected to Man Up for conference

NEXT: Before World Meeting of Families, parishes prepare for its aftermath