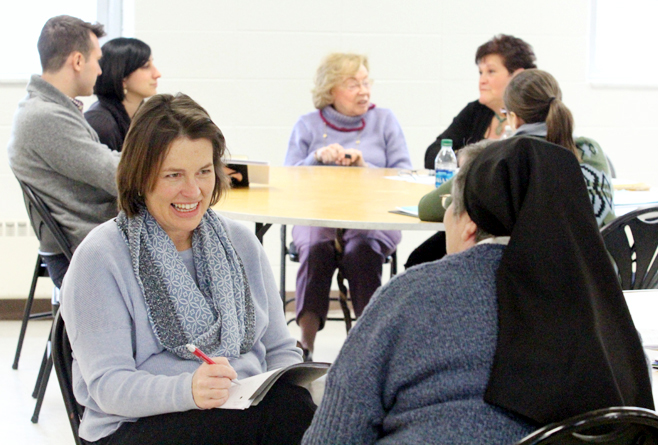 When Pope Francis visits Philadelphia this September following the World Meeting of Families, in addition to the huge numbers of the faithful in town hoping to see and hear the Holy Father, it’s a certainty there will be thousands of journalists all trying to get a unique quote, if not from the lips of Francis himself but from people who came to see and hear him.

Since there will be far too many for the Communications staffs of the archdiocese and the World Meeting of Families to serve, an invitation went out for volunteers who are knowledgeable in the faith to attend weekend training sessions so they will be able to articulate the faith in the public square as needed.

In a letter last December, Archbishop Charles Chaput said more than 5,000 reporters are expected to be present in Philadelphia for the families’ congress Sept. 22-25 and the papal visit Sept. 25-27.

“We’re going to need well-informed priests, religious and lay people from across the archdiocese who represent the broad spectrum of our diverse Catholic family to help us speak to the media about Church teaching on a variety of matters,” he said.

He invited local Catholics to attend training sessions offered by Catholic Voices USA in conjunction with the Communications Office of the Archdiocese of Philadelphia and communications personnel with the World Meeting of Families.

The purpose is not to tell people what they should say but rather how they should express it, and the techniques are effective no matter what the topic. By coincidence when Catholic Voices UK was founded, the first issue they dealt with was a visit by Pope Benedict XVI to England.

The initial training sessions were held at St. Charles Borromeo Seminary in January and most recently on Friday evening, Feb. 20 and Saturday, Feb. 21. Fifteen people had signed up to come to last week’s sessions, according to Lizanne Magarity-Pando, director of communications and marketing for the World Meeting of Families.

(See a photo gallery from the sessions here.)

Considering the terrible weather conditions on Saturday, it would not have been surprising if there were a number of cancellations. The opposite was true. Eighteen people showed up, including some who had not pre-registered. It augers well for the program that will have at least three more training sessions in coming months, one more at St. Charles Seminary and two at the Archdiocesan Pastoral Center in center city Philadelphia.

Leading the training sessions of Catholic Voices was Kathryn Jean Lopez, one of the founders of CV in the United States.

“Catholic Voices exists in the United States to help Catholics articulate the faith in the public square,” Lopez said. “At the core of the CV approach are 10 civil communications principals that aim at shedding light, not heat, in conversations involving often contentious issues. The CV priority is witnessing.”

One of the first training programs CV USA conducted was at the time of the U.S. bishops’ “Fortnight for Freedom” campaign for religious liberty, Lopez said. Other sessions have been done in New York, Boston, Washington, D.C., San Diego and Lincoln, Nebraska.

Here in Philadelphia, “we are focusing on the family and Pope Francis because that is what the World Meeting will be about and what brings the media to the City of Brotherly Love,” Lopez said. “Appropriately, our sessions aim to help participants lead those conversations with love. Where there may be confusion, misinformation and hostility, our sessions involve models and exercises that help reframe those narratives and provide a clearer window into the beauty of Church teachings in concrete ways.”

Both Magarity-Pando and Lopez were more than pleased with the initial weekend training session, and look forward to the coming sessions.

Father Carl Janicki, director of campus ministry at Cabrini College in Radnor, was a member of the first group trained and was impressed by the professionalism and the positive support they were given as they went through the training.

“I came away immediately as a better communicator,” he said. “I know that they were training us for the World Meeting of Families, but if I walk into a class that I teach I will be a better teacher because of some of the tips that they shared.”

Fran O’Donnell, a member of St. Genevieve Parish in Flourtown, sells real estate for a living but was at the weekend meetings to learn how to sell the Good News of the Lord.

He marveled at the mixture of people — priests, deacons, nuns including a sister from Nigeria, engineers, salespeople. “When you came down to it we were all family and that’s what it is about,” he said. “We bonded in the faith, we had fun and we learned from each other.”

PREVIOUS: Before World Meeting of Families, parishes prepare for its aftermath