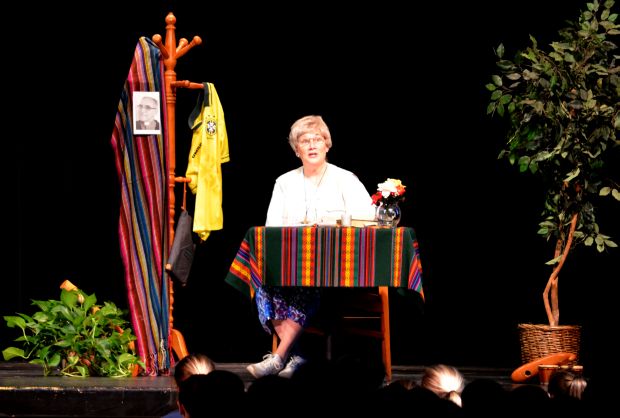 Sister Nancy Murray performs a one-act play at the Academy of Notre Dame in memory of Sister Dorothy Stang, murdered 10 years ago in Brazil.

In observance of the 10th anniversary of the murder of Sister Dorothy Stang, SNDdeN, the Parents’ Association of the Academy of Notre Dame in Villanova cosponsored a one-act play Feb. 12 performed by Sister Nancy Murray, an Adrian Dominican sister-actress and sister of actor Bill Murray.

The performance chronicled Sister Dorothy’s work as a fierce advocate for the rural peasants of Anapu, Brazil, and a defender of a sustainable development project for the Amazon forest. Sister Dorothy had lived in the Brazilian town for nearly four decades crusading for the poor families in the small South American town, who were exploited by criminal gangs who sought their land.

The students enjoyed Sister Nancy’s depiction of Sister Dorothy’s outspoken efforts on behalf of the people and the environment, which eventually cost her life as she was brutally murdered.