God forgives and expects you to do the same, pope says 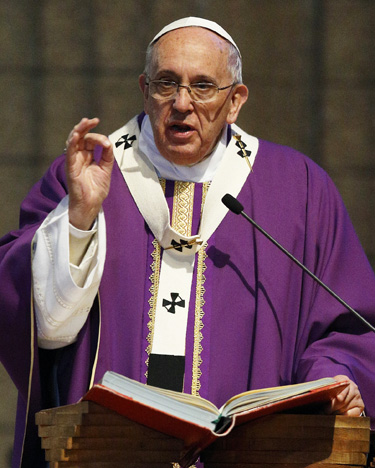 “If I am not capable of forgiving, I’m not capable of being forgiven,” he said March 10 in the homily at his early morning Mass in the Domus Sanctae Marthae where he lives.

The day’s Gospel reading, Mt. 18:21-35, begins with Jesus telling his disciples they must forgive others “77 times,” which means “always,” the pope said.

While God is all powerful, he explained, God stops at the “closed door” of a heart not truly interested in forgiveness.

In the Lord’s Prayer, which Jesus himself taught the disciples, people say, “Forgive us our trespasses as we forgive those who trespass against us.”

“God always forgives, always,” he said. “But he asks that I forgive. If I don’t forgive, in a certain sense I am closing the door to God’s forgiveness.”

Pope Francis also said asking God’s forgiveness for having committed a sin is much more than the equivalent of saying, “Oops, I goofed.”

“Sin is not just a simple mistake,” he said. “Sin is idolatry. It is adoring the idol, the idol of pride or vanity, money, myself or well-being — the many idols we have.”

PREVIOUS: Praying Lent: Tuesday of the Third Week of Lent

NEXT: In Isaiah, words for those who long for God