Everyone is equal, archbishop tells disabilities community at Mass 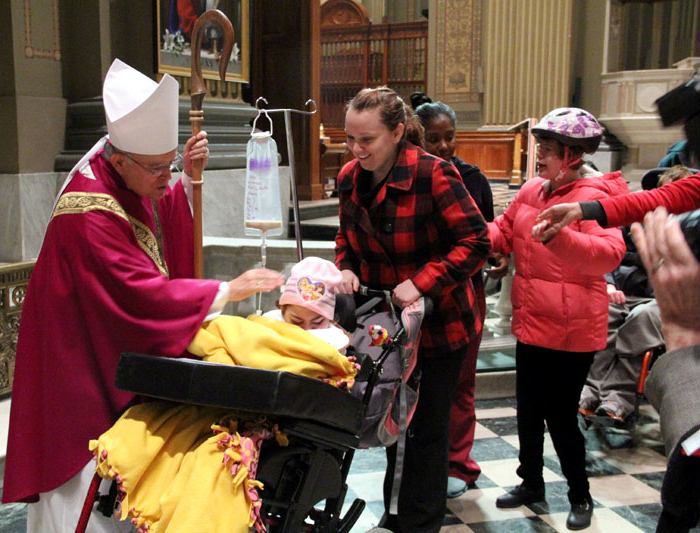 Archbishop Charles Chaput offers a blessing as he greets the employees and residents of St. Edmond's Home for Children, Rosemont, during the Mass for persons with disabilities March 21 at the Cathedral Basilica of SS. Peter and Paul, Philadelphia. (Sarah Webb)

The 23rd annual Mass for Persons with Disabilities and the Deaf Community, held this year as always at the Cathedral Basilica of SS. Peter and Paul with Archbishop Charles Chaput as the main celebrant, takes the cooperation of many people.

This year, in addition to family, caregivers and friends of the guests, there were volunteers from the community: St. Albert the Great Parish, Huntingdon Valley; Roman Catholic High School and others. Also, music was provided by the St. Kevin, Springfield, Adult Choir and the Catholic Community Choir.

“I think this is a very important event,” said Father Dennis Weber, a Servant of Charity priest who is director of mission identity and integration for the Developmental Division of archdiocesan Catholic Social Services. “It brings about awareness and understanding of persons with disabilities as well as their need to be included with the Church and with the community.”

Three men from the disabilities community at Don Guanella, resplendent in traditional altar server garb of red cassock and white surplice, were clearly pleased to be there.

“I like it, I like to pray,” declared Jack. Similarly, John said, “I love it, having to serve Mass.” Michael, who has been coming for years, said “I’m enjoying myself.”

Archbishop Chaput’s homily at the Mass was understandably short, but extremely powerful. Addressing the reason for the Mass, he said,

“Every human being regardless of our abilities is equal to other human beings. So disabilities, things we are focusing on today, are not at all characteristics that make human beings different from one another.”

Speaking of his own self-perceived disabilities, he spoke of his need for eyeglasses, and also not always controlling his anger.

He spoke of the uniqueness of the teaching of Jesus that disabilities do not stand in the way of being equal because God loves us all equally. The main thrust of his words were addressed to the parents and the brothers and sisters of persons with disabilities.

“If you have a child with disabilities it takes a lot of work and a lot of commitment and a lot of love that might not be so required in other kinds of families,” the archbishop said.

Some of the people with disabilities do not live with their birth families but are cared for in facilities conducted by the Archdiocese of Philadelphia or other such places whose staff often became their primary family.

Attendees for the annual Mass came from Don Guanella Village and Group Homes, Divine Providence Village, Life Sharing through Family Living, St. Edmond’s Home (all archdiocesan programs), Allegheny Valley School, representatives from the Catholic League for Persons with Disabilities and the Deaf Apostolate, and individuals and families with members who have disabilities.

“We brought 18 ladies and four men. I think they look forward to this,” St. Joseph Sister Mary Veasy of Divine Providence Village said.

Mary, one of the ladies, said, “I like coming here once a year. I like the Mass and this is my favorite place.”

Mary Jo, another of the ladies, was slightly more qualified in her thought. “I love being here; my cousin’s wedding was here,” she said. “It’s very nice but I like our chapel better.”

Most of the young volunteers from Roman Catholic High School were utilized by assisting those in wheel chairs. “It’s really a way to give back and it’s good for the people to get out,” said Joseph Grand, a Roman junior.

The annual Mass is a ministry of the archdiocesan Office for Persons with Disabilities and the Deaf Apostolate, headed by Immaculate Heart of Mary Sister Kathleen Schipani.

“The celebration is such a beautiful representation of the Church,” she said. “Persons with disabilities, their families and caregivers who attend are a continual sign to us all of God’s unconditional love and generosity. It has been my honor over the last 21 years to coordinate this Mass and reception with the assistance of many.”

The Mass was followed by a reception at the adjoining Archdiocesan Pastoral Center served by volunteers and with all of the food donated by vendors throughout the area.