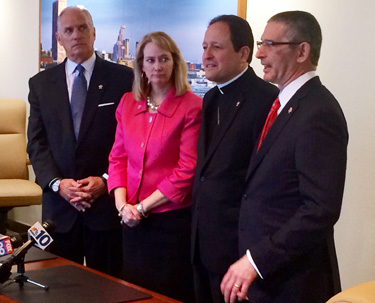 Organizing for the World Meeting of Families and the visit by Pope Francis to Philadelphia in September took a major step forward with the announcement today, March 11, of the 15 committees and leadership charged with spearheading operations in hospitality, liturgy, volunteers and more.

Executives for the events including Auxiliary Bishop John McIntyre and Independence Blue Cross CEO Daniel Hilferty, who is a co-chairman of the World Meeting of Families-Philadelphia, unveiled the committees and introduced their chairpersons at the IBX headquarters in center city.

The congress has already registered approximately 7,500 attendees, according to officials. Between 10,000 and 15,000 people from the United States and 150 countries are expected to register for the Sept. 22-25 congress. Up to 2 million people are also anticipated for the papal events, including a cultural celebration and Mass celebrated by the pope, Sept. 26-27.

To manage such big crowds, planners intend the committees to begin working on multiple issues at this point six months ahead of the September events.

The World Meeting of Families, held every three years, will come to the United States for the first time since it was begun by Pope St. John Paul II in 1994. The aim of the congress is to strengthen the bonds of family life and highlight its value to society throughout the world.

Some committees address obvious needs of accommodating and moving large numbers of visitors to the city, such as the Welcome Committee, the Government Outreach Committee and the Visa and Immigration Committee.

Others, however, point to the unique nature of the families’ congress such as the Hunger and Homelessness Committee, the Parish and School Preparation Committee and the Youth Congress Committee.

In addition to discussions and activities about families at the congress, attendees will also want to see the sights of the Philadelphia region, details of which will be handled by the “GO PHILADELPHIA!” committee. It will highlight the special programs to be provided for the congress and papal visit by the numerous cultural, historical and family-friendly organizations in the region.

The Papal Events Committee is an obvious need, as is the Volunteer Committee. Many volunteers have already contacted the World Meeting of Families organization, whose officials expect to need about 10,000 helpers to meet the events’ many needs.

Since each volunteer must be vetted for security and assigned to tasks that match the person’s skill set, an online registration system will be set up in the spring at the World Meeting of Families website, which continues to accept registrations for the congress.

At least two committees not included in the announcement but alluded to in a statement from the Archdiocese of Philadelphia involve two of the biggest concerns: moving people around and making sure all those people, and especially Pope Francis, are safe.

Transportation will be coordinated by regional authorities including SEPTA, Amtrak, NJ Transit, PATCO and Philadelphia International Airport. Security concerns will be managed by a large and diverse group of governmental agencies including at least the Philadelphia and Pennsylvania State Police departments, state and federal agencies such as the Secret Service, plus security details from Italy and the Vatican.

Archbishop Charles Chaput said in the statement that he was grateful to the people serving on the committees. “I’m confident that we will create a beautiful and memorable week for our families here in the Philadelphia region — and for families from around the world,” he said.

The archbishop praised “the willingness of business, civic and cultural leaders to become engaged. Whether Catholic or of another faith tradition, they have responded equally with open hearts, great enthusiasm and strong commitment,” he said.

The committees and their leadership include:

A key leader of the Philadelphia congress, executive director Donna Crilley Farrell, called the meeting and papal visit a “once-in-a-generation event” and thanked the committee leaders giving their time and talent.

“It is encouraging to see our community come together to deliver such an important event for our city, our state and our nation,” she said. “Truly, we are indebted to those who have agreed to lead committees for the World Meeting of Families and to all who will serve on these committees moving forward. It is their efforts which will make this event so incredibly special.”