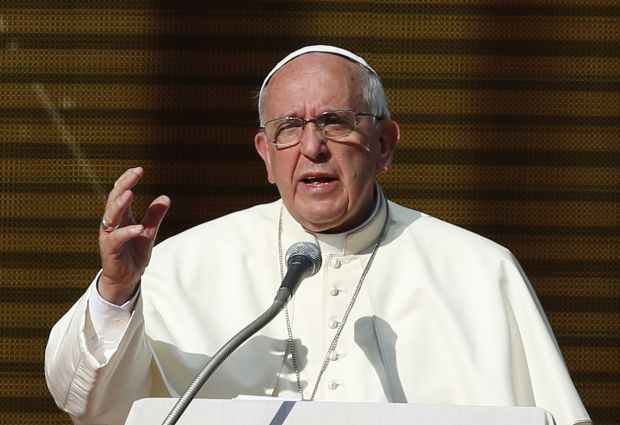 VATICAN CITY (CNS) — To avoid living like pagans, Christians must guard against the temptation of “slipping toward worldliness and power” and of seeking Jesus only to fulfill their material interests, said Pope Francis.

“This is the daily temptation for Christians, for all of us who make up the church,” the pope said at his morning Mass April 20 in the Domus Sanctae Marthae.

After the miracle of the multiplication of the loaves and fishes, the people in the day’s Gospel account (Jn 6:22-29) seek Jesus not “because of the religious awe that leads one to worship God,” the pope said, but “for their material interests.”

When one tries to profit from following Jesus — an attitude frequently shown in the Gospels — then one “risks not understanding” and even obscuring the “true mission of Jesus,” said the pope.

“Many people follow Jesus for their own interests,” the pope said. “Even among his apostles: the sons of Zebedee, who wanted to be prime minister and finance minister, sought power.”

“That fervor to bring Good News to the poor, to proclaim release to the captives, recovery of sight to the blind, freedom to the oppressed and to proclaim a year of favor, becomes obscured,” he said. “It is lost and it is transformed into something of power.”

The pope said the temptation to exchange religious awe, “which Jesus grants in his encounter with us,” for profit-seeking has always existed.

Such was the nature of the three temptations of Jesus in the desert, said the pope: the temptation of food or material goods, spectacle or power, and apostasy or “the adoration of idols.”

The pope also warned that “religious comfort” leads to worldliness, and when this comfort grows, it becomes “that attitude that Jesus calls hypocrisy.”

The result is that “we become Christians in name, in exterior attitudes, but the heart is invested in interests,” the pope said. The consequence of such attitudes is that the faith, the mission and the church “are weakened,” he said.

However, God “wakes up” Christians with the witness of the saints and the martyrs, “who daily proclaim to us that the path of Jesus to follow is that of his mission: to proclaim the year of favor,” he said.

To those in the Gospel account who ask what they can do “to accomplish the works of God,” the pope continued, Jesus tells them “to believe in the one he sent, that is to have faith in him, only in him, to trust in him and not in other things that will lead us far from him in the end.”

The pope concluded with a prayer that God grant Christians the grace of awe and help them not fall into the spirit of worldliness, which “beneath a varnish of Christianity will lead us to live like pagans.”

PREVIOUS: Don’t seek humiliation, but when it comes react like Jesus, pope says

NEXT: Teaching and preaching on same-sex marriage