For Easter, make Jesus’ passion your own, pope says 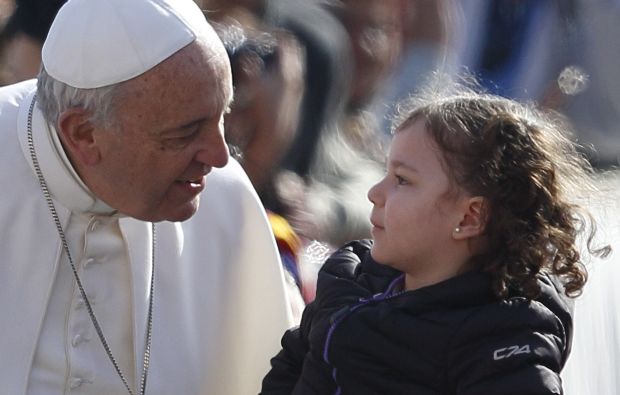 Pope Francis greets a child as he arrives for his general audience in St. Peter's Square at the Vatican April 1. (CNS photo/Paul Haring)

VATICAN CITY (CNS) — For a “good Easter,” Christians must do more than simply recall the passion of Jesus during Holy Week; they must “enter into the mystery” of the Easter Triduum and make Jesus’ feelings and attitudes their own, Pope Francis said.

During his general audience April 1, he also recalled the “true martyrs” of today, men and women who “offer their lives with Jesus” for their Christian faith. Their witness, in imitation of Christ’s sacrifice, “reflects a ray of this perfect, full and pure love (of Christ),” he said. Theirs, he added, “is a service of Christian witness to the point of bloodshed. It is the service Christ did for us, he redeemed us.”

The pope began his catechesis, dedicated to the celebration of Holy Week and Easter, by saying that the death and resurrection of Christ are “the culmination” of the entire liturgical year and of the Christian life.

The pope offered reflections for each day of the Triduum, beginning with Holy Thursday. With the “prophetic gesture” of washing the apostles’ feet, Jesus expressed “the meaning of his life and passion — service to God and brother,” the pope said.

At baptism, “the grace of God washed us of our sin and we took on Christ,” he said. Every time Catholics receive the Eucharist, “they are united with the Servant Christ in obedience to his commandment to love as he loved,” he said.

“If we receive holy Communion without being open sincerely to washing each other’s feet, we do not recognize the body of the Lord,” he said.

The second day of the Triduum, Good Friday, recalls how Jesus “transformed the greatest iniquity into the greatest love” with his sacrifice on the cross, the pope said.

Following Christ, many Christian men and women today are giving their lives as martyrs, the pope said. He gave the example of the “heroic testimony” of Father Andrea Santoro, an Italian priest who was killed in 2006 while working as a missionary in Turkey.

“This example of a man of our times, and many others, strengthens us in offering our lives as gifts of love to our brothers in imitation of Jesus,” he said.

The pope also spoke about the significance of Jesus’ last words on the cross: “It is finished.”

“They mean that the work of salvation is accomplished, that all of the Scriptures find their complete fulfillment in the love of Christ,” he said.

“How beautiful it would be if all of us, at the end of our lives, with our mistakes, our sins, even with our good works and our love for our neighbor, can say to the Father as Jesus did, ‘It is finished.’ Not with the perfection (of Jesus) but saying, ‘Lord, I did everything that I could. It is finished,'” the pope said, speaking off the cuff.

On Holy Saturday, the church identifies with Mary and contemplates Christ in the tomb, after the “victorious battle of the cross,” the pope continued.

“In the darkness that envelopes creation, she remains alone to keep the flame of faith lit, hoping against all hope in the resurrection of Jesus,” he said.

“Sometimes, the darkness of night can penetrate the soul and we think, ‘there is nothing left to do,’ and the heart no longer finds the strength to love,” the pope said, speaking about life’s discouragements. “But it is in this very darkness that Christ lights the fire of the love of God.”

The pope said the great mystery of Easter is that “the stone of pain is rolled back, leaving room for hope.”

“As Christians, we are called to be sentinels of the morning, who know how to see the signs of the Risen one,” like the disciples at the tomb on Easter morning, he said.

PREVIOUS: How mercy renews and welcomes us into a warm church

NEXT: Is general absolution OK to give Father a break?