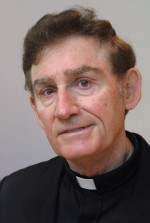 On a recent trip out West, I once again became aware of one of St. John XXIII’s reasons for initiating the Second Vatican Council: to encourage the church to adjust to changing times.

It’s no exaggeration to say that much of today’s life is shifting dramatically and calling for drastic changes. When I was in California, residents there were talking about passing laws and taking other measures to preserve water, since the state finds itself going through a historic drought.

After my visit to California, I traveled to Portland, Oregon. At the airport, I rode its light rail into the city, and while in the city, I noticed its vast transformation over the decades.

In both experiences, the common denominators seemed to be conservation, sacrifice and austerity.

In the case of water consumption in California, the public was asked to cut down on watering their lawns, among other measures. Hotels and institutions were asked to curtail excessive use of water, and recycling water was highly encouraged everywhere. Because of the drought, a plant to remove salt from ocean water is under construction near San Diego.

In Portland, people had to endure streets being torn up and trains invading their neighborhoods in order to have fewer cars on the road to reduce pollution. They also had to endure losing some of the city’s antiquity because of the rail.

In both cases, there was resistance. Some people in California complained about the farmers’ use of water. They were told farmers need water so they can produce food that people can eat.

In Portland, there was resistance from wealthy homeowners who didn’t want a streetcar from Lake Oswego to Portland going through their neighborhood. Even in Washington, D.C., where streetcars are being reintroduced to the city, some people complain that the wires overhead destroy the look of the neighborhood.

It is no exaggeration to say that any politician running on a platform of conservation, sacrifice and austerity would have little chance of winning. And yet if droughts continue, if air pollution increases, if global warming continues and the fish in our oceans become scarce or disappear, Mother Nature just might create its own age of austerity.

During Lent, we were reminded to do with less in order to better appreciate God’s blessings. Austerity is one of life’s golden rules!

We can appreciate this lesson beyond Lent. Perhaps austerity can be used as a means to effectively cope with change, to create a brighter future, if we practice it throughout life and learn to take better care of our resources.

PREVIOUS: A code of civility for the Internet

NEXT: When commenting on service, honesty need not be brutal