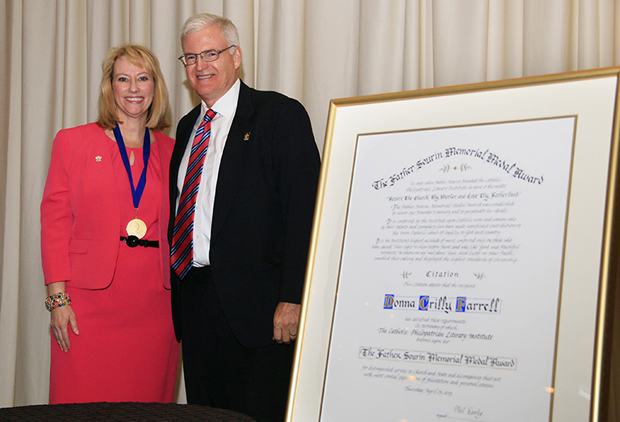 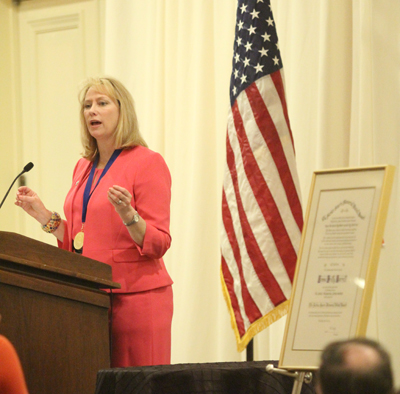 Donna Crilley Farrell speaks at the Catholic Philopatrian Literary Institute April 23, during which she received the distinguished Sourin Award. (Photo by Sarah Webb)

Donna Crilley Farrell, who is the executive director for the upcoming World Meeting of Families in Philadelphia, joined a select group on April 23. She was presented with the annual Sourin Award by the Catholic Philopatrian Literary Institute during the Philos’ annual dinner, held this year at the Four Seasons Hotel in Center City.

As Philo President Philip R. Earley commented, past recipients of the award, which was initiated in 1960, include “governors, senators, mayors, college presidents, businessmen, lawyers, writers, bishops and cardinals (five of the latter to be exact) both locally known and internationally known.”

Farrell, who is a member of St. Kevin Parish in Springfield, is a graduate of Cardinal O’Hara High School and the University of Pennsylvania. After working several years in local media she joined the communications staff of the Philadelphia Archdiocese and was director of communications for the archdiocese from 2005 to 2012.

More recently she was manager of external affairs at Independence Blue Cross before coming back to the archdiocese at the beginning of 2014 to take charge of what could be the city’s most spectacular Catholic event ever, possibly even surpassing the visit by Pope John Paul II in 1979.

“In five months this city, this Catholic community, will host the world and Pope Francis,” she said in her acceptance remarks. “The scope is monumental and the impact is highly significant.”

She estimates people will be coming from at least 150 countries, including a large contingent from Vietnam, and also 7,000 to 8,000 national and international journalists. 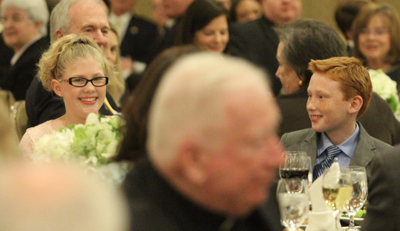 Farrell, whose own immediate family includes her husband Michael T. Farrell and two children, 11-year-old twins Connor and Christina, noted the theme for the World Meeting of Families is “Love Is Our Mission: The Family Fully Alive.”

“We will have that opportunity of the visit of Pope Francis as an opportunity to accept that mission to love fully alive,” she said, conceding that daily family life it is not always easy.

Jesuit Father Edward Sourin, who founded the Philo in 1850, “realized that love has to be central in our lives,” she said. “He dedicated his life and this great institution to helping the new immigrants at a time when their families were alienated within their new home in America.”

In point of fact, the word Philopatrian is a created word from the Greek and Latin meaning “love of country,” and was especially relevant in 1850 when Philadelphia was just recovering from the sectarian riots of the 1840s.

There was a lingering but unfounded suspicion among Protestants that the mostly immigrant Catholics really did not accept the democratic principles and the idea of pluralism that the country was founded upon. Understanding the discrimination that young immigrant Catholics experienced, Father Sourin established the Philo as a place where they could receive the educational skills needed for material advancement.

Although most members of the Philo today are generations away from their poor immigrant roots, as an institution it keeps Father Sourin’s vision alive through its annual college scholarship program.

For more information on the American Catholic Philopatrian Institute visit the website thephilo.org. 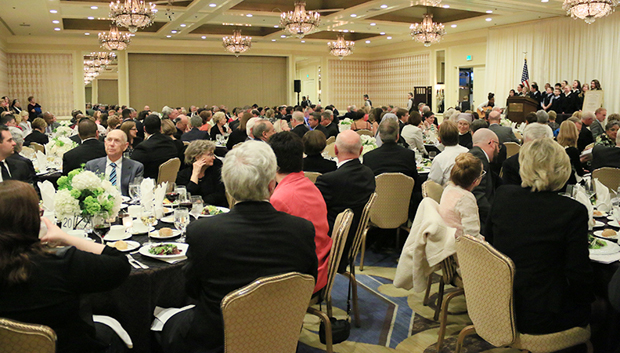 Sixth graders from St. Cecilia School in Philadelphia sing a song for the assembled guests at the Philos’ banquet April 24 at the Four Seasons Hotel in Philadelphia. (Sarah Webb)