A paralyzed church is ill and needs the Spirit for courage, pope says 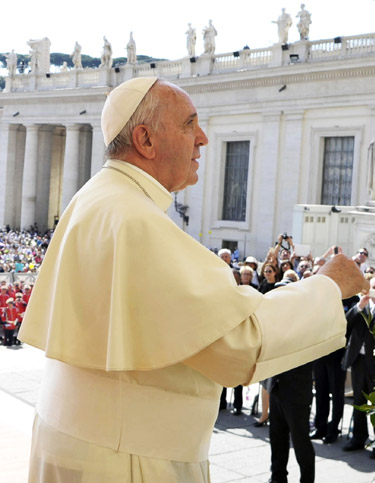 Christians are courageous and full of joy because they know Christ is victorious, he is near and he loves them forever, the pope said in his homily May 15.

During his morning Mass in the chapel of the Domus Sanctae Marthae, the pope said, “Fear is not a Christian attitude. It is the attitude, we can say, of a soul behind bars, without freedom, that isn’t free to look ahead, to create something, to do good.”

Fear is harmful, he said; “it weakens us, diminishes us, paralyzes us, too,” because the person chooses to do nothing rather than risk making a mistake or else has no idea what to do.

“A scared Christian is a person who has not understood what Jesus’ message is,” he said, according to Vatican Radio.

Parishes and communities, not just individuals, also can be afraid, even though the Lord tells them not to fear, he said.

Such groups tend to prohibit everything; “they always take the safe way: ‘No, no we don’t do this,’ ‘no, this can’t be done,'” he said. “It seems they wrote ‘Forbidden’ on the front door; everything is forbidden out of fear.”

Fear in communities makes the atmosphere “foul because it is an ill community,” he said.

The fear that leads to selfishness or avoidance is not the same as having a healthy fear of God, which is a virtue, the pope said, and an expression of awe, reverence and respect.

“Fear of God does not diminish, does not weaken, does not paralyze; it drives forward” toward God’s will and the mission he gives people, he said.

The day’s Gospel reading, John 16:20-23, shows the concept of Christian joy, which Jesus said is a joy that no one can take away, even in moments of suffering, pain and difficulty, the pope added.

“A Christian who constantly lives in sadness is not a Christian. A Christian who, in times of trial, sickness, many difficulties, loses (a sense of) peace, is missing something,” he said.

But this joy is not “simple amusement,” it isn’t something superficial or fleeting, he said.

Joy, like courage, is also a gift from the Holy Spirit.

NEXT: The power of a loving touch