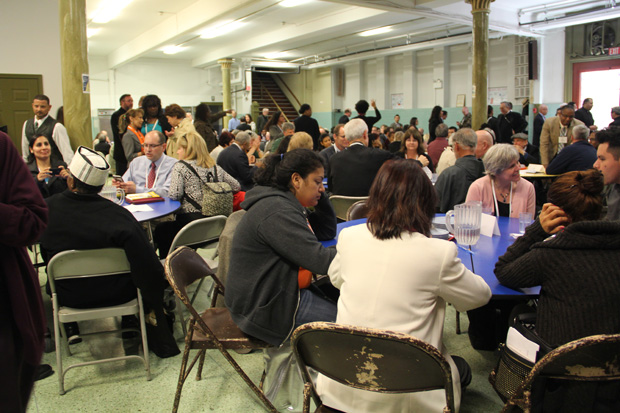 Participants at the start of a two-day conference by the mostly Catholic PICO community organizing network meet for discussions in the parish hall at Our Lady of Hope Church April 30 in North Philadelphia. (Photo by Margaret Ernst) 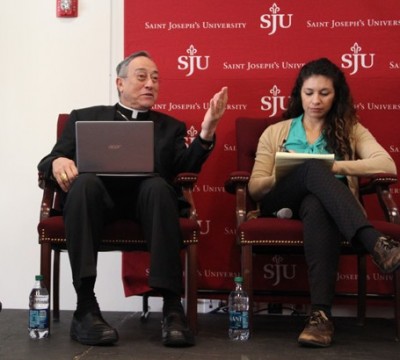 Honduran Cardinal Oscar Rodriguez Maradiaga gestures while speaking on a Q&A panel April 30 at St. Joseph’s University, Philadelphia. The discussion led the two-day PICO conference on “Confronting the Economy of Exclusion,” about which the cardinal spoke. (Margaret Ernst)

Before and after Pope Francis’ visit to Philadelphia this September, his message of greater solidarity with poor people is resonating with Catholics and other people of faith organized for just that purpose.

Almost 300 representatives of parishes and organizations from 50 dioceses across the United States that are aligned with the faith-based advocacy group PICO (People Improving Communities through Organizing), gathered for a two-day conference last week in Philadelphia to launch a year-long effort of faith formation and social action on the issue of poverty.

Conference organizers cited the pope’s pastoral letter “The Joy of the Gospel” and its searing critique of social and economic injustices as motivation for the initiative, as much as his coming visit to America.

Included in events for the April 30-May 1 conference at St. Joseph’s University in Philadelphia were 56 clergy, religious sisters and lay leaders from 16 parishes in the Philadelphia Archdiocese.

Honduran Cardinal Oscar Rodriguez Maradiaga, a close adviser to Pope Francis and chair of his nine-member Council of Cardinals studying reforms for the Vatican’s central administration, led the first day with a question-and-answer session in the morning. Bishop Stephen Blaire of the Diocese of Stockton, California, also attended.

Many in the packed conference room raised cheers to Cardinal Rodriguez’s provocative comments on the theme, “Year of Encounter: Confronting the Economy of Exclusion.”

“The poor person is the victim of entrepreneurs (who give) work but without paying a minimum wage. They are thieves!” Cardinal Rodriguez said. 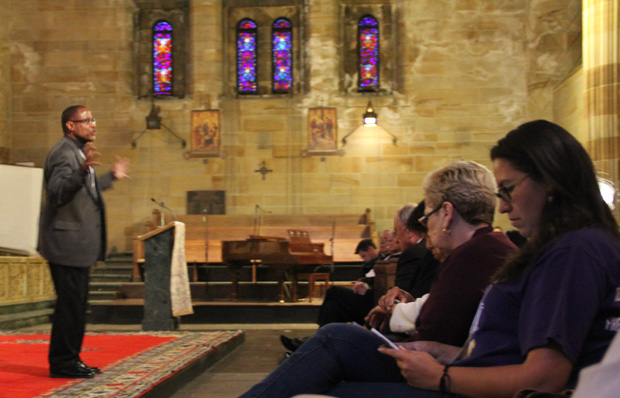 Father Bryan N. Massingale, a moral theologian at Marquette University, speaks about racial relations to participants of the PICO conference and residents of the North Philadelphia community April 30 at Our Lady of Hope Church, Philadelphia. (Margaret Ernst)

The economy, he explained, “is a system that is ill from the inside and needs healing” because it “is centered in money and markets, not the human person.”

Poverty, from an economic perspective, “is only numbers, a national budget,” he said. “But for people of faith, poverty is in the faces of people. We need that (perspective). Catholics can see and touch poverty.”

If a person says “I never saw a poor man,” the cardinal said he would reply, “You never went to where they are. They are not only numbers.”

He identified the problem of economic inequality as stemming from the root of the biblical question that Cain, after murdering his brother Abel, put to God, which Cardinal Rodriguez called “the terrible syndrome of Cain.”

The failure to recognize another person as a child of God equal in rights and to whom respect is due, and focusing only on oneself, leads to injustice, Cardinal Rodriguez suggested.

And where there is no justice, there is no peace, he said, pointing to the eruptions of violence in the United States over the killings of poor black men by police in the past year, most recently in Baltimore.

“Justice is the basis for peace. Unrest is a cry of those who are not being listened to,” he said. “We don’t justify violence, there are limits (to public expression). But when people are desperate, they can cross those limits.”

Only when people recognize the equality of one another, “that we have the same rights, we will have respect for each other and love each other,” he said.

While Cardinal Rodriguez might have been “preaching to the choir” of social justice advocates in the room, he also challenged them to get to know poor people, some of whom may even live within the same communities.

“Very few Catholics go to church every Sunday,” he said. “But even those who do, you cannot reduce the practice of your faith by going to Mass. You must go out of yourself and take care of another (person) every day.

“People think that by praying (only) they are fulfilling their duties,” he continued. “How many poor people are you helping (in your parish)? How many poor in your neighborhood?”

He identified the “globalization of indifference,” a term coined by Pope Francis in his pastoral letter, as one key factor to the persistence of poverty, and one other: the bedrock American trait of rugged individualism gone awry.

“Many times we don’t know the reality because of individualism … egoism, thinking only about you. You want (the poor) to go away,” he said. “Take care of your neighbors – this is the Gospel,” he advised. “We cannot live in the Cain syndrome.”

“If you see with the eyes of the heart, you will have compassion,” he said. “That is more than pity. Compassion is to ‘feel with.’ We need compassion.”

In the Year of Mercy that Pope Francis has called for beginning in Advent later this year, the cardinal urged his listeners to “take your heart to suffering people. How the Year of Mercy will be bearing fruit is to convert to the suffering of concrete people.”

He recalled Jesus’ telling of the parable of the Good Samaritan (Luke 10:25-37). On the side of a highway was a beaten, robbed and suffering man. Coming the other way was a prosperous trader, who not only cleaned the man’s wounds and applied bandages, but also took the man to an inn and told the innkeeper he would pay him back later upon returning.

“Who is doing that today?” the cardinal wondered. “‘Pay me first,’ people would say.

“Life is made by this two-way highway. The Gospel is for now, it is powerful. We need to be converted.”

He encouraged the mostly Catholic and Christian participants to work to convince politicians not to seek their own self-interest but the greater common good for society.

“Be united in forming communities of faith and take concrete actions,” he told the attendees. “We are community. You as organic communities are working for the common good. Do not be tired. Never become discouraged.”

The lead organizer of the conference, PICO New Jersey’s Executive Director Joseph Fleming, said the year-long faith formation project centered around Pope Francis’ visit to Philadelphia was developed because “Catholic parishioners are hungering to connect peace and justice.” He added Catholics make up a third of the organization’s 1.2 million members from various faiths.

PICO’s mission, he said, is to “improve conditions for working families and strengthen the structural dimension of charity and justice.”

After the session at St. Joseph’s University, most participants boarded buses and visited Our Lady of Hope Parish in North Philadelphia to engage in a dialogue with social justice leaders and poor residents of the disadvantaged area. 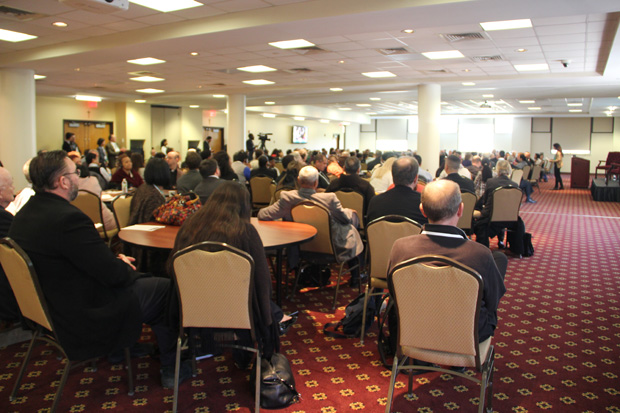 Approximately 300 participants at the conference, including scores of clergy, religious and lay persons from parishes of the Philadelphia Archdiocese, meet April 30 at St. Josephs University. (Margaret Ernst)