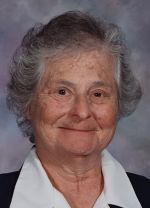 Sister Carol Ann Zurlo, O.S.F., 78, (formerly Sister Emma Francis) died April 25 in Assisi House, Aston. She had been a professed member of the Sisters of St. Francis of Philadelphia for 54 years.

Born in Trenton, N.J., and graduated from Upper Freehold Township High School, Sister Carol Ann studied nursing and became a registered nurse at St. Francis Hospital School of Nursing in Trenton prior to entering the congregation in 1959. She professed her first vows in 1961. Her cousin, Sister Patricia Millen, is also a member of the congregation.

She ministered in the Archdiocese of Philadelphia for 22 years. She worked at St. Agnes Medical Center and later served as director of St. Mary’s Children’s Health Center in Langhorne. In 2008 she moved to Assisi House in Aston where she served in prayer ministry until her death.

Sister Carol Ann’s 21 years in the Diocese of Trenton included working at St. Francis Medical Center in Trenton, ministering at Morris Hall in Lawrenceville, and serving as school nurse at All Saints School in Burlington. She also served on the provincial council for the former St. Anthony Province which was based in Trenton.

Sister Carol Ann also ministered at St. Joseph Hospital in Lancaster, Pa., for six years. She spent another six years at Good Shepherd Home Health in Hayesville, North Carolina. Her final ministry prior to her retirement and moving into prayer ministry was to serve as administrator of St. Francis Convent in Ringwood, N.J.

The funeral Mass was celebrated April 29 at Assisi House. Burial was in Our Lady of Angels Cemetery in Aston.

In addition to Sister Patricia Millen, Sister Carol Ann is survived by her sister, Precious Groom, two brothers, John and Don Zurlo, nephews, and by her Franciscan family.

PREVIOUS: Franciscan sister, a native of Ireland, dies at 81