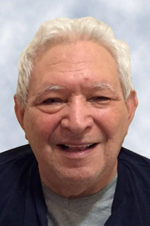 Deacon Jose A. Morales, 83, a member of the first ordination class of permanent deacons when the ministry was introduced to the Archdiocese of Philadelphia in 1981, died May 5. Most of his ministry was at St. Mark Parish, Bristol.

Deacon Morales was born in Yabucca, Puerto Rico, in 1931, the son of the late Gabriel and Ruperta Rodrigues Morales and relocated to the Philadelphia area in 1952.

He is survived by his wife of 60 years, Gloria Montero Morales, and eight children. He was a retired press operator for Art Kraft Container Co.

Father James Catagnus, who early in his ministry was stationed at St. Mark’s, remembers Deacon Morales as a committed lay worker along with his wife, in charge of the Spanish youth group, but not yet a deacon. Their paths crossed again when Father Catagnus was pastor of the former St. Edward Parish in Philadelphia.

“He was a great Dad, very faithful to the church and loving, strong as an ox,” said his youngest daughter, Debbie Mojica. “He provided for Mom and us kids. When he was younger he loved to dance, and he still loved to play dominos.”

After his ordination on Oct. 31, 1981 by Cardinal John Krol at the Cathedral Basilica of SS. Peter and Paul Deacon Morales ministered at his home parish, St. Mark. In 1983 he received a secondary ministry assignment to the Shriners Hospital for Children Philadelphia.

In 2000 he relocated to the Archdiocese of St. Petersburg, Florida, where he continued in extern ministry until his retirement in 2013 and return to Philadelphia.

“He was an outstanding man, very well known in Bristol,” said Father Dennis Mooney, the pastor of St. Mark’s. “I knew him from years ago in St. Edward’s Parish. Here he did all of the ministries deacons do: baptizing, teaching, preaching. His deacon class were real pioneers; they were handpicked by Msgr. (G. Francis) Craven.”

The Reception of the Body and viewing for Deacon Morales was held at St. Mark Church, Bristol, on Monday, May 11 at 9:30 a.m. followed by his funeral Mass at 11. Father Mooney was the principal celebrant and homilist; the Deacon of the Mass was Deacon Adolfo Crespo.

In addition to his wife and daughter Debbie, Deacon Morales is survived by his children, daughters Gloria Morales Evans, Melissa Medina and Ivonne Rivera and sons Jose, Hector, Jorge and Michael; 19 grandchildren and three great-grandchildren. Interment was at St. Mark Cemetery.