Rebel and skeptic in college becomes a priest 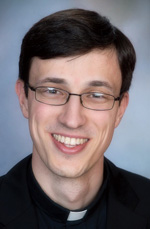 Raised a Catholic by his mother, Alex Gibbs renounced his faith and stopped going to church at Temple University.

“So that was my, you know, grand rebellion,” said now Father Alex Gibbs, who was ordained a priest for the Philadelphia Archdiocese May 16.

At Temple he took a general education course. The professor was a St. Augustine scholar, and one day in class he discussed the difference between right and wrong with his class. Gibbs smugly dismissed any separation between the two.

The professor challenged Gibbs, and the argument became heated. The teacher’s rebuke caused a change in Gibbs.

“It was a jolt from his complacency,” said Father Shaun Mahoney, then and now head of the Newman Center at Temple, who later got to know the young Gibbs. “As he awakened, it was obvious he had a real intellectual thirst for the faith.”

By the end of his first year at Temple, Father Gibbs said he had “a real moment of grace, a moment of conversion” while reading St. Augustine’s “Confessions.” He received the gift of faith and returned to the church.

He started participating in Mass and the sacrament of reconciliation at the Temple Newman Center.

“Eventually I figured you’re supposed to pray, like, daily, so I said an Our Father every day,” he said.

Slowly, he communicated more with God as time went on. In the middle of sophomore year, he began thinking about his vocation. He initially thought about being a monk and attended a retreat during college in New York with friends, including Jozef Jozefowski.

Jozefowski said people knew Gibbs for initiating and keeping contact. He still communicates with friends from college. Jozefowski met Gibbs on Temple’s campus and the two struck up a conversation and remained friends since. Jozefowski described his friend as outgoing and adventurous.

While a Temple student, Gibbs attended an overnight retreat at St. Charles Borromeo Seminary and thought about the priesthood from then forward. Part of the retreat was witnessing an ordination firsthand, and for Gibbs it was very influential. By the end of his time at Temple, he liked different religious orders but didn’t feel called to them.

Around this time, he saw Pope Benedict XVI celebrate Mass at Yankee Stadium during his visit to New York City in 2008.

The pope told young people to pursue vocations to the priesthood and religious life.

“And I was waiting for him to say ‘and married life,’” Father Gibbs said. “That’s what I’m called to obviously.”

Benedict quoted Jesus in John 15:13, “No one has greater love than this, to lay down one’s life for one’s friends.”

That hit home for Gibbs during his junior year at Temple, where he felt a good sense of community at the Newman Center.

“This would be a good way to lay down my life for these people,” he remembers thinking. “So I guess I’m not called to married life.”

That propelled Gibbs to apply to the seminary. He entered but had some doubts along the way.

“In a lot of ways, I think the seminary can be a difficult time because for myself, I really committed myself to following the Lord, and then it’s just this long stretch,” Father Gibbs said. “It’s kind of like being in the desert for a while, I would say.”

Now he is certain of his vocation.

Father Gibbs wants to be a spiritual presence for people, to change lives, and he looks to the sacrament of reconciliation as a moment for that to happen.

PREVIOUS: Devotion to Mary leads to consecration, and now to priesthood

NEXT: New priest looks to draw Catholics back to church