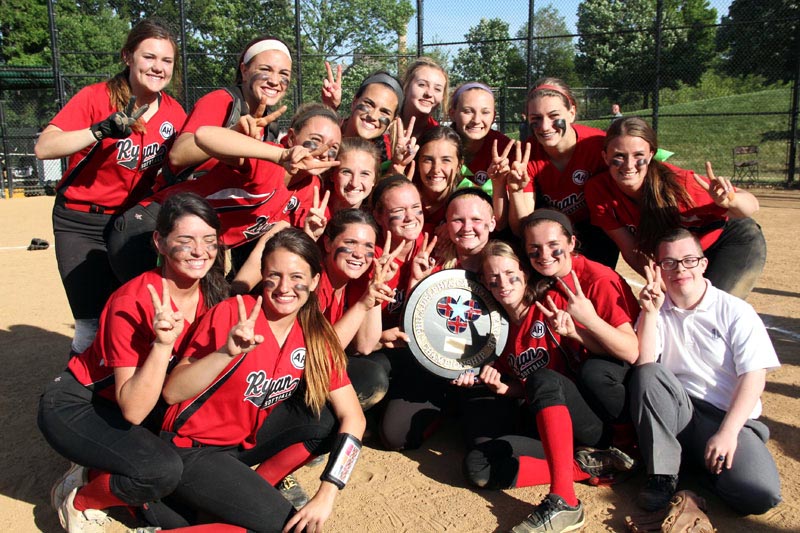 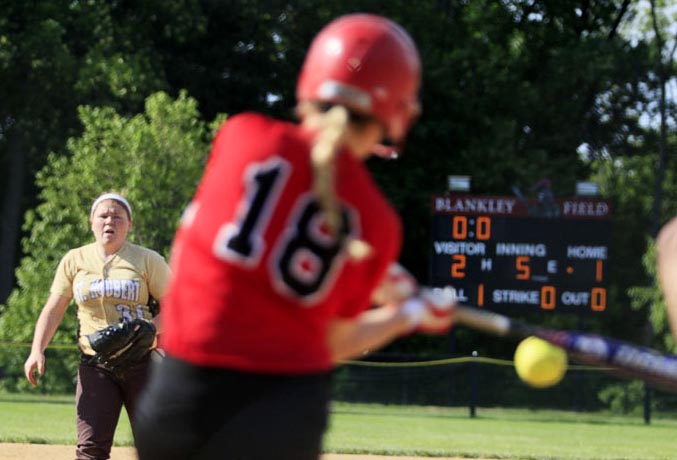 It was the bottom of the sixth, and Archbishop Ryan trailed St. Hubert, 2-1. In normal circumstances, that might not have been the worst thing in the world, but that was the situation in Wednesday afternoon’s Catholic League softball championship at Arcadia University. (See our photo gallery of all the action.)

Hubert junior pitcher Melissa Hess had been stellar, retiring 11 straight Ragdolls, including five by strikeout. If the Ragdolls were going to mount a comeback, time was of the essence.

“We’ve been behind a few times, but not many,” said Ryan first-year coach John Kidwell. “There was obviously a concern, but I don’t think anyone associated with our team was panicking.”

Later saying that she was simply trying to “hit the ball somewhere,” Hoch smacked a towering fly ball to right field. Off the bat, it appeared rather innocuous, but out of nowhere, the ball appeared to hit a wind current and stopped mid-flight, landing about a foot inside the foul line. Running on contact, both runners scored easily.

As Hoch motored to third on an errant throw, Ryan’s bench erupted. A tad winded, Hoch was unable to suppress a beaming smile that indicated a combination of relief, celebration and anticipation. 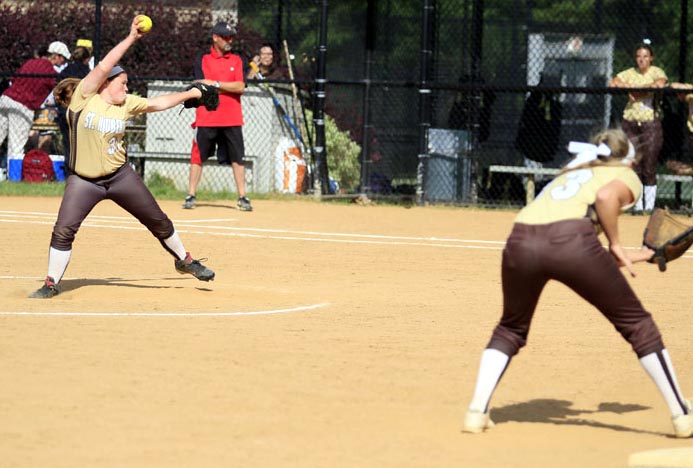 About 15 minutes later, the Ragdolls went on to capture their second straight Catholic League title, a 5-2 victory that extended their winning streak against CL opponents to 30 on the strength of consecutive 15-0 seasons (12 during the regular season; three in the playoffs).

“One of the great things about this team is that everybody tries to do her part and rely on everyone else to do hers,” Hoch said. “I was able to get a hit, but that hit doesn’t mean anything unless the players before me get on base.”

After Hoch’s heroics came consecutive RBI singles by senior Michelle Hooten and freshman Kate Ostaszewski — one of three Ostaszewski sisters to provide an integral impact. The only remaining drama was waiting for Dadalski — the Most Valuable Pitcher of the Catholic League — to execute three more outs.

True to Hubert’s implacable personality, the visiting seventh included an all-out effort, but a one-out single by junior Brittany Kalesse proved harmless, thanks in part to a sensational diving stop and force out by Ryan sophomore shortstop Emily Ostaszewski for the second out.

When Dadalski induced a fly ball that was corralled by junior centerfielder Vicki Black, a marathon triumph celebration — from the field, back to school for a pizza party, etc. — commenced.

“This has been the greatest senior year,” said Dadalski, whose pitching numbers over the past two seasons have been staggering. “It wasn’t one of my best games, but it’s all about working together as a team. We trust each other to have each other’s back.”

A storybook season came dangerously close to unraveling in the fifth inning. Trailing 1-0, Hubert tied the game when junior Julia Vizza led off with a double and scored when Kalesse’s grounder to third turned into a two-base error. 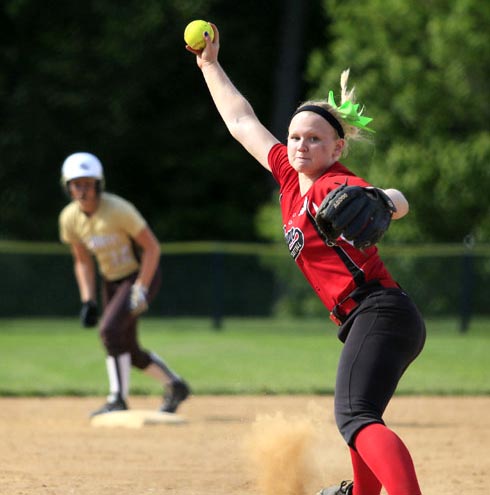 Archbishop Ryan’s Kerri Dadalski winds up for a pitch.

After the game-tying play, sophomore Reilly Kerr, Ryan’s first-team All-Catholic first baseman, injured her right knee and needed to be helped off the field. Kidwell, a 1989 Ryan grad who previously had spent 23 years as an assistant to the late Andy Hafele, who died before last season and was replaced on an interim basis by Kidwell and other assistants, was then forced to make a variety of position changes. One of them necessitated moving Hoch from second to first base, a decision that paid enormous dividends shortly thereafter.

Following a single by Hubert senior star shortstop Jazmin Ortiz that put runners at the corners, senior Nicole Vanderman (a co-captain along with Ortiz) brought home the lead run with a single to left field.

After junior Liz Schule slapped a grounder to third, junior Alexa Marasheski fired to first for the out. On the release, Ortiz took off for home, but a perfect strike from Hoch to junior catcher and Catholic League Most Valuable Player Sarah Ostaszewski (sensational defensive game) nailed Ortiz at the plate.

“She’s a natural shortstop who plays a great second base and this is the first time she played first base for us,” said Kidwell. “She has a gun for an arm, and that throw to home … put it this way, and this isn’t to slight anyone, I don’t think anyone else could have made that throw.”

Although her eventual game-winning hit served as the most prestigious highlight, Hoch said her toss from first to home was most special.

“I live for plays like that, and I think most players do,” said Hoch. “It’s definitely something you think about. I played first base (in tournament ball) and we worked on that play over and over, so for that to come up at that time, it was exciting.”

In contrast to the exuberant Ragdolls snapping pictures at home plate, dousing Kidwell with a huge bucket of ice water, donning “Ryan 2015 PCL Champ” T-shirts that a supremely confident Kidwell had covertly purchased, and basking in the reverie of successfully defending their Catholic League crown despite last year’s graduation of five standout starters, Hubert’s coach Dave Schafer and his assistants joined their despondent but emotionally balanced Bambies for a quiet meeting in right field.

Later, Schafer was unable to hide his heartbreak for his never-say-die players who, against one of the best pitchers in Catholic League history, put runners on base in six of the seven innings and smoked several hard drives that were snared by Ryan’s stingy defense.

“We talk a lot about character,” said Schafer, whose Bambies have competed in seven of the past eight championship games, winning four of them. “We constantly get compliments about how our players go about their business. So when you lose, it’s hard, but we have to keep our head up and remember that we have a lot to be proud of.

“Nobody gave us a chance coming into this year. But practice to practice, game to game, we kept improving. We felt good about our chances. To be in a situation like this, playing for the Catholic League championship, that’s what you hope for. We came close, but we were unable to overcome one bad inning.”

NEXT: ‘Turning two’ makes for one long-sought championship