Failures are par for the course toward salvation, says Pope Francis 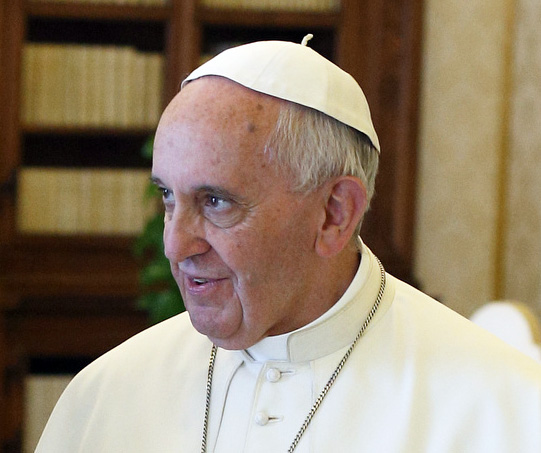 Pope Francis at the Vatican May 29. (CNS photo/Paul Haring)

VATICAN CITY (CNS) — The road to salvation may be pitted with failures, but God uses them and overturns them to manifest his love for his people, said Pope Francis.

Reflecting on the parable of the wicked tenants in the Gospel of Mark during morning Mass at the Domus Sanctae Marthae June 1, the pope said the parable may be understood to represent the “failure of God’s dream.”

In the Gospel passage, Jesus tells of the owner of a vineyard, who has a dream for his land, which he carefully and lovingly prepares to be cultivated. He hires tenants to work the field, but they are wicked and kill all those whom the owner sends to retrieve his portion, including his son. What should have been a story of love, said the pope, instead appears to be a story of failure.

Failures are present throughout salvation history, the pope said. God’s dream for humanity included failure and bloodshed from the very beginning when Abel was killed by his brother Cain; the murders of many prophets followed, and the process culminated with the crucifixion of Jesus, he said.

The Bible includes the “many, many laments of God” when faced with the actions of his people, who are “unable to free themselves from the desire Satan sowed” in Adam and Eve to “become gods” themselves, the pope said.

“The story of salvation could very well be called the story of failure,” he said.

But this “logic of failure” is overturned in the cross, which is perceived as “a scandal,” but is where God makes manifest the ultimate victory of his love for his people, the pope said.

“Here is where love wins,” he said. “The story that begins with a dream of love, but develops as a story of failures, ends in the victory of love: the cross of Jesus.”

In the Gospel, Jesus speaks of “the stone that the builders rejected (that) has become the cornerstone.”

“And the son, the last one sent, who was rejected, judged, not listened to and killed, became the cornerstone,” the pope said. God grants “salvation through the rejection of his son, who saves us all,” he said.

God builds upon failure, the pope said, noting failures make up the journey of every Christian.

“The path toward our salvation is a road that does not lack many failures,” he said.

Christians would do well to humble themselves before God, he said, just as Jesus did “in our name.”

PREVIOUS: Shopping with Jesus, for the least of these

NEXT: Mom and Dad’s uncivil separation hurts adult children too