Mural project gets community involved ahead of pope’s visit 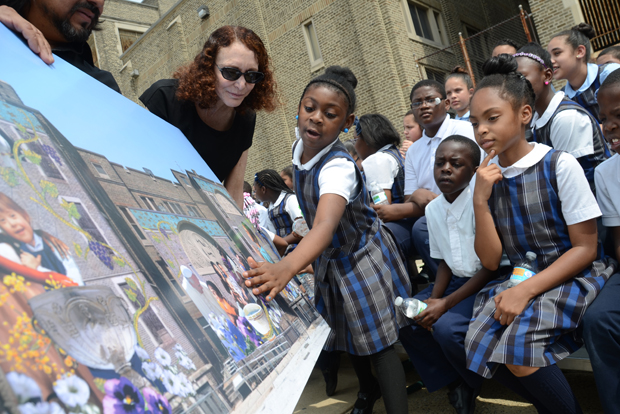 Students of St. Malachy School inspect the design of the mural May 28 that will be installed at their new school building in North Philadelphia. The mural will commemorate the visit of Pope Francis to Philadelphia in September. (Photo by Sabina Pierce) 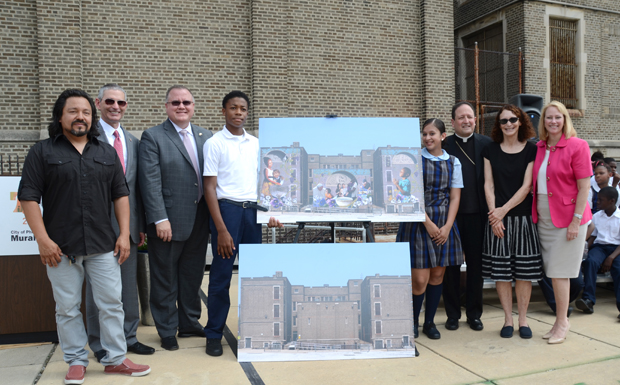 Right now it’s a blank wall on the exterior of what was North Philadelphia’s Harrison Public School and is being completely renovated as the future home of St. Malachy School, one of Philadelphia’s Independence Mission Schools.

Within a few months the wall be transformed by a 4,239-square-foot mural that will commemorate the upcoming World Meeting of Families and the visit to Philadelphia by Pope Francis.

The mural is a collaboration between the World Meeting of Families, the Independence Mission Schools, the City of Philadelphia Mural Arts Program, Wells Fargo as the corporate sponsor, and of course artist Cesar Viveros who designed it.

The design was officially unveiled at a ceremony May 28 at the site attended by various dignitaries and most importantly by students at St. Malachy School and also St. Veronica School, both in North Philadelphia.

“This is a World Meeting of Families project, we just provided the wall,” said Anne McGoldrick, president of the 15-school Independence system. “It is a marriage made in heaven. The mural will be huge.” 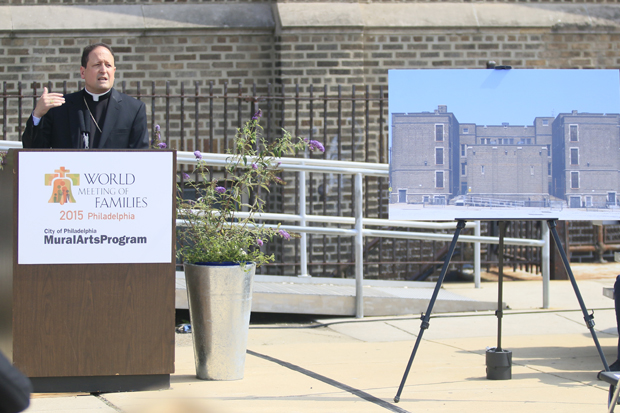 Someone took along books with Philadelphia murals and the idea came up of a mural to commemorate the Pope’s visit, according to Jane Golden, who is executive director for the program that has placed some 4,000 wall murals around the city.

“Donna Crilley Farrell (executive director of the World Meeting of Families) took the idea and ran with it,” Golden said. While Philadelphia’s murals produced by the program are mostly civic, “Faith is an important theme because faith is part of our community,” she explained. “Many of our murals have a spiritual feel.”

The mural’s preliminary design pictures and an extended family including grandparents, parents with a baby, children and Pope Francis, who is in conversation with a little boy, as well as religious symbols.

Several artists were consulted before Viveros’ design was chosen.

“For years I dreamed of painting a piece that could deepen the subject of spirituality on public venues,” he said, explaining why he jumped at the chance to paint a piece for Pope Francis visit: “This is very personal,” he said.

Viveros has been painting in Philadelphia for about 19 years and loves his profession. “I wish everyone had the opportunity to make a living painting pictures,” he said, “but you have to sacrifice so much to get there.”

Bishop John McIntyre, who presided at the announcement, said he had seen a copy of the proposed mural but actually visiting the site really put it into perspective.

“This is a different view and impression,” he said. “It is beautiful and there will be green space in front of it. It will be a beautiful reminder of the pope’s visit.”

Donna Crilley Farrell seconded that. “It is one of the most joyful parts of organizing the World Meeting of Families,” she said. “We told the artist we want it to be ‘The Family Fully Alive’ and you can see it in the faces.”

Back at St. Malachy School, Principal Steve Janczewski is preparing for the big move into the new, larger school and he sees it as a sign of the future for Catholic schools in the City of Philadelphia. 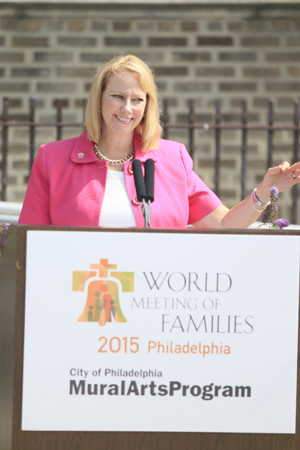 “It is an amazing mission and the mission is growing,” he said. “We have 180 kids now when we move we will have 400 to 500 and it will be a real service to the community.”

Meanwhile, the mural has to be painted. It will be done on approximately 153 panels, rather like painting by numbers. It will be painted by students at seven different locations beginning with St. Malachy’s and ending at the World Meeting of Families itself with final installation in November.

Portions of the mural will be painted throughout the summer by participants at seven other locations in the region including Children’s Hospital of Philadelphia; Divine Providence Village Day Services Program at Our Lady of Fatima Parish in Secane, Delaware County; Father Judge High School, with students of St. Hubert Catholic High School for Girls; Holy Family Regional Catholic School in Levittown, Bucks County; Holy Family Home, operated by the Little Sisters of the Poor, in West Philadelphia; St. Helena Parish in North Philadelphia and The Joseph Fund in Camden, N.J.

At St. Malachy School two of the student-artists will be Shyeem Bullock and Flor Peralta, both in grade five.

“I like the drawing of the picture,” Shyeem said. “Whoever painted it was a good artist and it will help when we paint it.”

Flor was impressed with the initial drawing also. “I like how the flowers look real,” she said, “and the kids and the people look like real kids and real people.” 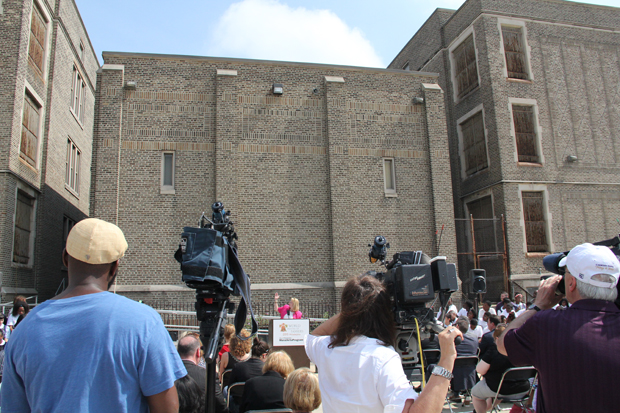 Donna Crilley Farrell at the May 28 announcement gestures toward the wall at St. Malachy’s that will host the 4,000-square-foot mural. (Sarah Webb)

NEXT: Keepsake items for World Meeting of Families unveiled