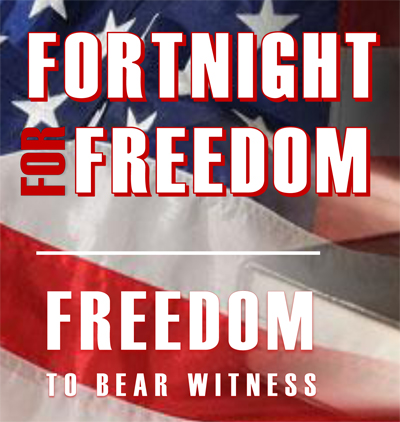 The Archdiocese of Philadelphia will host two ways to participate in the United States Conference of Catholic Bishops’ (USCCB) Fortnight for Freedom campaign: a presentation focused on same-sex marriage and a holy hour for religious freedom.

The annual Fortnight observance will be held this year from June 21 to July 4, and is themed “Freedom to Bear Witness.” The campaign focuses on public witness and advocacy for religious liberty especially in legislation.

The first event, hosted by the archdiocesan Office for Life and Family, will be a presentation from 7-9 p.m. on Thursday, June 25 in the Archdiocesan Pastoral Center auditorium, 222 North 17th Street in Philadelphia.

The presentation will focus on the issue of same-sex marriage and will be led by Jayd Henricks, executive director of the USCCB’s Office of Government Relations, and Father Joseph Cazenavette, USCCB policy advisor for marriage and family.

The presenters will discuss effects of legalized same-sex marriage and its implications for the church, as well as potential USCCB involvement and participation in policies involving marriage, based on their own professional and religious experiences.

The second event, hosted by the archdiocesan Office of Divine Worship, will be a holy hour for religious freedom on Sunday, June 28. The devotion will take place at the Cathedral Basilica of SS. Peter and Paul in Philadelphia, beginning with confessions at 5:30 p.m. and Mass at 6:30 p.m.

The Fortnight for Freedom campaign began in 2012 in an effort to advocate for public issues that concern marriage, family life. The Fortnight observance highlights opposition to legislation such as the overturning of the federal Defense of Marriage Act in 2013 that allowed for states’ recognition of same-sex marriage, and the Department of Health and Human Services mandate in 2014 that employers provide contraception to all employees.

Fortnight for Freedom expresses that these actions are not consistent with Catholic teaching. It also seeks to continue advocacy against these policies under the Religious Freedom Restoration Act of 2014, as well as encouraging prayer and public events throughout the nation.

Additional prayer resources and information on the Fortnight for Freedom 2015 can be found here and here.

PREVIOUS: How to plan a liturgy for 2 million people

NEXT: Catholic teachers and archdiocese closer to new contract