Scenes from the ordination of permanent deacons 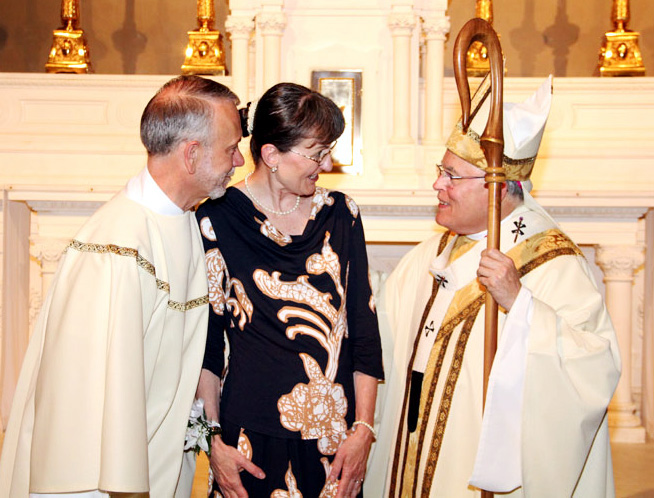 Mark J. Kuhn and his wife Suzanne chat the archbishop after mass

Twenty-one men were ordained to the permanent diaconate June 6 at the Cathedral Basilica of SS. Peter and Paul in a Mass celebrated by Archbishop Charles Chaput. Many of the approximately 300 deacons serving in the archdiocese supported their new brother deacons, who are ordained Catholic clergy. Of the 21 deacons ordained, 19 are married, and their wives and families filled the cathedral. Read full coverage of the Mass. (Photos by Sarah Webb) 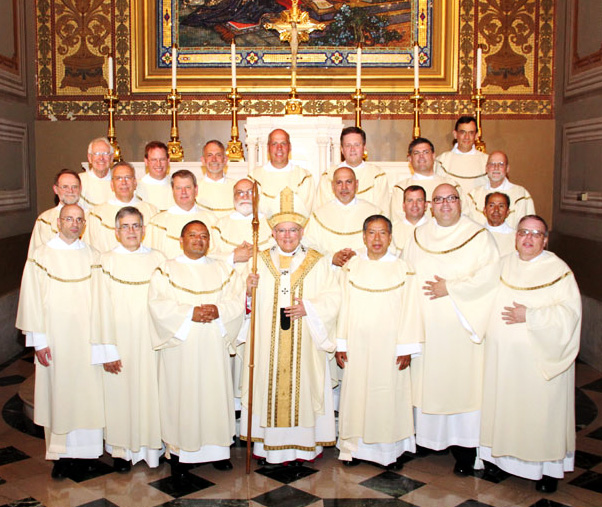 The 2015 ordination class of permanent deacons for the Archdiocese of Philadelphia, with Archbishop Charles Chaput (center). 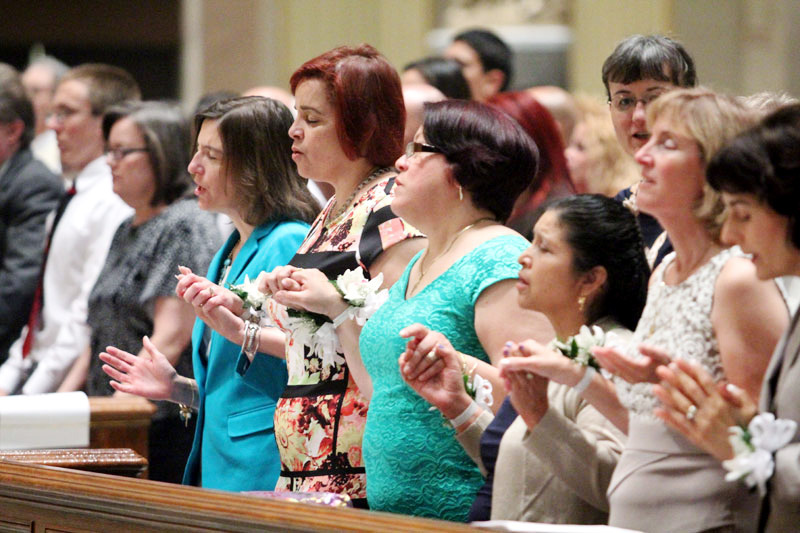 Wives of the deacons hold hands as they pray the Lord’s Prayer. 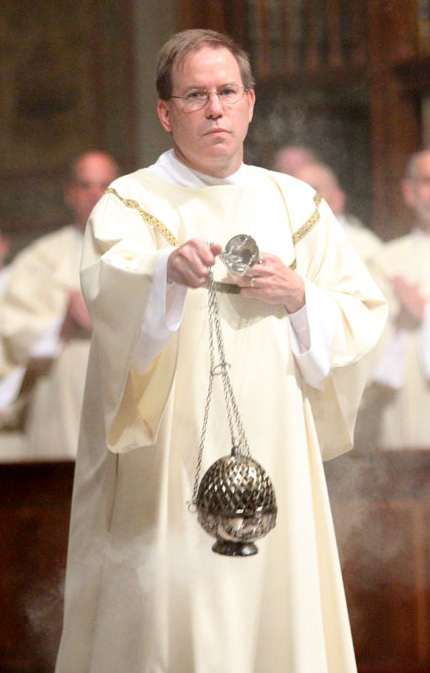 Deacon John P. Teson sends up billowing incense, and the prayers of the congregation, at the cathedral. 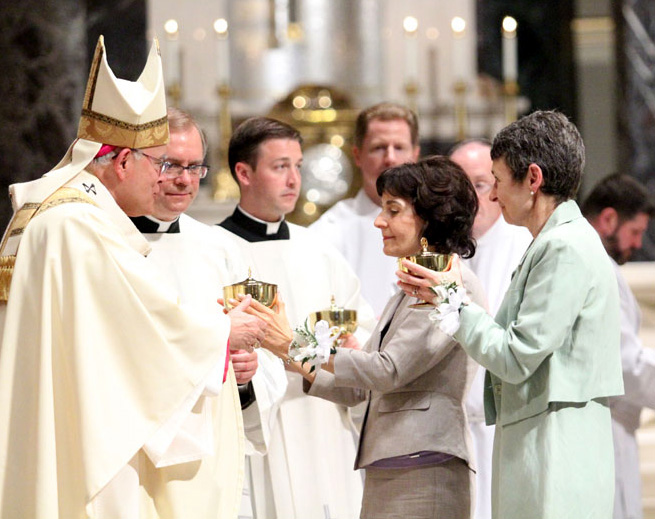 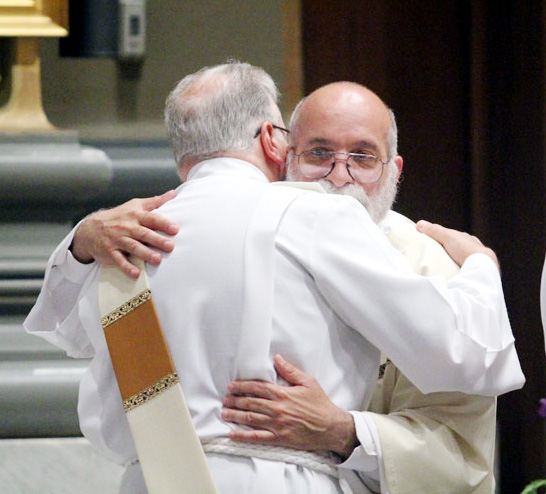 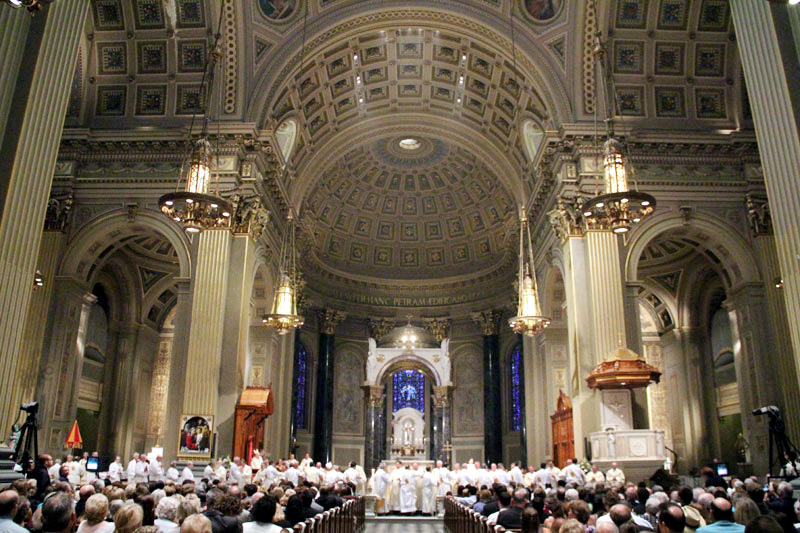 The deacons exchange a sign of peace during the Mass. 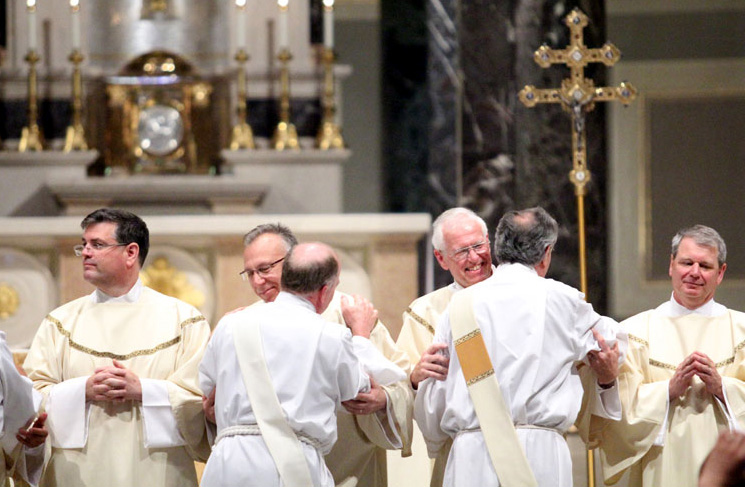 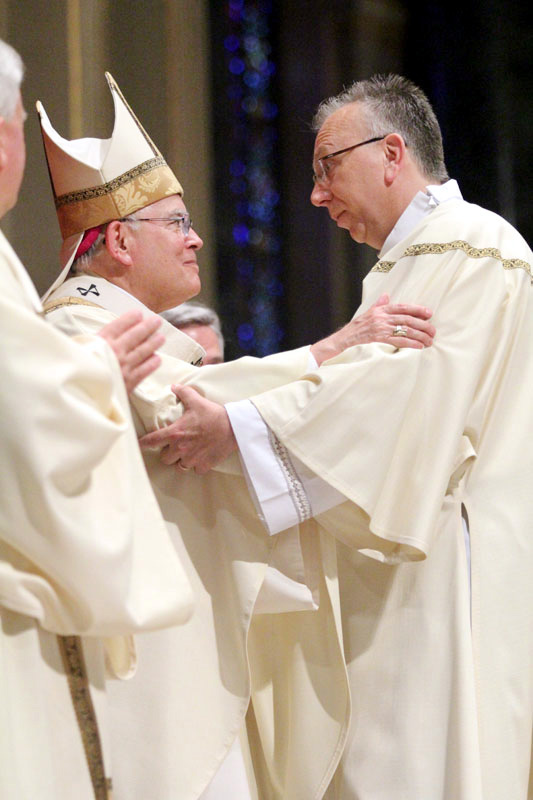 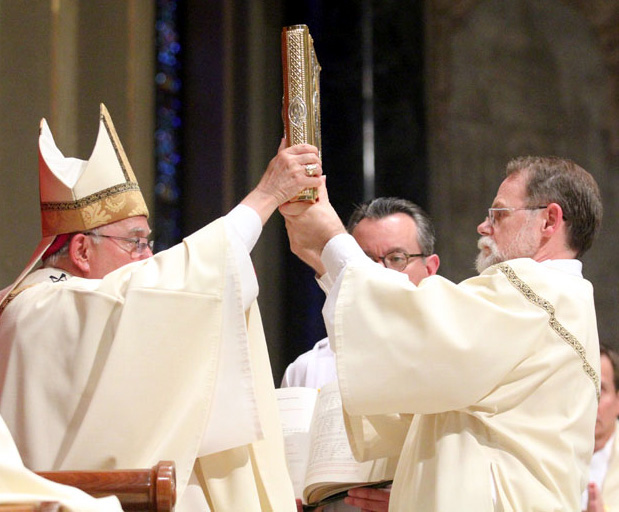 Archbishop Chaput hands the Book of Gospels to Deacon Paul A. Logan during the ordination rite. 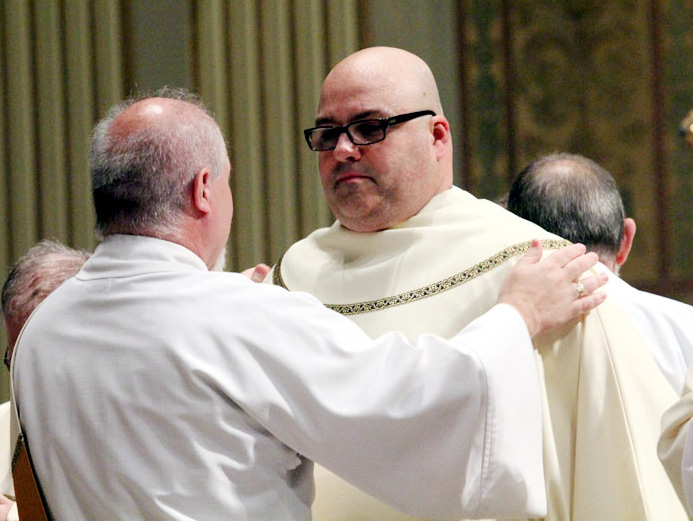 Deacon Michael J. Bell receives his dalmatic, the vestment of a deacon. 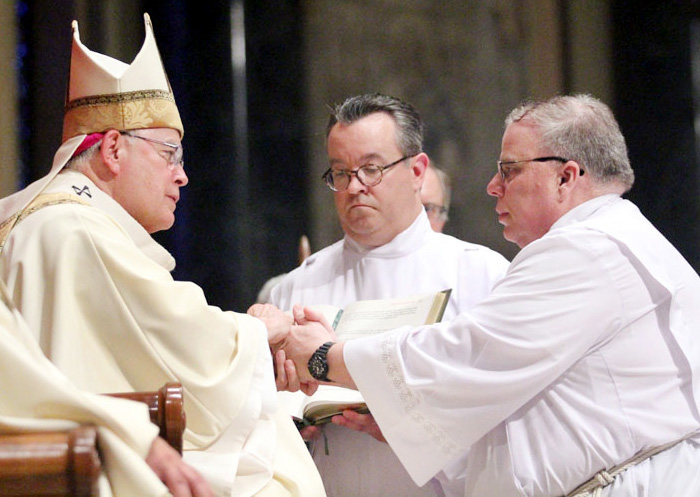 Deacon Edward T. Hinson makes the Promise of the Elect during the rite. 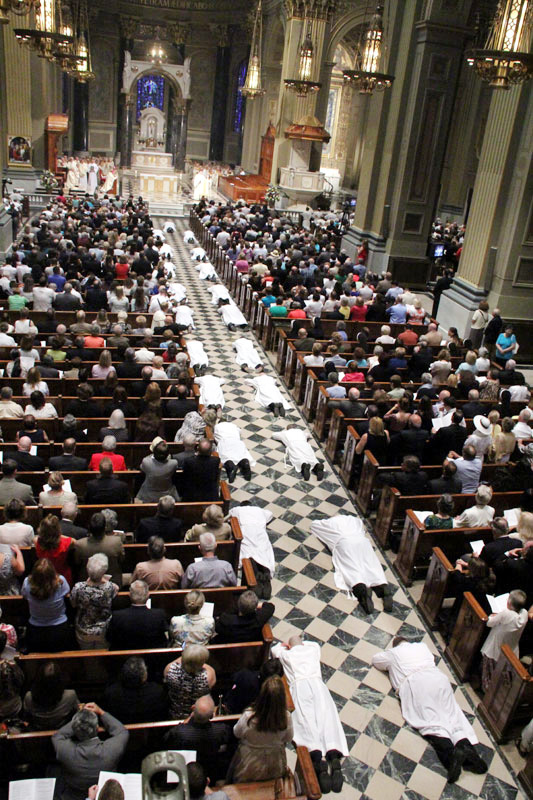 During the Litany of of the Saints, the deacons lie prostrate on the floor of the cathedral. 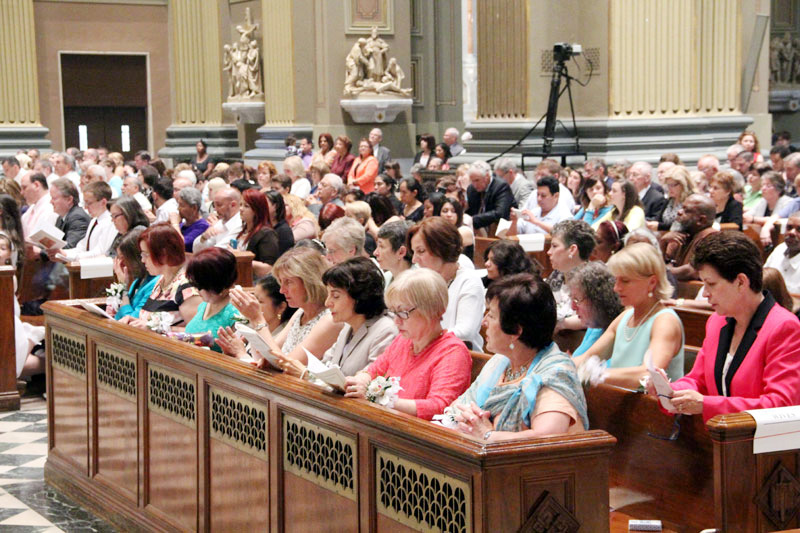 The wives of the deacons, along with all the people, pray the litany of saints as their husbands lay prostate on the aisle of the cathedral. 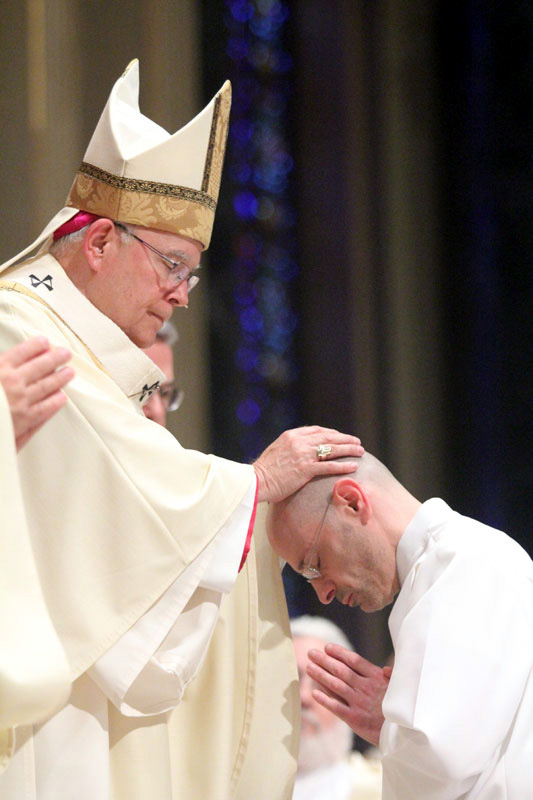 The archbishop lays his hands and prays the Prayer of Ordination, ordaining Deacon Olindo Mennilli. 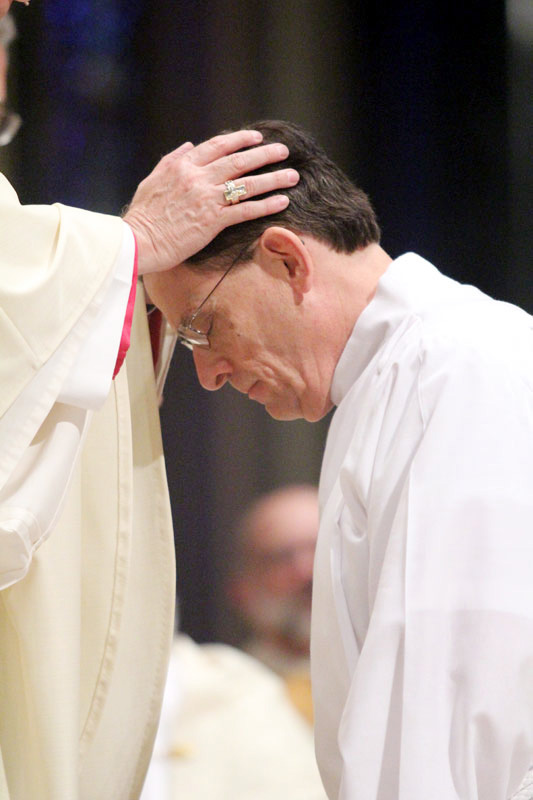 Laying on of Hands for Deacon Robert H. Hall. 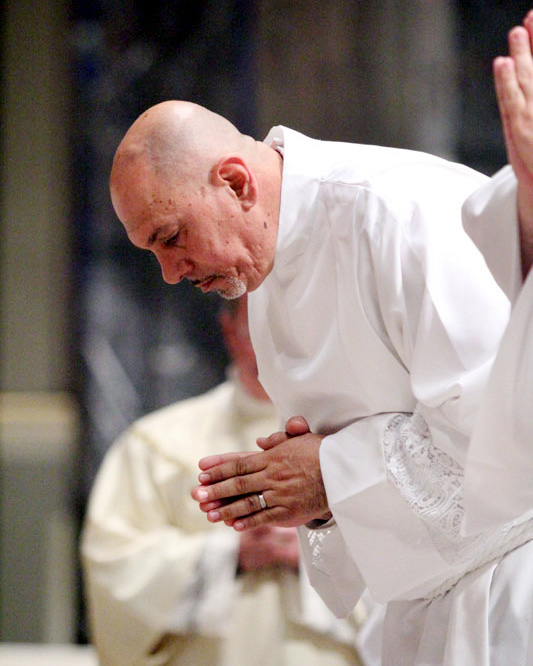 Deacon Manuel A. Beltran comes forward as his name is called during the rite. 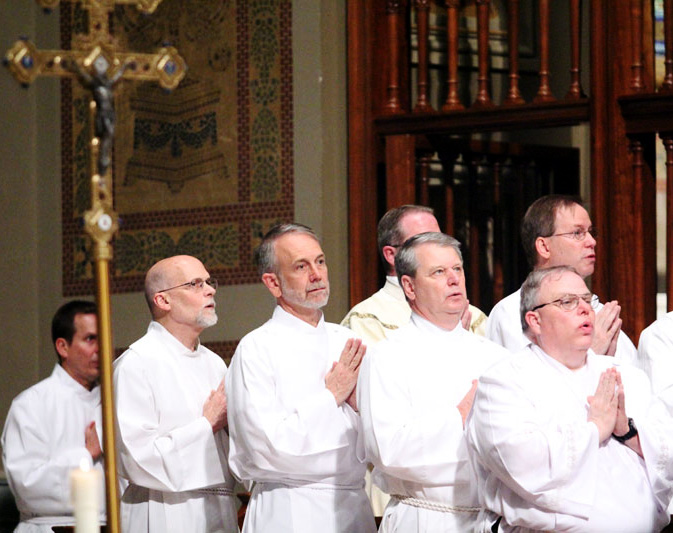 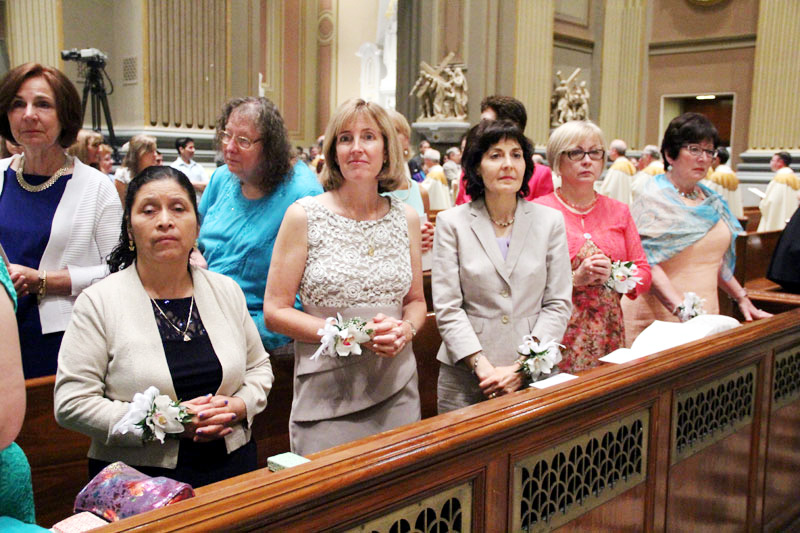 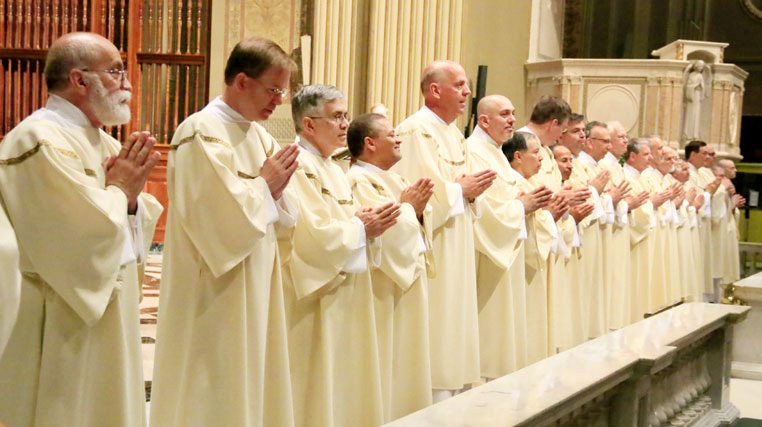 The newly ordained deacons line the altar rail to receive a fraternal kiss from fellow deacons.

Deacon Mark J. Kuhn and his wife Suzanne chat the archbishop after Mass.

NEXT: Father Judge, Little Flower grads go into the world