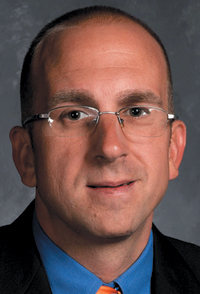 The Office of Catholic Education of the Archdiocese of Philadelphia (OCE) and Faith in the Future made the announcement July 9.

McFadden is a 1997 Archbishop Ryan graduate and the first graduate to serve as principal in the almost 50-year history of the archdiocesan school in Northeast Philadelphia.

He taught English at the school since 2001 and for the last two years served as assistant principal of academic affairs. Over the last 14 years McFadden created and piloted a course on film and writing, served on the English Curriculum Committee, was a Kairos retreat faculty leader and moderator of the yearbook.

In a statement, Archbishop Ryan President Denise LePera called McFadden “a solid choice to help lead us into this promising new chapter in our school history. I look forward to working over the next two months with Mr. McFadden as well as all of our administrators, faculty and staff to ensure that the 2015-2016 academic year at Archbishop Ryan High School is the best yet.”

McFadden holds his Bachelor of Arts degree in English/Secondary Education from Holy Family University in Philadelphia as well as a Master of Arts degree in English from Arcadia University in Glenside. He is a member of the National Council of Teachers of English, Lambda Iota Tau, National English Honors Society, the Archbishop Ryan President’s Advisory Board and the Christ the King School Board of Limited Jurisdiction.

NEXT: Listen up: Local Catholic radio station looks to expand