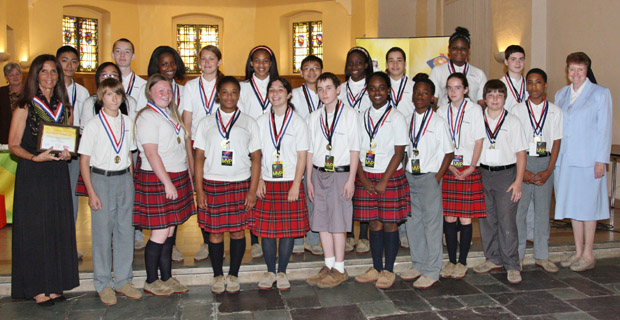 The seventh graders of St. Laurence School, Upper Darby, show their First in Math medals after an awards program at the school June 9. At left is seventh grade teacher Kathi Boudwin and at right is school principal Sister MaryAnne Bolger, I.H.M. (Photo by Maria Tucker)

Students and teachers from 26 Catholic grade schools in the Archdiocese of Philadelphia ranked nationally in this year’s First in Math competition.

The sixth and seventh grade students of St. Laurence School in Upper Darby ranked first among the archdiocesan parish and regional elementary schools. The school also ranked second among the 1,000 competing schools in Pennsylvania and fifth among 5,000 schools in the United States.

An awards ceremony June 9 at St. Laurence School recognized winners in five categories including various levels of competition in the region, state and the nation. This year, 20 archdiocesan elementary schools placed in the national top 100 schools in the math competition, which uses the 24 Game to reinforce arithmetic skills.

Dr. Robert Sun (a 1962 graduate of St. Francis de Sales School, Philadelphia) invented the 24 Game in 1988. In 2002 the game expanded and moved to the Internet under the title First in Math.

The online program begins Aug. 1 and ends April 30 each year. Students compete within their school, with other schools in the archdiocese, with over 1,000 schools in Pennsylvania and more than 5,000 schools nationwide.

PREVIOUS: Families march on the 4th to tout Catholic education

NEXT: Win a trip to the Holy Land