Don’t be afraid or ashamed to go to confession, pope says 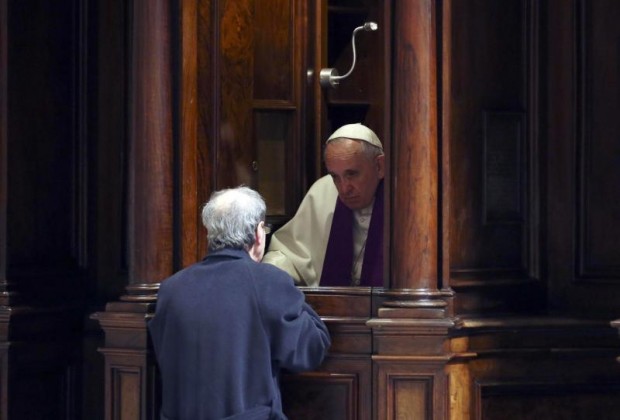 VATICAN CITY (CNS) — Trusting in God’s infinite mercy, people should not be afraid or embarrassed to go to confession, Pope Francis said.

“There are people who are afraid to go to confession, forgetting that they will not encounter a severe judge there, but the immensely merciful Father,” Pope Francis told thousands of people gathered in St. Peter’s Square Aug. 2 for the midday recitation of the Angelus prayer. (Watch a video of the address.)

The pope also told the people gathered under a scalding sun that “when we go to confession, we feel a bit ashamed. That happens to all of us, but we must remember that this shame is a grace that prepares us for the embrace of the Father, who always forgives and always forgives everything.”

In his main address the pope commented on the day’s Gospel reading from the Gospel of St. John, which recounts how the crowds followed Jesus after the miracle of the multiplication of the loaves and fishes.

“Those people followed him for the material bread that had placated their hunger the day before,” Pope Francis said. “They didn’t understand that that bread, broken for many, was the expression of the love of Jesus.”

“They gave more value to the bread than to the giver,” the pope said.

Feeding the crowd, he said, Jesus wanted to lead people to the Father and to a life that was about more than just “the daily worries of eating, dressing, success or a career.”

Every person has within him or her a hunger for life, for meaning and for eternity, Pope Francis said. Jesus satisfies that hunger with the gift of himself on the cross and in the Eucharist.

“Jesus does not eliminate preoccupations and the search for daily bread,” the pope said. However, “Jesus reminds us that the real meaning of our earthly existence is the end — eternity — the encounter with him, who is gift and giver.”

In giving himself, Pope Francis said, Jesus also gives people a task: “that we, in turn, satisfy the spiritual and material hunger of our brothers and sisters by proclaiming the Gospel everywhere.”

Editors: A related video can be viewed at

NEXT: What’s the rule on meatless Fridays?