Mary’s assumption shows life’s aim is to be with God, pope says 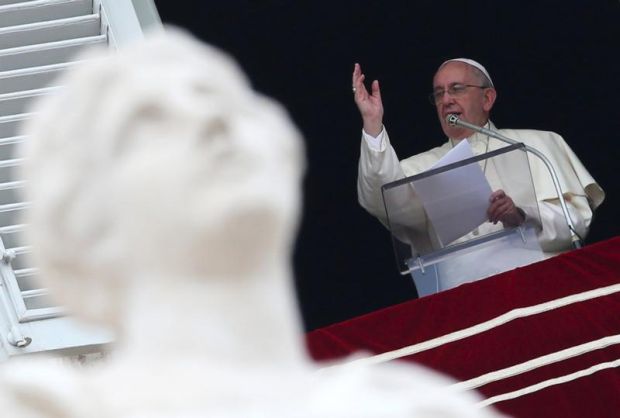 Pope Francis blesses the faithful during his Angelus address on the feast of the Assumption at Vatican Aug. 15. (CNS photo/Alessandro Bianchi, Reuters)

VATICAN CITY (CNS) — Mary’s assumption into heaven and, in fact, her entire life show believers the great things that God has in store for them, Pope Francis said.

“The ‘great things’ the Almighty has done for her touch us deeply, speak of our journey through life and remind us of the destination that awaits us: the house of the Father,” Pope Francis said Aug. 15, the feast of the Assumption.

Before leading the recitation of the Marian prayer at the Vatican, he spoke about Mary’s “Magnificat,” her hymn of praise for the great things the Lord has done.

“She is a believer — the great believer,” the pope said. “She knows and she says that history is weighted down by the violence of the powerful, the pride of the rich and the arrogance of the proud.

“Nevertheless, Mary believes and proclaims that God does not leave his humble and poor children alone, but rescues them with his mercy and his care, toppling the powerful from their thrones,” the pope said.

The assumption of Mary, body and soul, into heaven, he said, is a sign to all believers that life “is not a senseless wandering, but a pilgrimage that, although there are uncertainties and suffering, has a sure goal: the house of the Father, who awaits us with love.”

After the Angelus, Pope Francis offered prayers for the people of Tianjin, China, where explosions at chemical factories Aug. 12 led to the deaths of more than 110 people and injured more than 700.

Pope Francis was back at the window of the old papal studio overlooking St. Peter’s Square Aug. 16 to lead the recitation of the Angelus as is customary on Sundays.

In his talk, he focused on the day’s Gospel reading from St. John in which Jesus says, “Whoever eats my flesh and drinks my blood has eternal life.”

The Eucharist, the pope said, truly is the body and blood of Christ and is given to believers so that they can become one with him.

Sometimes people will say they do not see a particular reason to go to Mass and, anyway, “I pray better alone,” the pope said. “But the Eucharist is not a private prayer or a beautiful spiritual experience; it is not a simple commemoration of what Jesus did at the Last Supper.”

The Mass, he said, makes present the death and resurrection of Jesus. “The bread is truly his body given for us and the wine really is his blood shed for us.”

When one receives Communion with faith, he said, it should transform his or her life, making it a gift to God and to others.

“Nourishing ourselves with that ‘bread of life’ means entering into harmony with the heart of Christ, assimilating his choices, his thoughts, his behavior,” the pope said.

PREVIOUS: Not everyone likes a two-state solution in the Middle East

NEXT: Don’t forget an important birthday coming up