After seeing the pope in Paraguay, church official comes home 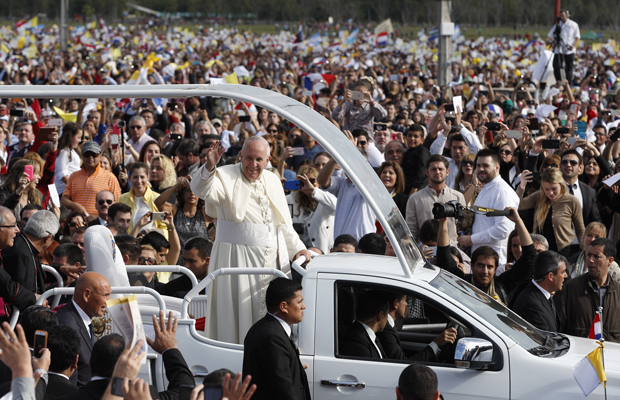 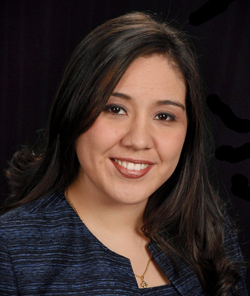 Kathia Arango, director of the archdiocesan Office for Hispanic Catholics.

In a way Katia Arango’s visit to Paraguay in early July along with her husband, Andrés, was a dress rehearsal for her participation in the World Meeting of Families in Philadelphia Sept. 22-25.

She will and Andres will present one breakout session and she will moderate another before joining the rest of Philadelphia and the world in welcoming Pope Francis on Sept. 26-27.

Arango, who is the director of the Office for Hispanic Catholics of the Archdiocese of Philadelphia and a native of Paraguay, was invited back to her birth country to help plan for the participation of Paraguayans returning from abroad for the visit of Pope Francis on July 10-12. It was the final leg of the pope’s pastoral visit to Ecuador, Bolivia and Paraguay.

“I worked for the Asunción Diocese before I came to the U.S.,” she explained.

This would not be her first time to see the pope; she was in Rome for a huge charismatic renewal on Pentecost 2013.

Paraguay is small country, with a population of about 6.7 million, just a little over half of that of Pennsylvania. Nevertheless, the crowds were huge, and Arango believes about half of the people in the country got to see Pope Francis at one venue or another, which may not be far from the truth because Paraguay is almost 90 percent Catholic; the most thoroughly Catholic country in the Western Hemisphere.

During his three-day visit Pope Francis had three major public events – a Mass celebrated at the Basilica Shrine of Our Lady of Caacupé, which is a special devotion of Paraguay; an encounter with youth and young adults in the Costanera riverside area of the capital, Asunción, and a field Mass in Campo Grande in Luque, a suburb near the capital. 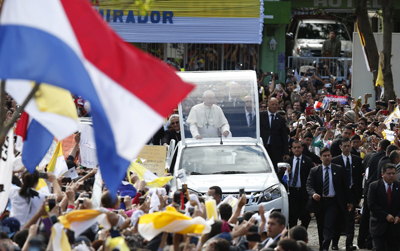 The Luque Mass was preceded by an all-night vigil in which Arango participated and led a Holy Hour.

She was especially impressed by Pope Francis’ direction that some of the prayers should be recited in Guarani, the second official language of Paraguay, which is spoken by the indigenous people in Paraguay and surrounding countries tracing back to before the conquest by Spain and Portugal.

Pope Francis, when he was Archbishop of Buenos Aires, had a congregation in his archdiocese where the people still spoke Guarani, Arango explained.

It is noteworthy that Pope Francis is a Jesuit, and the Jesuits were the first missionaries to the region. They risked their own lives in the beginning from the natives, but later from rapacious European settlers who cruelly persecuted and enslaved the Guarani. The 1986 film “The Mission,” which dramatizes the work of the Jesuits among the Guarani, is fiction in details but accurate in the broad sense.

Arango was most impressed by the earlier encounter of Pope Francis with the youth and young adults at Costanera. (See his remarks, both the prepared and extemporaneous versions, at vatican.va.)

This meeting included a liturgy, music, choreography and a presentation by young people of the realities their lives. Liz, a 25-year old nurse, spoke of how she had put her own aspirations on hold to care for her invalid mother and grandmother. She recently recovered her lost faith and was volunteering in youth ministry. 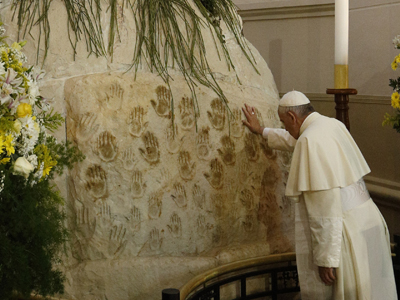 Pope Francis touches the base of the statue of Our Lady of Caacupe before celebrating Mass outside the Caacupe Marian Shrine in Asuncion, Paraguay, July 11. (CNS photo/Paul Haring)

Manuel, 18, was from a rural area before his family moved to Asunción for his father’s hopeful employment. Manuel was exposed to the harsh realities and temptations of an urban barrio, which he ultimately overcame.

“Pope Francis had a speech, but at the end of the youth testimony he said, ‘Do you know what, my speech is boring. I want to speak to you from the heart,’” Arango remembers.

“Liz,” Pope Francis said, “is obeying the Fourth Commandment: ‘Honor your father and your mother.’ Liz offers her life in service to her mother. It is indeed a high degree of solidarity, the highest degree of love. This is witness — ‘Father, is it possible to love?’ There you have a person who shows us how to love.”

“Manuel,” Pope Francis said, “was not a spoiled child. He was not a ‘good kid.’ He was never a ‘kid,’ a young person who had it easy in life. He used strong words, ‘I was taken advantage of, I was mistreated, I risked falling into addiction, and I was alone.’”

Pope Francis complimented Liz and Manuel for conquering the difficulties of their lives though faith, and encouraged the other young people to do the same.

“He was supposed to talk for 20 minutes, it must have been an hour,” Arango recalls.

For her, the visit of Pope Francis to Paraguay was exciting.

“He told us we have to go out and work for the poor,” she said. “He told us we must not only give money, we must shake the hands of the poor. I think it will be exciting here too with the World Meeting of Families. We are waiting for him.” 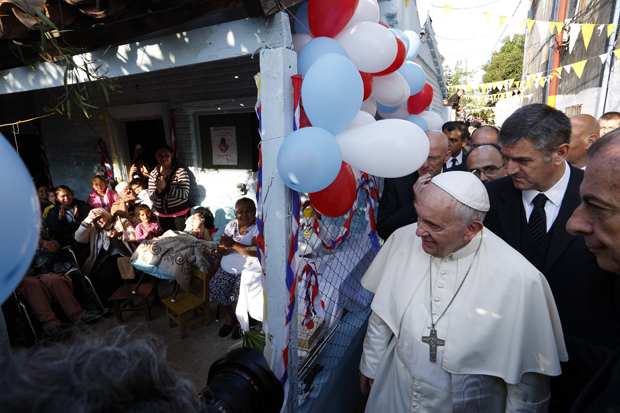