Church a tender mother, not a rigid association, pope says 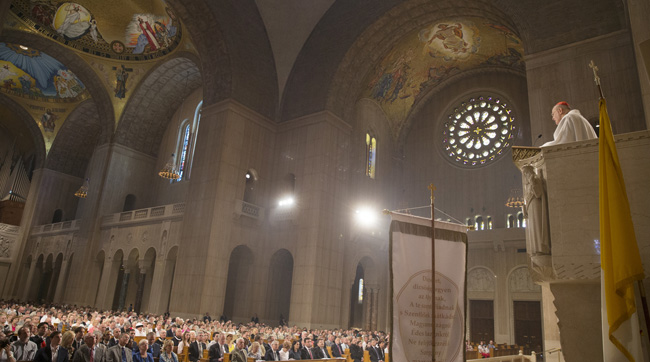 Cardinal Peter Erdo of Esztergom-Budapest, Hungary, celebrates Mass at the Basilica of the National Shrine of the Immaculate Conception in Washington, Aug. 29. He was in Rome Sept. 15 for a meeting of the Council of Cardinals who advise Pope Francis on reforms of the Roman Curia. (CNS photo/Michael Reynolds, EPA)

VATICAN CITY (CNS) — If the church loses touch with its maternal side, the only thing that remains is “rigidity and discipline,” Pope Francis said at an early morning Mass with members of the international Council of Cardinals advising him on the reform of the Roman Curia.

Celebrating the feast of Our Lady of Sorrows Sept. 15 with the nine cardinals and other guests, Pope Francis focused on Jesus’ words from the cross entrusting Mary to his beloved disciple as mother.

As Jesus was dying, the pope said, Mary “becomes a mother another time,” and her maternity expands to embrace the disciple and all those who will come to follow Jesus throughout history.

Jesus had told his disciples, “I will not leave you orphans,” the pope said, and he kept his promise by giving Mary to be their mother.

“We have a mother who is with us, protects us, accompanies us and helps us even in difficult times and at terrible moments,” the pope said.

The church, too, is called to be a mother to all Jesus’ followers, he said. “Our ‘holy mother church'” is what Christians are born into at baptism and is the community that helps them grow.

“Mother Mary and mother church know how to caress their children and give them tenderness,” Pope Francis said.

Referring several times to the writings of the 12th-century, England-born Abbot Isaac of Stella, France, the pope said that while it could shock people, he believes the abbot was correct in teaching that “our soul is mother as well,” and that is seen in both men and women when they demonstrate “humility, welcome, understanding, goodness, forgiveness and tenderness.”

Where there is a sense of the maternal, he said, “there is life, there is joy, there is peace,” but when that maternal instinct is missing, there is just “rigidity and discipline.”

NEXT: Coming for the papal visit? Think of the refugees’ hardships