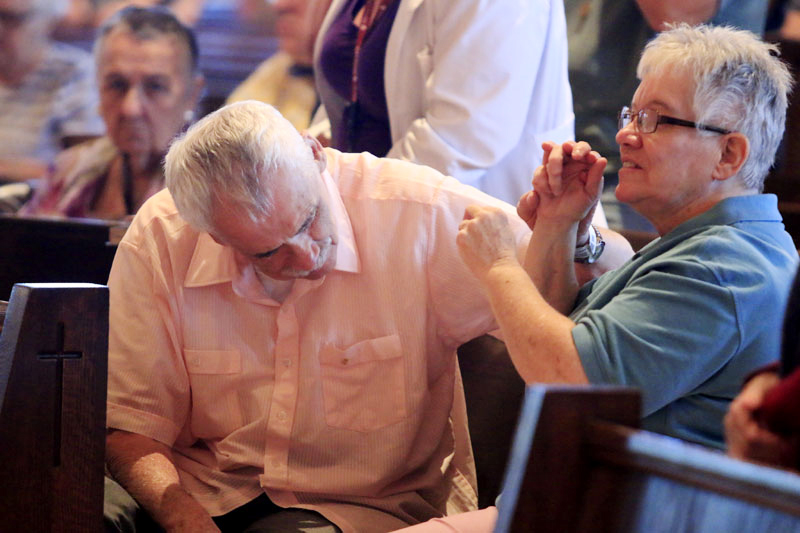 Edith, an interpreter (right), uses touch to sign the words of the Mass for Robert Kern, who is blind and deaf. (Sarah Webb)

The Gospel text couldn’t have been more appropriate, although totally unplanned. It was the Twenty-Third Sunday in Ordinary Time, Mark 7:31-37, in which Jesus heals the man who was deaf and mute.

At St. John Chrysostom Church in Wallingford it was the first Sunday of the month, when the parish celebrates its monthly Mass of Welcoming and Inclusion to which children and adults with disabilities and their families are especially invited.

Sept. 6 happened to be the second such Mass and the first to invite members of the deaf community.

(See a photo gallery from the Mass and watch a video below.)

“Our community this morning is complete because you are here,” said St. John’s pastor, Father Edward Hallinan, in his homily. “I apologize to the deaf community because we have not acted sooner. Everyone is welcome. Everyone is cherished.”

Because it was one of St. John’s regularly scheduled Masses, the congregation was composed of people without discernable disabilities as well as others with visual impairment, hearing impairment, physical impairment and cognitive impairment, worshipping together as children of God.

Although the Mass was inaugurated in August, it traces back to more than a year ago when a ministry was formed in the parish to focus on persons with disabilities. 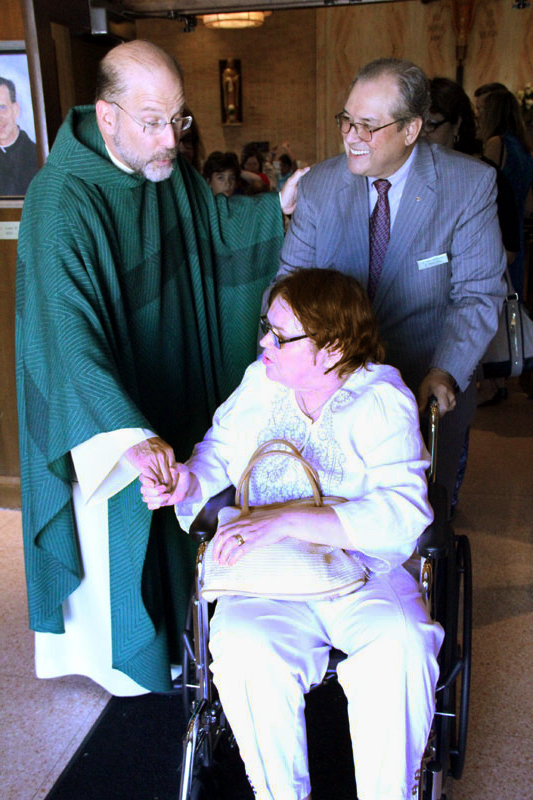 “We were just talking about how to include members who couldn’t come to Mass for various reasons,” said Joanna McGowan, a committee member. “My son Christopher has severe autism and I thought through my experience with that I could contribute to the committee and help others. The Mass is important and it lets other parishioners know this part of our community exists and they need to be tolerant and accepting.”

Because it fills a unique need the Mass is serving not only members of St. John’s. Gloria Gallagher, a registered nurse, accompanied six hearing-impaired elderly residents of Mercy Live Valley View, Exton, to the Mass.

“It’s a privilege for me to be here,” she said. “My sister lost her hearing when she was 10 and I learned sign language but didn’t practice it for 30 years. I can’t be with my sister at her church in Chicago, but it’s an honor for me to be here.”

The Mass was of course signed in American Sign Language, thanks to a young volunteer, Sarah Cardie, who is studying for her degree in sign interpretation. “I definitely had to practice for this, but the deaf really inspire me and I definitely get something out of it for my own spirituality,” she said.

Grace Houseman, who ordinarily worships at St. Cornelius Church in Chadds Ford, brought her hearing-impaired daughter Gracie to the Mass. “We are so lucky Father Hallinan has done this for our children,” she said.

Father Hallinan recalled meeting parents who were not coming to church because their child’s disability was such that they might be disruptive during the liturgy. “They needed a Mass just for them,” he said. “This was listening to parents of children with disabilities and reaching out to them.”

The program at St. John’s is headed by parishioner Kristina Vacha, a behavioral therapist and licensed social worker with the Devereux Adult Autism Partnership, who gives credit for Father Hallinan and Sister Kathleen Schipani of the archdiocesan Office for Persons with Disabilities and the Deaf Apostolate for getting the Mass started.

Vacha estimated there were about 100 persons with disabilities or hearing impairment and family members at the Mass along with several hundred other congregants. But for her it is not just doing something for people with disabilities, it is about integrating and involving them in the community.

For this reason various ministries including greeter, altar server and cantor were filled by people with disabilities. And in addition to the Mass they participate in the parish in other ways. For example a program that prepares casseroles for St. John’s Hospice utilizes young adults with disabilities and their parents in food preparation.

“They are serving the poor and everybody is happy,” Vacha said.

NEXT: Shocker at Mass: Family learns they’re going to meet the pope