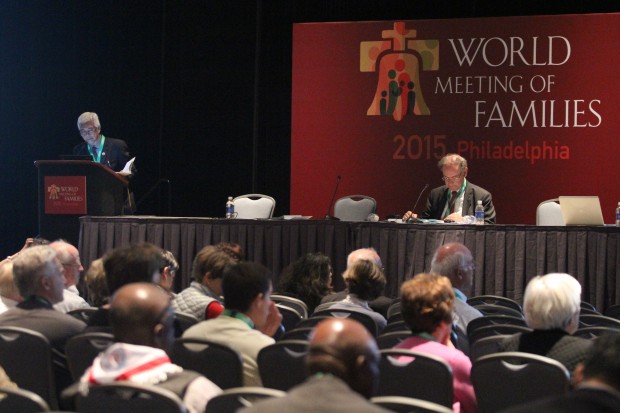 Experts speaking at a World Meeting of Families session Wednesday, Sept. 23 in Philadelphia told delegates that fertility rates around the world are dropping, and a global demographic shift is taking place.

In one of only four sessions at the World Meeting to offer English speakers the opportunity to test out the congress’s simultaneous interpretation services, a panel representing the entire globe presented “Family and Demographic Dynamics of the World” in a mixture of English and French.

Examining Europe, French economist and demographer Gérard-François Dumont presented five worldwide demographic changes at work and their accompanying consequences, beginning with perhaps the most notable: the demographic transition and decline in fertility.

Dumont explained that as childhood morbidity declined in many countries in the latter half of the 20th century, people began having fewer children because it was no longer necessary to give birth to five in order to have three survive childhood. Correspondingly, the fertility rate dropped from an average of five children born to each woman in the 1950s to about 2.5 today.

Some countries that have already finished their demographic transition are currently experiencing a “demographic winter,” Dumont said, where birthrates are below the threshold of replacement to keep the population at its same level 30 years from now. This is most notably the case in Europe and in the Asian countries of Japan, China and Taiwan.

Dumont noted that if there is an overall world population increase, it is not because some couples are having too many children as some might say, but because of increasing survival rates as our planet’s inhabitants stay longer on the earth.

A second demographic force at work that Dumont described is urbanization. Rural people are migrating to the cities, in many cases prompted by political disruptions that lead them to seek refuge in urban centers, resulting in a distancing between generations.

International migrations represent a third force affecting families, particularly if individuals migrate to countries that do not allow the migrant to bring his or her family.

An increase in life expectancy combined with a decline in fertility rates has resulted in the fourth striking demographic change: the aging of the world’s population. There has never before been such a high percentage of adults over 65 relative to the percentage of the population under 15, Dumont said.

He added that in societies with a proportionally large aging population, questions of euthanasia arise while solidarity between generations declines. In contrast, elders tend to be highly respected and revered in societies where the proportion of the aged population is low.

Finally, there has been an increase in the birth of baby boys, as people in societies where boys are more highly valued than girls can now know the baby’s gender in advance and selectively abort the girls.

In areas like Northern India and China, where the disparity between male and female birth rates is extreme, young men face difficultly in simply finding someone to marry, and the practice of human trafficking to bring women from other countries becomes a problem.

Dumont’s recommendations regarding the policy implications of these demographic changes include promoting women’s education to raise their status in countries where they are given lesser value, and making plans to accommodate the aging population.

He also called for protections for families in the interest of society, such as reducing the obstacles for couples to start a family, respecting a couple’s privacy in their choice of the number of children to conceive and creating policies to accommodate families of larger sizes.

The data from both Western Europe and Central and South America reveal the highest rates of cohabiting adults, with cohabitation rates of 10 to 15 percent worldwide; marriage rates range between 40 and 50 percent in Europe.

Peru had the highest South American cohabitation rate at 38 percent. In contrast, in the Middle East the vast majority of couples were married, with very few cohabitating.

Costa Rica was a notable Latin American exception to the region’s high cohabitation rates. Salazar attributed to the country’s extremely low cohabitation rate to its conservative culture. Dumont added that Costa Rica is also the only country in the region without political strife.

The marriage decline has been linked to multiple factors: couples waiting for financial stability before marrying; a view of marriage as the end of the road rather than the start of a journey; difficulties for low-income women in finding a marriage partner, which leave them to choose between remaining childless or having a child outside of marriage; economic changes that offer less stable and lower salaried jobs; changes in sexual norms; a decline in religious participation for the non-college educated, legal changes that emphasize parenthood and individual rights rather than marriage; the tendency of young people to continue living with their parents in times of crisis; and a greater focus on independence combined with a decreased focus on responsibility.

According to Salazar, some policies that could help foster marriage include: training people for jobs that would give a more stable income for marriage; eliminating tax penalties on married couples; giving child tax credits; investing in preschool education; reforming existing divorce laws to strengthen marriage and reduce the number of “unnecessary” divorces; offering credit access to young people forming a family through marriage; offering education in family formation, and support of the family through the media.

Representing Asia, home to 6.4 billion people, or three-fifths of the world’s population, Dr. Villamor Vital of the Philippines followed with a presentation on a paper by Dr. Mina Ramirez: “Vanishing youth? A Situation of Asia’s Children.” The data looked at the physical and educational well-being of children in Asia.

Vital concluded that material poverty needs to be addressed as a threat to the well-being of children.