Like others in city, Pope Francis visits knotted prayers near cathedral 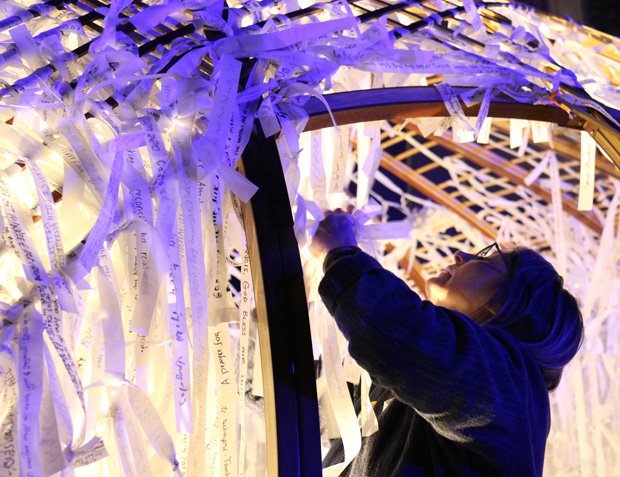 A volunteer ties inside the "Knotted Grotto" ribbons containing written intentions for which people have prayed on Friday night, Sept. 25. (Photo by Bob Kelly)

In an unplanned gesture before the papal Mass on Sunday, Sept. 27, Pope Francis stopped his motorcade in front of the Cathedral Basilica of SS. Peter and Paul on 18th and the Benjamin Franklin parkway to visit the “Knotted Grotto” devotion.

For the past month a 10-foot-high wooden lattice-work dome built in front of the cathedral’s chapel has invited people to write a prayer intention on a white ribbon and tie it in a knot onto nearby fences, then untie another ribbon, pray for that person’s intention, and tie it inside the dome.

It is all under the patronage of Mary, Untier of Knots, a personal devotion of Pope Francis, and he paused to pray before a painting of Mary hung on a cathedral wall.

He also met there with Sister Mary Scullion, who conceived the project as a way for people to remember each other, especially the unfortunate, in their prayers by the example of Pope Francis.

The Sister of Mercy is cofounder of Project HOME, one of the most successful organizations serving homeless people in the city, and a well-known advocate on the issue of homelessness.

Many of the prayer ribbons refer to people recovering or struggling with addictions, dealing with joblessness or mourning the death or sickness of loved ones.

Since its installation by artist and designer Meg Saligman, 100,000 ribbons have been tied in a burgeoning tapestry of knotted ribbons, more than 10,000 a day since the World Meeting of Families began in Philadelphia Sept. 22.

Long after the papal Mass had ended, people still flowed to the cathedral and prayed over the knotted intentions, physically untying them and devoutly relying on Mary’s aid. 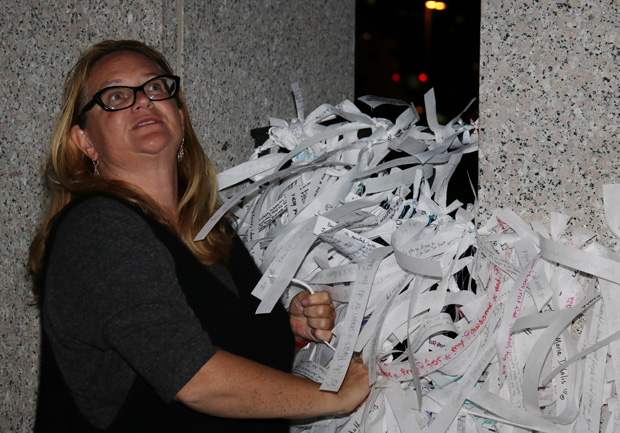 NEXT: Faces of joy and devotion mark unforgettable papal Mass