Watching papal Mass in their church, parishioners join in spirit 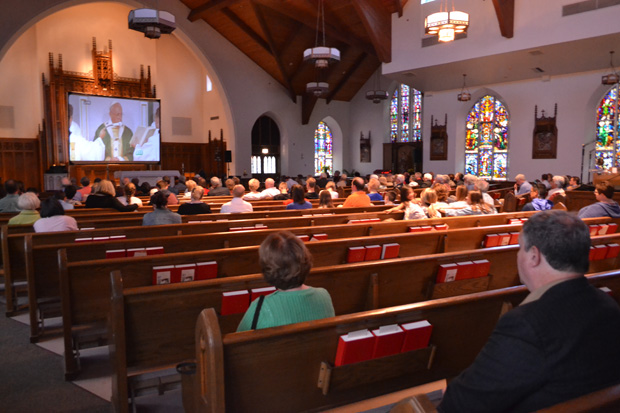 Parishioners of St. Monica Parish in Berwyn watch the Mass celebrated by Pope Francis on a big-screen TV in the church. (Elena Perri) 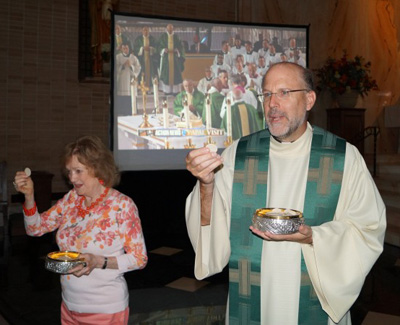 While hundreds of thousands of people attended the Mass celebrated by Pope Francis last Sunday on the Benjamin Franklin Parkway in Philadelphia, many other Catholics across the archdiocese stayed close to home to view the Mass on a widescreen TV in their parish church.

At St. Denis Parish in Havertown, approximately 100 people gathered in the church to watch the Mass.

Parishioner Stephanie Norton was at the church with her daughter Anna, 8, and Audrey, 5.

“I didn’t want to bring them downtown because of the crowds and having to stand for long periods of time,” Norton said. “We felt like this was the next best alternative that they were still a part of his visit, even though we couldn’t go downtown.”

Like many people across the archdiocese, Norton enjoyed watching the papal events on TV. “It’s been great,” she said, adding they watched the Festival of Families on the parkway the previous night at home. “It was really heartwarming to see the families who came up and spoke. The pope is such a wonderful speaker. His message about families was moving and really inspiring. It was wonderful.”

She jokingly described the Holy Father as “everybody’s grandfather.”

“He’s very much like a grandfatherly type of person,” Norton said. “It’s like you can tell he’s truly holy – just how he reaches out to people. He’ll go out of his way to reach out to people.”

Tim O’Malley was also viewing the Mass with his wife Lauren and son Liam, 5, at St. Denis. O’Malley attended the Festival of Families, which he called “pretty amazing.”

“It was a long day, but I got to meet people from all around the world,” he added. “To see the pope come in was inspiring, and when his motorcade came up the parkway, your heart kind of jumps. It was an incredible, surreal moment.”

While O’Malley didn’t have tickets to the papal Mass, he wanted to join other parishioners in watching the Mass.  “We’ve been watching the coverage pretty much all day,” he said. “To be able to watch the Mass in our own church is pretty exciting.”

O’Malley describes the Holy Father as humble, loving and generous. “I think he inspires Catholics and non-Catholics and non-believers,” he said. “Some of my friends who strayed from the church are starting to come back. I think he came at the right time when the church really needed him.”

At St. Monica Parish in Berwyn, approximately 100 people came to the church to watch the papal Mass and gather for dinner afterward.

Stephanie Walsh Beilman, a member of St. Monica’s, is hopeful the pope’s visit will have a positive impact on the archdiocese.

“We needed the pope to come here, and I think it’s been the best thing for the Catholic Church in Philadelphia,” Walsh Beilman said. “We’re happy that he was here.”

Nicole Baker, who plays the organ at St. Monica’s, participated in the World Meeting of Families Congress at the Pennsylvania Convention Center last week.

“It was a great meeting of minds and a great community spirit with people coming together and opening up to one another,” Baker said. “I heard some people calling it ‘the new Philadelphia.’ A worker at the Convention Center I was talking to, who wasn’t Catholic, said that he liked how Pope Francis was opening up a spiritual conversation in Philadelphia.”

She added that the pope is “very perceptive and sensitive to people’s needs. He’s warm and loving, and he’s trying to bring people together as one Catholic family.”

“You get such a better view from TV. I know it’s not the same, but I was there in spirit,” Williams said. “I had time to reflect during the day as I was watching TV.”

“It’s very touching that he’s so humble and down to earth,” she said. “He’s just an amazing man who is hoping for peace throughout the world. I think he’s inspiring to more than just Catholics as a world leader.” 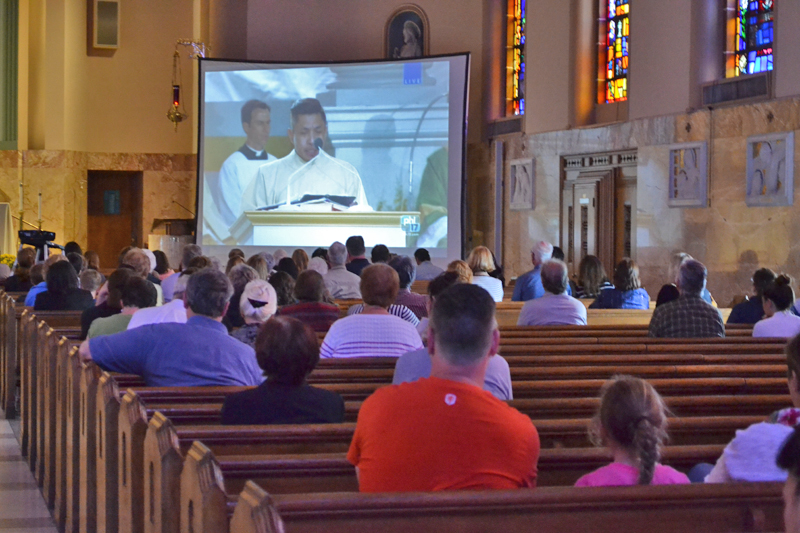 PREVIOUS: Virginia infant, clad in a tilma, gets kiss, blessing from Pope Francis

NEXT: Street cop says crowds for pope prompted frustration, but excitement too