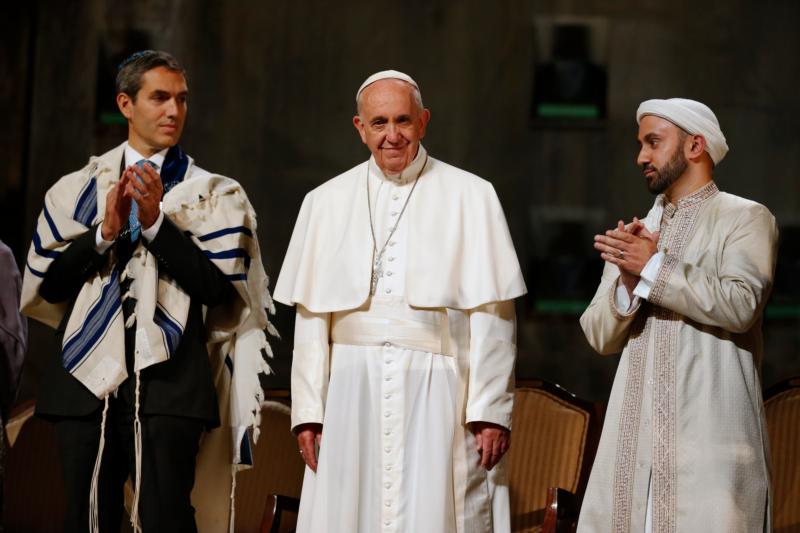 The following opinion was published Sept. 29 in The Jerusalem Post. It was written by Rabbi Elliot Cosgrove of Park Avenue Synagogue in Manhattan. The rabbi and Imam Khalid Latif, the Muslim chaplain at New York University, offered reflections before Pope Francis spoke at a multi-religious gathering Sept. 25 in Foundation Hall at the 9/11 museum.

It is an experience like no other to meet the pope, with whom I exchanged warm greetings of peace and fellowship on behalf of the Jewish community.

It is not every day that a Jewish kid gets to sit at the right hand of the Holy Father. Friday was my once in-a-lifetime opportunity to do so. It was an event, in the words of one of my children, “even bigger than my bar mitzvah,” and a wonderful way to cap off an otherwise quiet week on the Jewish calendar.

It is an experience like no other to meet the pope, with whom I exchanged warm greetings of peace and fellowship on behalf of the Jewish community. He exuded a gentle warmth and kindness, and despite his whirlwind schedule struck me as totally “in the moment” for the historic gathering. For those of us assembled on that hallowed ground where the twin towers once stood, the iconic value of the event was extraordinary.

This pope, we know, understands the power of an image.

An assembly of diverse faith leaders assembled in friendship at the very site where religion was leveraged to justify acts of horrific violence was a statement to all those present and, I imagine, to the entire world. Every clergyman shares a pastoral calling to provide comfort, and it is my hope that the event succeeded in that sacred gesture. The day was a reminder to me that we must remain fully committed to remembering those who perished on 9/11, grapple with the permanent scar that day left on our collective psyche and communicate that commitment to our children.

There are so many dimensions of the day I will always want to remember. There was the memorial prayer offered by my dear colleague cantor Azi Schwartz. Sublime as his voice is, it was an experience like no other to hear the voices of other Jews and non-Jews join in as he concluded with a warm rendition of “Oseh Shalom.”

There was the “bro-hug” with my new friend and colleague Imam Khalid Latif before our shared invocation. There was the green room where representatives of world religions sat together linked by a common search for an iPhone charger and Wi-Fi password. There was the text my urologist older brother sent to my whole family: “See that rabbi standing there next to the pope? His brother … he’s a doctor.” And then of course, my mother in Los Angeles, who has spoken to everyone from the kosher butcher to the attendant at the dry cleaners about her son and the pope. For a glorious and fleeting moment, all my failings as a son have given way to a tsunami of kvelling that I hope will last, please God, just a few more days.

Beyond my own experiences, the pope’s visit to New York bears the potential to be a springboard to a much larger conversation. I am unabashed in my belief that Pope Francis is perhaps the most exciting religious leader of our time. A pope whose model of leadership is relevant not just for the Catholic community, not just for interfaith relations, but for every faith leader to consider in his or her own work. So before the buzz of his stateside visit subsides, it is worth considering what the enduring lessons of his papacy may be for us.

First and foremost, in a relatively brief time Pope Francis has instituted a dramatic change in the tone and temperament of the church.

What is interesting is that to the best of my knowledge there have been no dramatic doctrinal changes, but rather a refreshing new face presented to the world. It was not so long ago that the Catholic conversation appeared to be driven by prohibitions regarding abortion and homosexuality, not to mention internal scandals. Consider how great a distance the church has traveled from Pope Benedict’s warnings regarding “the dictatorship of relativism” to Pope Francis, whose response when asked about his views on gay priests was “who am I to judge?” Religious leaders understand that style is substance, and the Catholic Church is no longer leading with its chin.

It is not so difficult to think of pockets of Jewish religious leadership who would do well to adopt Pope Francis’ posture.

Respecting tradition and “menschlichkeit” are not mutually exclusive propositions. It is this posture of inclusion, not exclusion, that should guide our efforts as a Jewish community.

Aside from the change of tone, what is most refreshing about Pope Francis is the inability of the media or political establishment to fit him into any ideological box.

He preaches on family values and environmentalism. He speaks to an ethic of personal responsibility and social welfare. He is tough on abortion and same-sex marriage, and he is also an unflinching advocate for immigrant rights. This pope isn’t really a conservative or liberal — his leanings don’t fit tidily into any chart — and I think that is great. Pope Francis is a powerful counterargument to the polarized debates of our time.

His model suggests that ideological consistency has nothing to do with political affiliation, but is rather a litmus test of a much higher integrity.

One of the many ills afflicting us this political season is the fact that a candidate cannot be, for instance, a social liberal and a fiscal conservative, or the other way around. We don’t permit complexity in our leaders, but because this pope isn’t running for office, he is able to be complex. God is neither conservative nor liberal, Republican nor Democrat, hawk nor dove. This pope gets that and it is a model well worth considering.

In each case, it is the abiding belief that every human being is created in the infinite dignity of God’s image that demands that we care for our world and each other. No matter what our theological differences may be, in insisting on a rigid uniformity of belief we diminish the dignity of another person’s right to their beliefs. As stewards of God’s creation, we are obligated to care for our “common home” in a manner that speaks not only to our present needs, but to those of the unborn generations to come. So, too, in our attention to the plight of the poor and the refugee, our obligations are founded not merely on the golden rule of “do unto others,” but also on an awareness, as Pope Francis said to Congress, that as a nation of immigrants, America must be attentive to the present humanitarian crisis engulfing Europe. This is a message that the Jewish community knows well. It is our awareness that we were once strangers in a strange land that calls us to care for the condition of the strangers in our own midst and era. As a Jewish community, we would do well to study the contours of Pope Francis’ vision to find points of common cause and collaboration.

The very fact that Pope Francis has insisted on speaking to the issues of the day is a model for us all. His words and actions remind us that the point of religion is not descriptive, to describe the world as it is, but rather prescriptive, to describe the world as it ought to be. In his insistence that faith be an instrument of peace, not violence, in his insistence that the church be “a field hospital after battle,” healing wounds and warming hearts, Pope Francis is reinvigorating the prophetic voice of faith in our communal discourse. And he has done so with a deep and abiding humility. Having sat next to him, I can report his demeanor is not overbearing.

Whatever his rank may be, there is a humanity to the man, a humanity that strikes me as being deeply concerned with the condition not just of every human being, but of a common humanity.

Pope Francis has given all people of faith a model that we can aspire to emulate.

My warmest memory of all from the 9/11 gathering relates not directly to the pope, but to my dear friend Cardinal Timothy M. Dolan of New York. The formal part of the program had ended, and as participants were greeting each other, the pope stood for pictures with assorted dignitaries. Off to the side, Cardinal Dolan and I greeted each other warmly, and he asked, “Elliot, aren’t your children here?” When I signaled to him where they were sitting, Cardinal Dolan insisted, “Well bring them up to the stage, they should be up here!” I turned around, caught my children’s attention, waved them over, and to make a long story short, was able to give them each the gift of a handshake and smile from the pope that they will never forget.

It is this story, more than any other, to which I have returned since the event concluded.

That in the split-second of a chaotic recessional Cardinal Dolan saw me and didn’t see a rabbi, or even necessarily a Jew, but friend and a dad who probably wanted what every dad wants: to make his children happy. It was a gesture of supreme “menschlichkeit,” and it speaks volumes of Cardinal Dolan and the church he represents. If each one of us had it within ourselves to recognize each other not for our titles, stature, or faith, but for the human beings we are, and then performed acts of friendship and service to validate that common humanity, just think how much better off this world would be. I am grateful to Cardinal Dolan for many things, but it is that one gesture as much as anything, exemplifying the spirit of his ministry, that is worthy of emulation. May we all similarly seek, with humanity and humility, to exemplify such a spirit in our own lives, and may the warm glow of Pope Francis’ visit continue to be an inspiration for many years to come.

The views or positions presented in this or any guest editorial are those of the individual publication or author and do not necessarily represent the views of CatholicPhilly.com, Catholic News Service or the U.S. Conference of Catholic Bishops.

NEXT: Lesson for synod seen in joy evident at World Meeting of Families