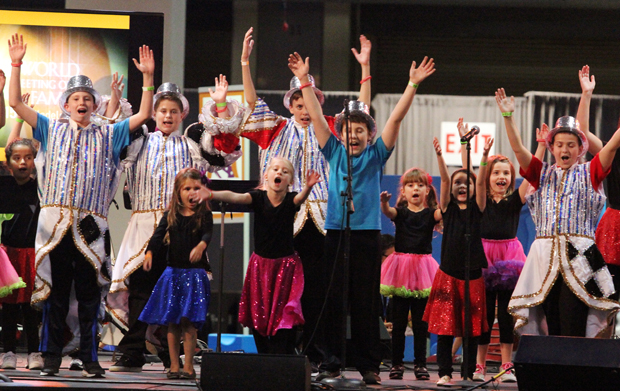 Children lead others in a singing activity at the Youth Congress, during the World Meeting of Families Sept. 22 at the Pennsylvania Convention Center. (Photo by Sarah Webb)

The Pennsylvania Convention Center was brimming with energy during the World Meeting of Families Congress last week — and not just on the main floor where adult participants were attending inspirational presentations and visiting the hundreds of exhibit booths of Catholic organizations in the Philadelphia area and beyond.

Downstairs young people gathered to enjoy a plethora of fun activities and educational presentations. With a main stage in the center of the room for lively performances by Christian music artists such as Bethany Music Ministry, Steve Angrisano and Jesse Manibusan, activities around the perimeter offered the youths opportunities to help with service projects, learn about their faith, and even shoot baskets with seminarians from St. Charles Borromeo Seminary.

(See a photo gallery of the youth activities here.)

At the Shooting Hoops with the Seminarians activity area, Father Stephen DeLacy, vocation director for the Archdiocese of Philadelphia, said the seminarians not only had the chance to play basketball with the teenagers but also share their vocation stories with them.

Playing basketball helps teens to “see the seminarians as normal guys,” he noted. “It’s a very compelling connection that can help the young men in particular put themselves in the shoes of the seminarians” and consider whether God may be calling them to the priesthood.

“Everyone seems to be having a great time, and thank God nobody has gotten hurt,” Father DeLacy added.

In the Trivia: Catechism Quest area, teens were busy pondering questions about the Catechism of the Catholic Church.

One teen, Jonathan DuBois from Steubenville, Ohio, liked the trivia game so much he proposed that if the teens answered 5,000 questions correctly that $500 be donated to Catholic Relief Services (CRS). Ascension Press, based in West Chester, agreed to make the donation if the goal was reached.

Sue Matour, who helped plan the Youth Congress, said more than 5,600 questions were answered, and Matt Pinto, president and founder of Ascension Press, presented a ceremonial check for CRS at the Congress.

DuBois said he enjoyed participating in the Youth Congress. “I’ve heard some great talks and had a lot of fun meeting new people,” he added.

He was planning to attend the papal Mass on Sept. 27 with his family, and said he is impressed with Pope Francis. “He’s down to earth, with the people,” DuBois said. “He is getting people’s attention.”

Anastasia Joanis, a freshman at Trivium School in Massachusetts, found the Youth Congress to be inspirational.

“I want to go home and evangelize,” she said. “I’m having a great time meeting so many like-minded people, and it gives me so much hope.”

Joanis was also looking forward to attending the papal Mass on the parkway. “I love Pope Francis,” she said. “I think he’s very inspiring to people, even those who aren’t Catholic, (because they) see his great joy and his love for people.”

In the World Mission Rosaries booth, Ana Healy, an eighth grader from Ontario, Canada, was busy stringing beads on a rosary. She said the best part of the Youth Congress was the service activities and meeting new people.

“Everyone has been friendly and nice to me, and I like being able to help people in need,” Healy said. “It’s been a really positive experience.”

She was excited about attending the Festival of Families and seeing the pope. “The pope is very nice to families,” Healy said. “I think it’s really cool that he’s very family friendly and kind to children.”

Riley Powers from St. Thomas of Villanova Parish in Villanova is grateful for the opportunity to participate in the World Meeting of Families and attend the papal events in Philadelphia.

“I think it’s such an amazing thing to say I was a part of this amazing conference and the pope’s visit to Philadelphia,” Powers said. “This is something I will remember for the rest of my life.”

NEXT: Expert: Healing possible for victims of domestic violence, and perps