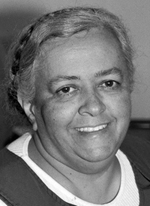 Sister of St. Francis Francis Carmel Gonzon, 71, died Oct. 14 in Assisi House, Aston, where she spent 19 years serving in prayer ministry. She had been a professed member of the Sisters of St. Francis of Philadelphia for 49 years.

Sister Francis Carmel (Mary Dominica Gonzon) was born in Wilmington, Del., where she was a member of St. Peter Parish in New Castle and a graduate of St. Peter High School. She entered the congregation in 1963 and professed her first vows in 1966. She earned a bachelor’s degree in early childhood education from Towson University and ministered in elementary education, primarily as a first grade teacher.

Sister Francis Carmel began her years in ministry at St. Clement School in Rosedale, Md., and continued teaching in the Archdiocese of Baltimore at St. Elizabeth School, St. Joseph School in Fullerton, and St. Peter Claver School. She served in the Archdiocese for 11 years.

Sister Francis Carmel also ministered for nine years in the Diocese of Wilmington where she taught at Immaculate Conception School in Elkton, Del. She was later missioned at Our Lady of Fatima Convent in New Castle.

Her funeral Mass was celebrated Oct. 20 at Assisi House in Aston. Sister Francis Carmel is survived by two brothers, nieces and nephews, and her Franciscan family.

NEXT: Franciscan sister and Seattle native dies at 93