No quick solutions to refugee crisis 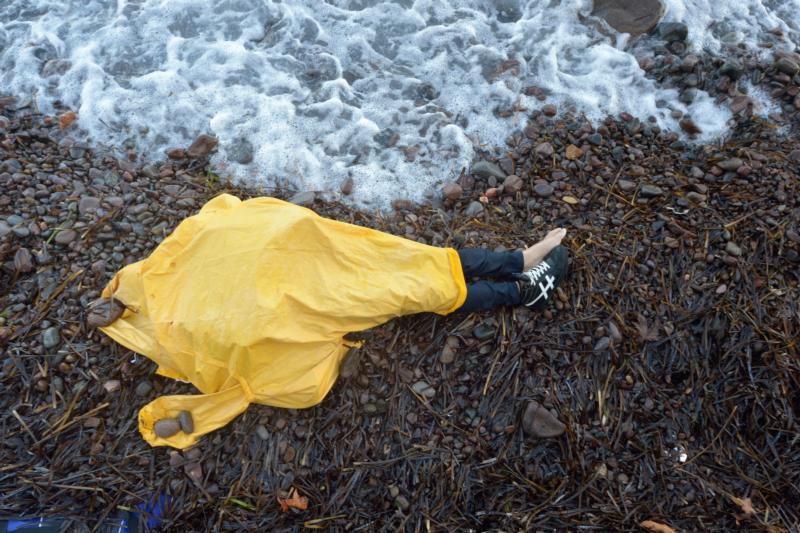 The body of a refugee child lies on a beach on the Greek island of Lesbos on Nov. 1. The body appeared to be that of an Afghan boy of about 8 years of age. Thousands of refugees have died this year attempting to cross the Aegean Sea from Turkey to Greece. Fleeing violence in Syria, Iraq, Afghanistan and elsewhere, most are on their way to Western Europe. (CNS photo/Paul Jeffrey)

The following is an unsigned editorial titled “No quick solutions to refugee crisis,” which appeared in the Oct. 29 issue of Catholic New York, the newspaper of the Archdiocese of New York.

On Oct. 25, the leaders of Greece and other countries along the so-called “migrant trail” into Europe agreed to set up holding camps for up to 100,000 people seeking asylum from war or unrest in their homelands.

The move could go a long way toward easing Europe’s biggest refugee crisis since the end of World War II, a crisis the European Union has struggled with for months as the member countries try to come up with a unified response.

We hope this program has a better outcome than a resettlement plan announced five months ago, which has relocated fewer than 100 refugees held in Greece and Italy despite a stated goal of relocating more than 40,000 of them to other countries. And the numbers — from Syria, Afghanistan and elsewhere — keep piling up.

In late October, an escalation of fighting in Syria resulted in more than 9,000 people a day crossing into Greece, the first stop on a journey that many hope will ultimately take them to Germany or another affluent country perceived as welcoming.

Pope Francis has been one of the strongest voices in the international community urging a broad and charitable response to the crisis, even appealing to every Catholic parish and community in Europe to house a refugee family. The Gospel calls on Christians “to be ‘neighbors’ of the smallest and most abandoned,” he said Sept. 6 in an address in St. Peter’s Square.

Setting an example, he announced that two small parishes in the Vatican would take in two families of refugees. Sean Callahan, chief operating officer of Catholic Relief Services, which has been working throughout the Balkans to provide emergency relief there, said in testimony before a U.S. congressional committee that the pope’s words and actions remind us “of our moral obligation to help the stranger.”

Of course, as U.N. General Assembly President Mogens Lykketoft pointed out at a recent prayer service at Holy Family Church in Manhattan, the migrant crisis that “a divided and unprepared” Europe is facing will not be solved without an end to the wars and crises that are the cause of the refugees’ suffering.

And that solution, unfortunately, is not around the corner.

In the meantime, Callahan, whose agency has helped more than 800,000 people since the start of the Syrian crisis, urged Congress to commit an additional $1 billion to refugee aid and resettlement.

He also urged the U.S. government to support the integration of Syrian refugees in neighboring countries; directly fund international private organizations that can get assistance on the ground faster and navigate potential governmental barriers; fund humanitarian and development assistance in refugee host countries such as Lebanon, Jordan and Turkey; increase funding for emergency education and other protection efforts for children; and commit to high-level negotiations toward a political solution to the conflict in Syria.

“The exodus to Europe cries out that so much more must be done,” he said.

And our prayers and support are with those world leaders and workers on the ground who are struggling to find the right way.

The views or positions presented in this or any guest editorial are those of the individual publication or author and do not necessarily represent the views of CatholicPhilly.com, Catholic News Service or the U.S. Conference of Catholic Bishops.

PREVIOUS: As suicide grows, there’s no better time to stand up for life

NEXT: Thank God for his presence in bounty of life, and in its darkness