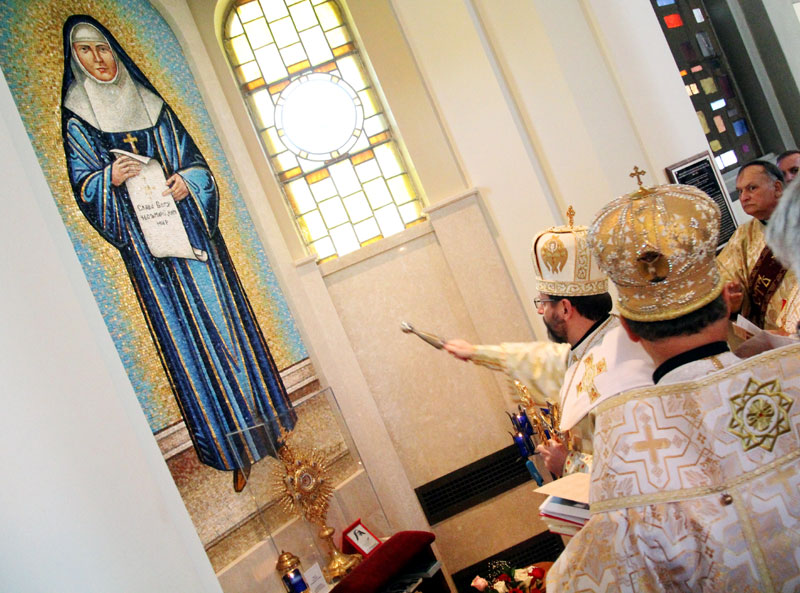 His Beatitude, Ukrainian Major Archbishop Sviatoslav Shevchuk, blesses one of two new mosaics Nov. 15 at the Ukrainian Cathedral of the Immaculate Conception in Philadelphia. 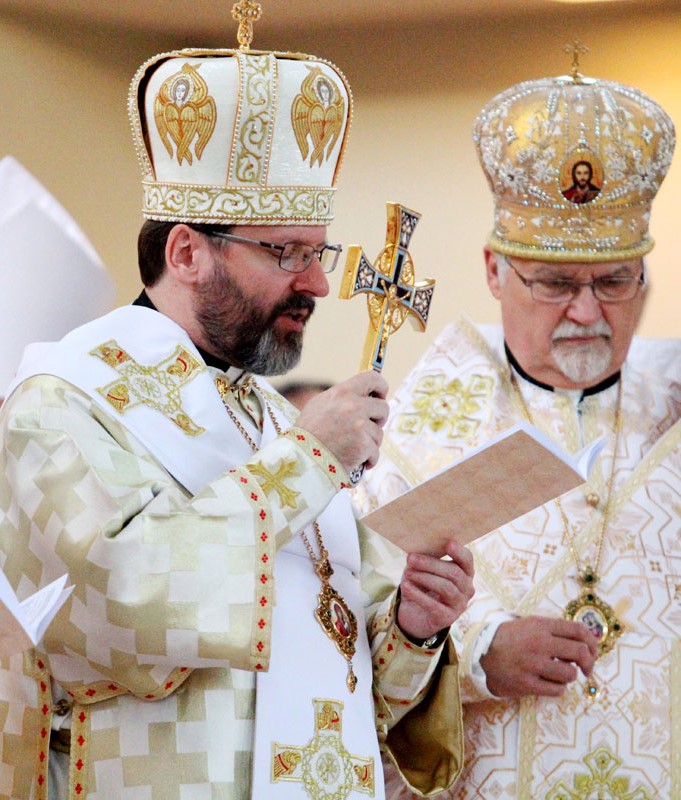 In 2009, Ukrainian Father Sviatoslav Shevchuk, a priest of the Ukrainian Catholic Church, was named a bishop and sent to Buenos Aires, Argentina, as an auxiliary bishop and administrator of the Eparchy of Santa Maria.

At that time he was just 38, the youngest Catholic bishop in the world.

Just two years later, despite his youth, his brother Ukrainian bishops meeting for a five-day synod in Lviv elected him major archbishop of Kiev-Halych, the head of the entire Ukrainian Catholic Church. The election was ratified by Pope Benedict XVI.

During his brief administration in Buenos Aires, his mentor was Cardinal Jorge Bergoglio, then the archbishop of Buenos Aires, now Pope Francis. The two became friends.

“I think Pope Francis has deep religious spirituality,” Major Archbishop Shevchuk observed during a Nov. 13-15 visit to Philadelphia. “His special gift is to discern and appreciate each gift from the Holy Spirit, and he was an outstanding father and adviser to me. He introduced me to the council of bishops in Argentina and helped me with my orientation.”

“He said to me, ‘Did you forget your Spanish?’ So we talked in Spanish,” Major Archbishop Shevchuk said.

While in Philadelphia, Major Archbishop Shevchuk was the main celebrant of a Divine Liturgy honoring consecrated life Nov. 15 at the Ukrainian Catholic Cathedral of the Immaculate Conception.

(See a photo gallery of the Divine Liturgy here.)

During his homily, based on the Gospel reading from St. Luke that includes the parable of the good Samaritan, Major Archbishop Shevchuk reminded the congregation that God himself becomes not only our neighbor, but he is with us, within us.

Quoting St. Augustine, he said of God, “All the while you were more inside me than my most in most part; you were higher than my highest powers. … God is closer to us than we are to ourselves.”

To the assembled men and women religious who renewed their vows during the Divine Liturgy, Archbishop Major Shevchuk said the entire Ukrainian Catholic Church is grateful “to you, brothers and sisters in Christ, who gave all your heart, and your soul, all your strength and all your mind to service and love for God. Thank you for your service to the church, especially here in the United States. … And I call upon everyone here present to please learn how to love God and neighbor from our sisters here present.”

After the recessional, the entire congregation carrying lit candles gathered outside on the cathedral grounds where Major Archbishop Shevchuk blessed a new bell tower which houses the “Stefan” bell from the original cathedral which was cast in 1919 in Baltimore. The congregation then prayed for Ukraine.

Over 1,200 faithful from parishes in eastern Pennsylvania, New Jersey, Delaware, Washington and Virginia attended the Divine Liturgy, which was broadcast live by the Eternal World Television Network.

At the end of the liturgy, Major Archbishop Shevchuk blessed new mosaics honoring Blessed Josaphata Hordashevska, foundress of the Sisters Servants of Mary Immaculate and Major Archbishop Andrey Sheptytsky of the Ukrainian Catholic Church, who died in a Soviet prison in 1944. In July, Pope Francis signed a decree recognizing his heroic virtues and declaring him venerable.

The primary reason for Major Archbishop Shevchuk’s visit to the U.S. was to participate in the unveiling in Washington of the Holodomor-Forced Famine Monument, which honors the memory of millions of Ukrainians who starved to death in 1932-33 during forced collectivization instigated by the Stalin regime.

“We call it genocide,” he said. “In Ukrainian territory alone according to studies at least 5 million were killed.”

On Nov. 7 he blessed the monument, which was authorized by Congress in 2006.

Ukraine, which was ruled mostly by Russia and other neighboring countries for centuries, regained full independence in 1991 after the collapse of the Soviet Union but relations between the Russian Federation and Ukraine deteriorated with the annexation of Crimea by Russia and incursions in other nearby Ukrainian territory in 2014.

“The desire of the Ukrainian nation is not to move back to the Soviet Union but forward to democracy to autonomy,” Major Archbishop Shevchuk said. “Right now there is a fragile cease-fire but we are concerned about re-escalation.”

While in Washington, he and other Ukrainian religious leaders representing the Orthodox, Jewish, Lutheran, Muslim and evangelical Christian faiths, among others, held a news conference Nov. 9 calling on President Barack Obama and Congress to greatly increase the level of humanitarian aid for those suffering in the midst of the ongoing conflict in Ukraine, especially as winter approaches. The group also met with officials of the Obama administration at the White House to push for increased aid.

Although most other believers are Orthodox Christians along with Protestant, Jewish and Muslim communities, “Our (All-Ukrainian) Council of the Churches and Religious Organizations is our most powerful NGO, representing 85 percent of the people,” Major Archbishop Shevchuk said. “The council enables us not only to listen to each other but to solve our problems. We not only coexist, we cooperate.”

To be part of the Ukrainian nation, one does not have to be ethnically Ukrainian, Major Archbishop Shevchuk explained, pointing to the large number of Poles, Jews, Russians and other nationalities, with a large part of the army being Russian speakers. “We are a free people, a country with European values and respect for human dignity, which lays the foundation to the nation.”

Just as Ukraine is multi-ethnic, so too is the Ukrainian Catholic Church, which during communist rule was essentially an underground church, according to the major archbishop.

“We are a global church,” he said. “We are in the U.S., Canada, Argentina, Brazil, Australia, Western Europe, Siberia and even China. We pray in different languages. We are open to sharing our Eastern Catholic traditions, our spirituality, our liturgy with all.”

Although Ukrainian Catholics are a minority both in the country of their origin and around the world, including the United States, the aim is always communion not conformity.

“We always learn to think as a minority, but our authority goes beyond being a small community,” Major Archbishop Shevchuk said. “We learn how to overcome our limits, to be flexible, to present our treasures in a practical way so that people will appreciate them.”

In his visit to the United States and the various Ukrainian Catholic communities, Major Archbishop Shevchuk most desired to bring attention to the current situation in Ukraine. “We do need the help of the international community, not only to stop a war but to help those who have been injured by war,” he said. “I especially want to thank all Catholics in America who participate in the collection for Eastern churches. Right now, that is vital.”