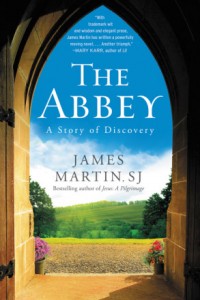 “The Abbey” is a novel written by Jesuit Father James Martin.

That Jesuit Father Jim Martin is one of the most popular and prolific Catholic writers around is no secret. He has for many years been editor-at-large of the Jesuit weekly magazine America, whose West 56th Street offices are located directly across town from Catholic New York’s offices in the New York Catholic Center.

During a recent phone conversation, I told him he is probably the hardest-working writer in the Catholic press, a remark he kiddingly offered to use as a future book blurb. With nonfiction books such as “The Jesuit Guide to (Almost) Everything,” “Between Heaven and Mirth” and “Jesus: A Pilgrimage” already to his credit, you wouldn’t have to go far to finish making the case.

A good place to start would be his latest published work, a novel called “The Abbey” that I read over Thanksgiving weekend. The first fictional work in the Jesuit’s repertoire stacks up very well, indeed. Though definitely not autobiographical, it combines some familiar themes and landmarks from Father Martin’s real life in a well-written, engaging story that had its beginnings in a dream.

“The Abbey” of the book’s title is the fictional SS. Philip and James Trappist Monastery outside Philadelphia, which happens to be where Father Martin grew up. He has also spent a good deal of time over the years at St. Joseph’s Abbey in Spencer, Mass., which he conceded was a basis for its fictional counterpart.

The street where Anne, the main character, lives is modeled after the one where Father Martin, now 54, was raised. Her tenant, Mark, who works at the abbey, lives a couple of houses down the block.

The opening scene, where a baseball crashes through Mark’s window, was straight out of Father Martin’s dream. The priest awoke with a start, saying to himself, “Hey, that’s a pretty good story,” and started to write it all down. At first, he thought he might have an e-book in the making. Then his publishers at HarperOne said they’d be delighted to publish a hardcover version, which they did in October.

The story centers on Anne, who grieves the loss of her teenage son, Jeremiah, killed three years earlier when he was hit by a car while riding his bike with friends.

You’ll have to read the 212-page book for the details, but when I suggested to Father Martin that his treatment of religious life as experienced by Trappist monks made this a perfect book for the Year of Consecrated Life, he did me one better by saying that it would be just as appropriate for the just-beginning Year of Mercy convoked by Pope Francis, because of the compassionate spiritual counseling Anne receives from Father Paul, the abbot of the monastery.

I told Father Martin that I really liked the passage when Father Paul explained that he “liked helping people who didn’t have as many invitations to see God in their lives” as the monks did. He believed that mothers and fathers, and doctors and lawyers, and teachers and janitors, a lot of them anyway, were holier than monks. “They had to make room for God in a world that often crowded out God,” Father Paul thought.

By the time he had finished writing, Father Martin said he loved the characters he had created. He said Anne’s questions about the spiritual life, and her relationship with God, which was affected by the anger she felt over the loss of her son, are experiences based on real life. “I tried to incorporate some of the struggles a lot of readers would have,” he said.

Setting out to write a book that would help people feel more comfortable about their relationship with God, Father Martin found that telling the stories of his characters’ lives was an effective way to accomplish that. “I had a great time doing that, being with these three characters, given to me by God in a dream,” he said.

PREVIOUS: Good decisions can be made at any age

NEXT: New opportunities for religious to teach in urban schools as part of formation process