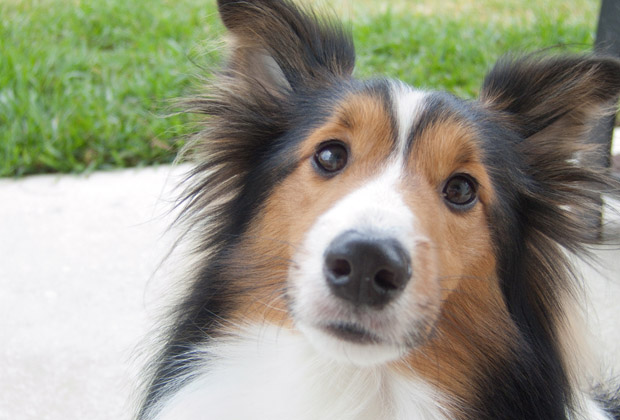 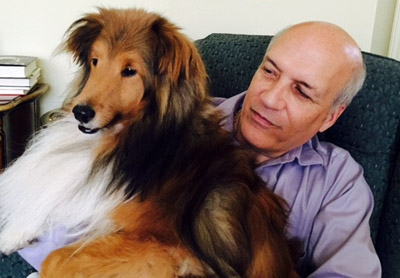 Steve Molden is glad his 4-year-old sheltie, Brodie, is safe again at home after becoming lost for days, then found at midnight Mass at St. Mark Church, Bristol, on Christmas Eve. (Photo by Barry Fisher)

Several residents of Bristol Borough have a different kind of Christmas story to tell, one whose simplicity was as much a gift, they said, as spiritual renewal and wrapped presents.

There were heavy hearts in town on Christmas Eve, all because of a little lost dog. Brodie, a 4-year-old sheltie, whose family brought him and his sibling, Lacie, up from North Carolina to visit for the holidays, had run off days before.

Steve and Kathy Molden, and their son, Craig, were visiting Steve’s father, George Molden Jr., at his home in The Villas at Riverview, an over-55 community nestled on the banks of the Delaware River. The Moldens thought the dogs were playing in the garage, but when they checked, both were gone.

Lacie was found early on wandering near the development’s entrance, but no one knew which direction Brodie took on that rainy, fog-shrouded night. The dog’s loss led to hours of searching, stopping strangers on the street and calling on neighbors for help. Craig Molden had posted the dog’s description on websites dedicated to finding lost pets.

Hours and days passed. Hope was diminishing, spirits were low.

“We were devastated. We had our Christmas Eve dinner, but we were teary-eyed,” Kathy Molden said.

The missing Brodie, whose dental under bite freezes his snout in a permanent “smile,” stole hearts, especially among the Facebook crowd who manned their keyboards to tap out his be-on-the-lookout information.

For two days, phone lines buzzed around town with one question: “Did they find the dog yet?”

Animal Control Officer Bill Palmer, a veteran of looking for lost pets, said he couldn’t sleep so he patrolled around town until 1 a.m. that first night then joined a chorus of others who prayed for what they hoped would be a Christmas “miracle.”

“I was driving around in the dark and I saw a church. I looked up at the cross on top and said, ‘C’mon, God,’ help me find the dog.”

Debby Gentile, who had been walking with a friend on Spurline Park was approached by Kathy Molden the first night of the search. She and her friend finished their trek calling and whistling, hoping to lure Brodie to them. Gentile said she also resorted to praying that Brodie would be found.

Another borough resident, Mary Delano, also prayed to plead for the dog’s return.

Christmas morning dawned and the Moldens went to a local diner for breakfast, discussing how hard it was going to be to go home without Brodie. They were unaware that the Bristol Borough police were trying to reach them to let them know that their dog was coming home.

Hours before, Brodie had found his way to midnight Mass at St. Mark Church. A member of the congregation spotted him and called police. The Moldens are firm in their belief that it was no accident that Brodie turned up at a church on Christmas morning.

It could have been a coincidence, but many believe it was nothing short of an answer to prayer. As 13-year-old Tara Girton exclaimed, “Baby Jesus found Brodie.”