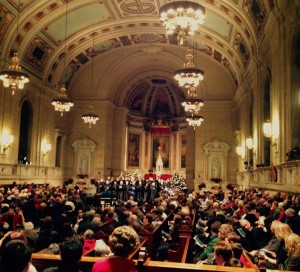 In the afternoon, visitors took hour-long tours, with seminarians as their guides, through the historic grounds, where a number of Christmas Nativity scenes were on display – including the famed Wanamaker crèche – along with mementos and photographs from the recent papal visit to Philadelphia.

The Christmas concert, titled “Joy to the World! The Lord is Come!”, was presented in the Chapel of St. Martin of Tours, beautifully decked with poinsettias and trees. Theology III student Matthew Biedrzycki delivered opening remarks which was followed by a reading from the Gospel of Luke. The seminarians then processed in to a rousing “O Come, All Ye Faithful,” with the audience singing along with them.

According to Father Patrick Brady, dean of the School of Diaconal Formation and chair of the Department of Sacred Scripture, St. Martin’s Chapel has a capacity of about 600, and it was packed with not only seminarians’ families, but many parishioners from around the Archdiocese and neighbors who live near St. Charles.

Rudolph A. Lucente, the seminary’s director of sacred music, noted that assembling a diverse program for the concert was challenging, but students offered song suggestions that formed the bulk of the revue.

“Everyone in the seminary comes from a different background, so there’s no unifying style,” he said. “Some of the students come from parishes with more modern music, others from more classical traditions.” Alongside a number of medieval and early modern chorale pieces – the 16th century “Gaudete” choral piece popular with schola groups and the Old Basque carol “The Angel Gabriel” (more familiarly, “Gabriel’s Message”) – were songs originally performed by modern Christian rock band Mercy Me and the Schubert “Ave Maria.”

The largest group of seminarians to perform was the seminary choir, with several performances by smaller groups such as the Theology Schola, a six-man group, or vocal ensembles with accompaniment. There were also instrumental performances – most notably by the rector of the seminary, Auxiliary Bishop Timothy Senior, who accompanied violinist and student Matthew Brody on the piano to Charles Gounod’s “Chant Évangélique” from that composer’s Jesus of Nazareth motet cycle, and Chopin’s “Nocturne in E flat” from Opus 55, No. 2.

The concert also highlighted performances by Michael Stairs, the seminary’s first artist in residence and an organist for the Philadelphia Orchestra since 1985. Lucente also recognized the efforts of Brandon Artman, a seminarian and transitional deacon who previously served as organist and director of music for St. Matthias Parish in Bala Cynwyd, for keeping the music program alive at St. Charles during the search for a new music director.

During intermission, the seminarians took up a goodwill collection, and the money will be donated to Catholic Relief Service for refugees from the conflict in Syria.

Before the recessional, a sing-along of “Silent Night,” Bishop Senior sang the opening bars of Irving Berlin’s “White Christmas,” replacing the introductory lyrics, which allude to “Beverly Hills, L.A.” with “Overbrook, PA,” to much audience laughter, and then he led the audience in song.

NEXT: The relevance of ‘Gaudium et spes’ continues 50 years later