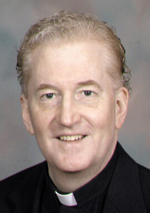 He was born March 23, 1951, the son of the late Gerald C. and Alice K. (Marks) Van Thuyne in St. Helena Parish, for which he had a lasting affection. He attended St. Helena School and Cardinal Dougherty High School before entering St. Charles Borromeo Seminary.

Ordained May 21, 1977 by Cardinal John Krol at the Cathedral Basilica of SS. Peter and Paul, his first assignment was as parochial vicar at St. Edmond Parish in Philadelphia. He also served at Holy Child, Philadelphia; St. Patrick, Kennett Square; Nativity B.V.M., Philadelphia; St. Anthony of Padua, Ambler; St. Luke the Evangelist, Glenside; St. Clement, Philadelphia; and St. Ephrem, Bensalem, as well as pastor at St. Francis Xavier. Father Van Thuyne, who had health issues, including head trauma from a fall, was not in active ministry in recent years.

“He just loved helping people,” commented Msgr. John Conway, a St. Charles classmate. “I notice even when you go to the website for the funeral director where his obituary is posted people are saying, ‘You were there for me and my family in time of need.’ He just thrived on that. He wanted to be there for people and got very much involved in their lives.”

“Dennis loved being a priest,” said Father Paul Kennedy, another St. Charles classmate. “While he was active as a priest he did very good things and was very successful in the parishes he was assigned to.”

After his injury, while he could not do public ministry, “he was still devoted to his prayer life and helping other people,” Father Kennedy said. “He would come to all of our reunions. It was just a sad thing that happened. He was always a good and devoted priest.”
A funeral Mass for Father VanThuyne was held Dec. 4 at St. Helena Church. The principal celebrant will be Father Kennedy. Concelebrants include Msgr. Joseph Trinh and Msgr. Conway, who will be the homilist.

Father Van Thuyne is survived by his brothers Joseph (Diana), Michael (Phyllis, Paul (Tina) and sister, Maureen Gunn (Robert) and nieces and nephews.
Interment will be at Holy Sepulchre Cemetery.