Church’s forgiveness must be as limitless as God’s mercy, Pope Francis says 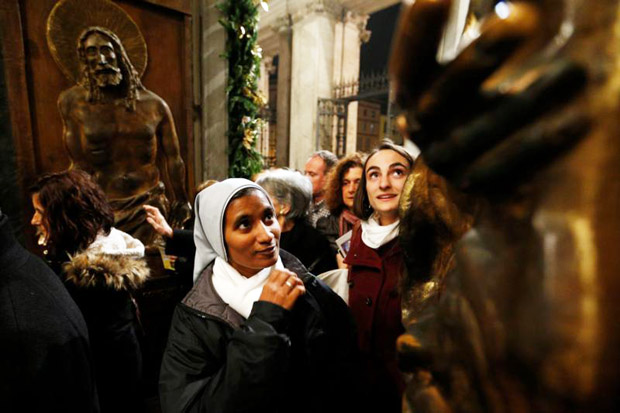 People pass through the Holy Door of the Basilica of St. Mary Major after its opening by Pope Francis in Rome Jan. 1, 2016. The Holy Doors of Rome's four major basilicas are now open. (CNS photo/Paul Haring) 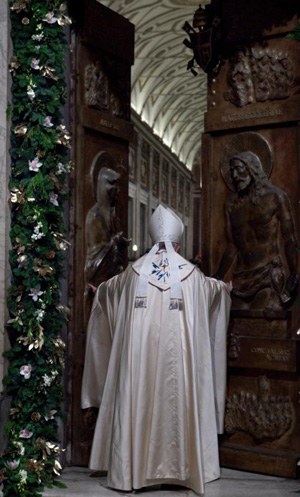 “The church’s forgiveness must be every bit as broad as that offered by Jesus on the cross and by Mary at his feet. There is no other way,” he said after opening the Holy Door of the Basilica of St. Mary Major Jan. 1, the feast of Mary, Mother of God, and the World Day of Prayer for Peace.

On the first day of the new year, Pope Francis opened the last holy door in Rome as part of the extraordinary Holy Year of Mercy.

“The door we have opened is, in fact, a Door of Mercy,” he said in his homily, referring to the Roman basilica’s large bronze doors depicting Mary presenting her resurrected son, Jesus.

“Those who cross its threshold are called to enter into the merciful love of the father with complete trust and freedom from fear; they can leave this basilica knowing with certainty that Mary is ever at their side,” especially during times of trouble and sorrow, he said.

At the church dedicated to Mary and on her feast day as Mother of God, the pope explained how Mary is the mother of mercy because she bore “the very face of divine mercy,” the son of God “made incarnate for our salvation.”

“Mary is an icon of how the church must offer forgiveness to those who seek it. The mother of forgiveness teaches the church that the forgiveness granted on Golgotha knows no limits. Neither the law with its quibbles, nor the wisdom of this world with its distinctions, can hold it back,” he said.

Mary offers the world Jesus, who in turn, offers that forgiveness which “renews life, enables us once more to do God’s will and fills us with true happiness,” the pope said.

“The power of forgiveness is the true antidote to the sadness caused by resentment and vengeance,” which do nothing but “trouble the mind and wound the heart, robbing it of rest and peace.”

After the Mass, the pope symbolically opened another door, this time the large iron gates in front of a smaller chapel housing a Marian icon he is particularly devoted to — the “Salus Populi Romani” (health of the Roman people). 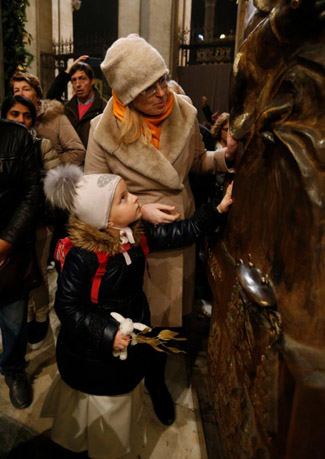 People pass through the Holy Door of the Basilica of St. Mary Major after its opening by Pope Francis in Rome Jan. 1, 2016. (CNS photo/Paul Haring)

A deacon told the congregation to pray together with the Holy Father and ask Mary “to take us by the hand and lead us to the Lord Jesus.” After the pope pushed open the gates, he brought up a small floral arrangement of white lilies to the altar and prayed in silence before the icon.

Earlier in the day, the pope further marked the World Day of Peace in his noon Angelus address, when he said peace must not only be cultivated but also conquered in a spiritual fight being waged by war and indifference.

Christians are called at the beginning of the new year to open their hearts and “reawaken the attention to one’s neighbor, to those who are closest,” he said.

“War is not the only enemy of peace, but also indifference, which makes us think only of ourselves and creates barriers, suspicions, fears and closures. These are the enemies of peace,” the pope said.

Recalling the church’s celebration of the solemnity of Mary, Mother of God, the pope asked for her intercession so that the faithful may imitate her in guarding and meditating on all that happens in their hearts.

Mary “preserves the joys and loosens the knots of our lives, taking them to the Lord,” he said.

The pope also celebrated Mass in St. Peter’s Basilica in the morning to mark the Marian feast day.

God is present in human history, he said, despite signs and events that “tend to make us think instead that he is absent.”

“Sometimes we ask ourselves how it is possible that human injustice persists unabated, and that the arrogance of the powerful continues to demean the weak, relegating them to the most squalid outskirts of our world,” he said.

“How can the fullness of time have come when we are witnessing hordes of men, women and children fleeing war, hunger and persecution, ready to risk their lives simply to encounter respect for their fundamental rights?”

Pope Francis went on to say that notwithstanding those events, the “swollen torrent” of misery is powerless “before the ocean of mercy which floods our world.” The grace of Christ “brings our hope of salvation to fulfillment” and gives Christians the strength to build a more “just and fraternal world.”

“Where philosophical reason and political negotiation cannot arrive, there the power of faith, which brings the grace of Christ’s Gospel, can arrive, opening ever new pathways to reason and to negotiation,” he said.

In an Angelus address Jan. 3, the pope reminded visitors in St. Peter’s Square to keep a small book of the Gospels with them at all times and read at least one verse each day “in order to know Jesus better, to open our heart up wide to Jesus” and share him with others.

The pope warned against “the mystery of evil which threatens our lives, too, and demands our vigilance and attention so it not prevail.”

“Woe to us if we let in” sin which always lies in wait “at the door,” he said.

He also asked people take on the title of his World Day of Peace message, “Overcome Indifference and Win Peace,” like a New Year’s resolution to “put into practice” with God’s help. 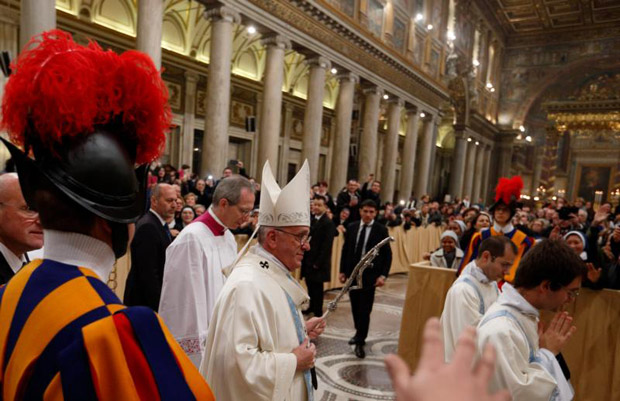 PREVIOUS: In the story of the Epiphany, who is seeking whom?