Jesus, our Good Shepherd, leads us through dangers to eternal life

Fighting words from an Irish saint 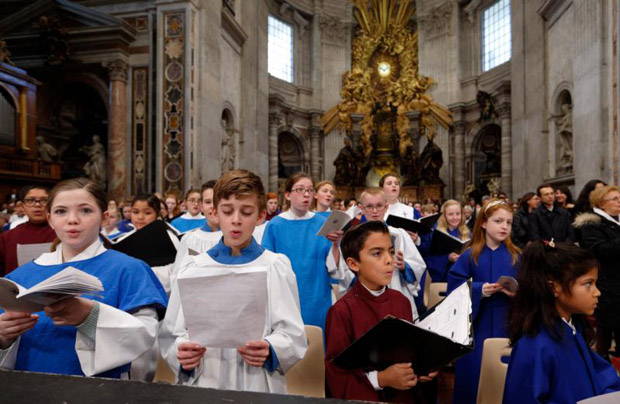 The children’s choir from Most Pure Heart of Mary Church in Topeka, Kan., sings "Adeste Fideles" as Pope Francis concludes Mass marking the feast of the Epiphany in St. Peter's Basilica at the Vatican Jan. 6. (CNS photo/Paul Haring) 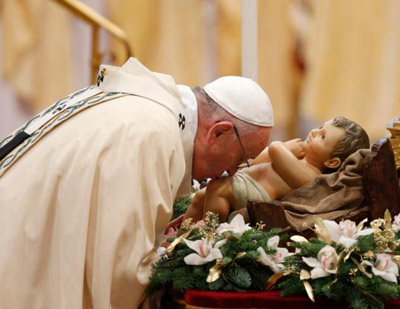 Pope Francis kisses a figurine of the infant Jesus at the start of Mass marking the feast of the Epiphany in St. Peter’s Basilica at the Vatican Jan. 6. (CNS photo/Paul Haring)

VATICAN CITY (CNS) — Go out and seek the signs God is offering everyone today that will lead to Christ, Pope Francis said.

The thirst for God is present in everyone, and it’s the church’s task to help those with “a restless heart” by pointing them to the true light of Christ, the pope said Jan. 6, the feast of the Epiphany, which marks the manifestation of Jesus as savior to the world.

In his homily during Mass in St. Peter’s Basilica, the pope said the church’s mission is to help people “know the face of the father” by first receiving “God’s light and then to reflect it. This is her duty.”

The church must always remember, however, that the light it shares is the glory of the Lord. “The church cannot deceive herself into thinking that she shines with her own light. She cannot,” he said.

“Christ is the true light shining in the darkness. To the extent that the church remains anchored in him, to the extent she lets herself be illuminated by him, she is able to bring light into the lives of individuals and peoples,” he said.

It is only by receiving this divine light that Christians can be true to their vocation of proclaiming the Gospel, which is not proselytism, not a mere profession and “not simply one option among many,” but an obligation, he said.

The Three Wise Men who come from afar seeking the promised king show that “the seeds of truth are present everywhere, for they are the gift of the creator, who calls all people to recognize him as the good and faithful father,” the pope said.

“The church has the task of recognizing and bringing forth more clearly the desire for God, which is present in the heart of every man and woman,” he said.

“Like the Wise Men, countless people, even in our own day, have a restless heart, which continues to seek without finding sure answers,” he said. “They, too, are looking for a star to show them the path to Bethlehem.”

But Christians must also keep asking and looking for the Christ child as well, especially in today’s age, and “to seek the signs which God offers us, realizing that they require our diligence in order to interpret them and, therefore, understand his will.”

“And once we have found him, let us worship him with all our heart, and present him with our gifts: our freedom, our intelligence, and our love,” the pope said.

As people follow the light that “streams from the face of Christ full of mercy and fidelity,” he said, do not forget that this light is also “very small,” coming from a tiny, humble child in a manger.

“True wisdom lies concealed in the face of this child. It is here, in the simplicity of Bethlehem, that the life of the church is summed up.”

While Pope Francis and thousands of people were at Mass in St. Peter’s Basilica, thousands more lined the main boulevard leading to St. Peter’s Square for the traditional, folkloric Epiphany celebration. Marching bands, Roman gladiators and hundreds of people in Renaissance costumes paraded up the street along with the Three Kings and real camels.

At the Angelus at midday, the pope said the revelation of Jesus to the shepherds and the Three Wise Men “teaches us that in order to encounter Jesus it is necessary to know to look up to heaven, to not be withdrawn into oneself, but to have a heart and mind open to the horizon of God, who always surprises us, to know to welcome his message and respond quickly and generously.”

The Three Wise Men also compel “us to not be satisfied with mediocrity, to not just stumble along in life, but to seek out the meaning of things and to look deeply at the great mystery of life with passion. And they teach us to not be scandalized by smallness and poverty but to recognize the majesty in humility and know how to kneel before it.”

Finding that star, such as the Gospel, is a source of great joy and consolation, he said, because one feels “guided and not abandoned to our fate.”

“Without listening to the Gospel, it is not possible to encounter” Jesus, he said.

The pope asked people to pray that the Virgin Mary “help us turn our gaze away from ourselves, to let ourselves be guided by the star of the Gospel in order to encounter Jesus, and to know how to lower ourselves in order to adore him.” 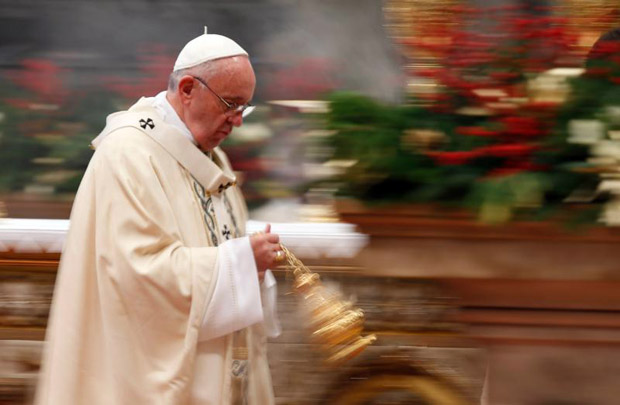 Pope Francis uses incense as he celebrates Mass marking the feast of the Epiphany in St. Peter’s Basilica at the Vatican Jan. 6. (CNS photo/Paul Haring)

NEXT: As God in flesh, Jesus is also mercy incarnate