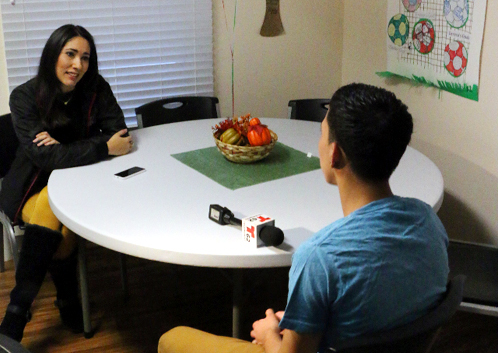 A reporter speaks with one of the young residents of a Catholic Social Services group home for unaccompanied minor refugees. (Photo by Mark Cordero) 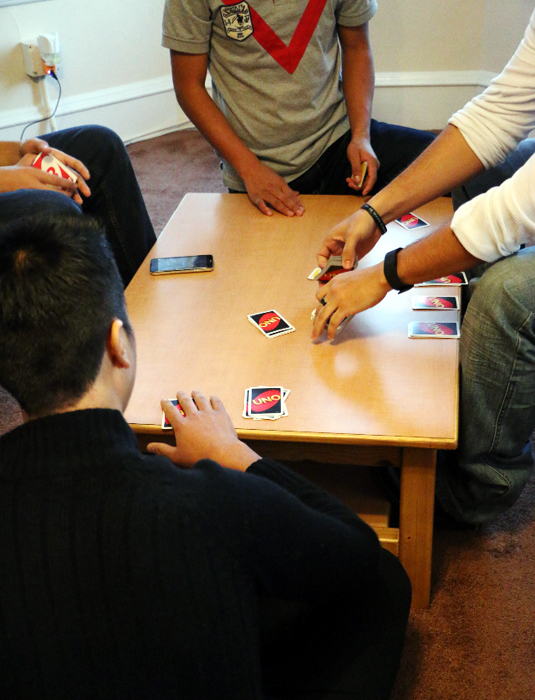 Some of the young men staying at Bridgewater play a card game. (Photo by Mark Cordero)

One wants to be a disc jockey, another loves motorcycles and plans a future as a mechanic. Others are focused on their studies. They do not all share the same faith but they do pray together several times a day.

There’s a darker side to the similarities that brought these youths, ages 15-18, together. They are unaccompanied minor refugees who struggle with English, and whose faces remain blank when asked if they’d ever heard of Disney.

They miss their families. Their memories are not of happy times but of war, violence, poverty, murdered family members. Their dreams are typical of their ages. But the nightmarish experiences of their young lives — and the fact that they can’t use their real names or have their pictures taken — are not.

But for a time on Thursday night, Jan. 7, these young guests who found their way to the United States from Central America and other countries including Democratic Republic of Congo and Afghanistan gathered in Bridgewater’s dining room to hear words of encouragement and to enjoy a specially cooked dinner.

(View a photo gallery from the group home here.)

The event was hosted by Catholic Social Services to help mark National Migration Week (Jan. 3-9), meant to raise awareness of the hardships faced by migrants, including children, refugees and victims of human trafficking.

The theme of the week, “A Stranger and You Welcomed Me,” seemed a fitting one for the sometimes jovial, occasionally uncertain residents of Bridgewater.

A group home of Catholic Social Services’ St. Francis-St. Vincent Homes for Children, Bridgewater opened its doors in September and serves as one example of how the church demonstrates its support for migrants and refugees. Homes like Bridgewater have the support of the United States Conference of Catholic Bishops, said James Amato, secretary for Catholic Human Services of the Archdiocese of Philadelphia.

As residents, the boys are expected to learn such household chores as cooking and cleaning. They attend Bensalem High School, which has an exceptional ability to adapt to different language needs. There’s also time for recreational activities, especially the boys’ favorite, soccer, Amato said.

“We try to provide as much of family life as possible,” he said.

It takes time for many of the kids to feel at home. Many don’t talk to anyone when they first arrive.

“The kids are in culture shock in the beginning,” said Omar Alegria, the residential manager of Bridgewater. “In a matter of days or weeks, a transformation takes place and they will begin to talk to the staff.”

Once the ice is broken, the kids begin to understand that the staff is aware of their experiences and are willing to listen. Outpatient counseling is provided to help the new arrivals cope with such horrors as witnessing the murder of their parents, persecution, or human trafficking, Alegria said.

The guest speaker for the program Thursday night was Oscar Budejen, a Philadelphia business leader, a member of St. Thomas Aquinas Parish in South Philadelphia, and once himself a refugee.

Budejen held his audience spellbound as he recounted his own family’s ordeal, forced to leave Cuba with nothing but the clothes on their backs. But his hard work, determination and a passion to reach his goals brought him to success.

He outlined his five-point formula that his listeners could use as a guide to realize their dreams of creating new lives for themselves: character, charisma, confidence, courage and communication.

All the refugees are in the process of seeking legal residency in the U.S. and Budejen stressed the need for the youths to study, assimilate and take their place in American society. But he called on them to embrace their new lives with honesty, excellence in their endeavors and belief in themselves.

“You have more in common with each other — and with the people who live here — than you have differences. Learn, and help and support each other. And ask questions. Everything is possible,” Budejen said.

Msgr. Edward Deliman, pastor of St. Charles Borromeo Parish in Bensalem, also attended the event. He called the presence of the refugees in the community a blessing.

The Bridgewater residents attend Mass and social activities at Our Lady of Fatima Center, the former Bensalem parish which became part of St. Charles and remains a spiritual home for many Latinos in the lower Bucks County area.

“It enriches your community when you welcome people who come from different places,” Msgr. Deliman said.