The One among us we do not recognize

Pope: Being Christian is doing God’s will, not just talking the talk 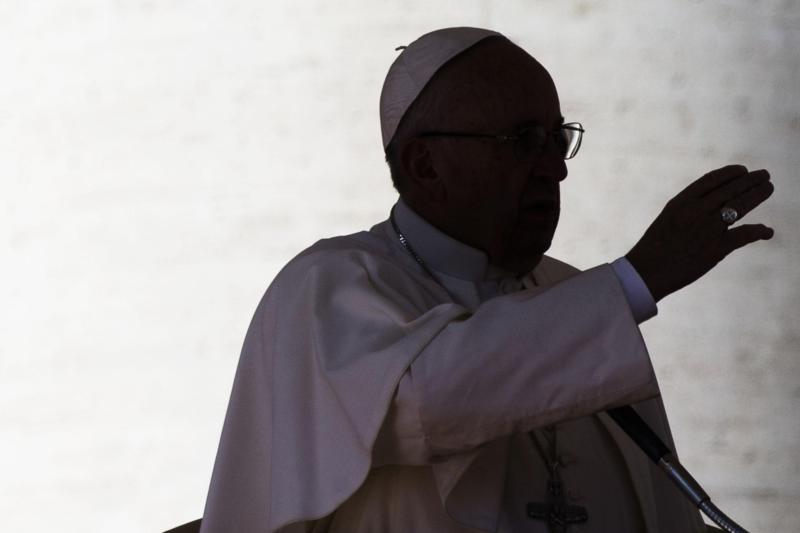 A silhouette of Pope Francis is seen in St. Peter's Square at the Vatican Feb. 20. For a Christian, talk is cheap; the faith requires concretely doing God's will and serving the least as well as those around you, Pope Francis said at his morning Mass Feb. 23.(CNS photo/Angelo Carconi, EPA)

VATICAN CITY (CNS) — For a Christian, talk is cheap; the faith requires concretely doing God’s will and serving the least as well as those around you, Pope Francis said at his morning Mass.

“God is concrete” and so is the Christian life, he said Feb. 23 during the Mass in the chapel of the Domus Sanctae Marthae.

Christianity isn’t a religion that’s all talk because “just talking leads us to vanity, to pretending to be Christian,” he said.

The day’s reading from the Gospel of Matthew (23:1-12) describes Jesus telling the crowds and disciples to beware of the scribes and Pharisees, who have taken on the authority to teach but do not live as good role models. “For they preach, but they do not practice,” Jesus says.

This kind of hypocrisy still exists, the pope said, according to Vatican Radio.

“How many times we meet people — including us, you know — so often in the church (who say) ‘Oh, I am very Catholic!'” But, the pope said, look at how they live their lives.

These people may justify themselves by saying, “‘Well, I am very Catholic, you know. I belong to this group.’ This is the religion of all talk. I say I am this, but I do what’s worldly.”

Talking without doing “is a deception,” he said. This path “leads us to where these doctors of the law were, these clerics, who like to dress and act as if they were royalty, you know? This is not the reality of the Gospel,” the pope said.

God wants people to stop doing evil and to learn to do the good, he said. “Being Christian means doing — doing God’s will.”

On judgment day, he said, “what will the Lord ask us? Will he say to us: ‘What have you said about me?’ No! He will ask about the things we have done.”

Fulfilling the deeds listed in the Gospel of Matthew’s “The Judgment of Nations,” such as clothing, feeding and caring for those in need, welcoming the stranger and visiting the imprisoned, “is the Christian life,” he said.

The pope prayed, “May the Lord give us this wisdom to understand fully what the difference is between saying and doing and teach us the path of doing.”

NEXT: Be a happy Christian: Show teens the joy of your faith