Philadelphia priest again prays with pope, this time in Mexico 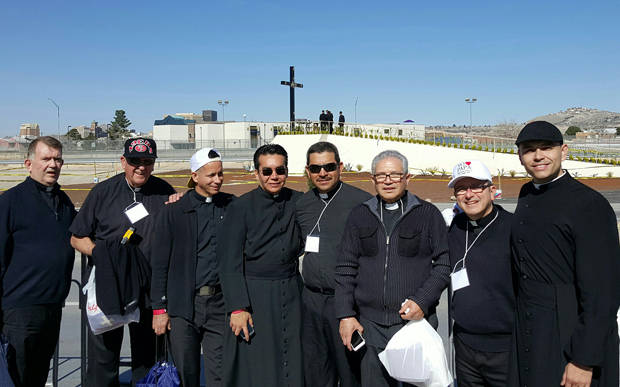 Father Robert Feeney, left, prepares to enter the site of a Mass with Pope Francis this month in Ciudad Juarez, Mexico, along with priests, deacons and seminarians of the Diocese of Las Vegas. One of those priests, Msgr. Gregory Gordon (second from right), is a friend of Father Feeney.

Many priests got to concelebrate Mass with Pope Francis when he visited Philadelphia on Sept. 26-27 last year. Father Robert Feeney, pastor of Our Lady of Peace Parish in Milmont Park, had a repeat with the pope on Feb. 17, but he got to travel to Ciudad Juarez, Mexico, to do it again.

Concelebrating with the pope in one’s own diocese is awesome; following up with another such Mass in a foreign country does add an exotic touch.

One of his classmates at St. Charles Borromeo Seminary, Msgr. Gregory Gordon, is a priest for the Diocese of Las Vegas and pastor of St. Anne, a huge bi-cultural parish in that city. He was running a pilgrimage to Mexico for the papal visit and he invited Father Feeney to come along.

Actually Msgr. Gordon is Philadelphia born, from Mother of Divine Grace Parish in Port Richmond. Although his family moved to Las Vegas he returned to Philadelphia for his seminary studies, but he was ordained for Las Vegas. Father Feeney also happens to be from Port Richmond and as a matter of fact Msgr. Gordon’s grandfather was his barber when he was a kid.

As another home-town touch, on the day they were leaving Las Vegas for the 300-mile trip to El Paso, which is directly across the border from Ciudad Juarez, Bishop Joseph Pepe, a former Philadelphian and now Bishop of Las Vegas, celebrated morning Mass, blessed each of the pilgrims and gave them their official badge.

Crossing over into Juarez at 4 a.m., a time dictated by the security people, they passed through some clearly rough neighborhoods. The city has the reputation of being a center for the illicit drug trade and the ninth most dangerous city in the entire world. That was not evident on this day.

“We saw none of that. We saw the great faith of the people. They were singing and dancing,” Father Feeney said.

The approximately 500 priests were taken to a special gathering point in the town where they were fed by the people even though Father Feeney observed, “they had nothing themselves. All they wanted to do was help us and feed us. They were so happy to see so many priests, they were asking for our blessing.”

They were bused to the Mass site at 10:30 a.m., and possibly the hardest part of the day was waiting in the 88 degree heat for the Mass scheduled at 4 p.m.

If anything, the enthusiastic welcome Pope Francis received was greater than that in Philadelphia. “They just wanted to be near the pope,” Father Feeney said.

The only drawback for himself was that he was the only person on the pilgrimage who did not speak Spanish. “I read the homily on the Internet afterwards,” he confessed.

Although they did not encounter the long lines and rigorous security checks that Philadelphia endured, there was one minor inconvenience. “There were no buses afterwards. We had to walk the three miles to the border crossing,” he said.

Again as in Philadelphia, the pilgrims happily walked the distance at the end of a memorable day.

PREVIOUS: Glenside students take charity from the class to the community

NEXT: Shanahan students take on four weeks of fasting to ‘live simply’